Design of a scythe bicycle?

In ancient times, scythe chariots were all the rage. Sporting meter-long blades, they were a terror for primitive warriors. I presume that means that, unlike in bad Hollywood movies, the scythes were mounted to a fixed axle mount or a non-rotating axle, so they did not spin randomly with the wheel but remained always at an optimal angle.

In the wild places at the disputed border of West Canada [Nebraska/Dakotas], the need for similar weapons has emerged. The Zeta Empire controls points southeast with an iron hand, but their attacks on West Canada are limited by the presence of Chinese peacekeeping troops based predominantly at former nuclear sites. If a town defies them by sheltering refugees, erecting any significant fortification, let alone fighting back, they attack it with great malice; yet they dare not hold new territory boldly enough to give the Chinese an excuse to move in. (The Chinese, in turn, are prevented by international politics from moving in without a passable excuse) Their tactics involve small units that raid and terrorize the civilian population, stealing valuables and extracting tribute. They mount crude barricades set up at the neighborhood level carrying bicycles they can use sustainably after the fashion of the Taliban. They carry sidearms on these raids, but rarely use them, preferring to intimidate with blades and air-injection tattoo guns. (Their own elaborate markings mean they cannot infiltrate)

Their scythe bicycle tactics are (loosely) modelled on bicycle police, somewhat augmented with fibergraphene body armor and bicycle frames. Namely, they use the bikes to control/disperse large crowds of civilians or groups that assemble against them, while trying not to be hauled down and clubbed to death by a furious mob heedless of consequences.

The question is what length and design is most realistically plausible for the scythes on the bicycles? (Presumably rear weels.... Ideally these should allow for rapid safe-ish manual transport over walls and rubble under adverse circumstances)

I was watching this sweet scene of Mongol horsemen with dual sabers.

This is what you have in mind I think. Lots of ride-by saber slashings. But the horse is heavy and gives you good leverage. The bike not so much. Plus it is harder to poke a stick thru the spokes of a horse because the spokes are all internal.

So a tandem bike! With solid wheels instead of spokes because of the stick problem. Your front guy can pedal and steer and is chosen for his mass which is mostly muscle. They tell him it is all muscle. Your back person is in charge of slashing and can also help get up to speed to escape if things get hairy.

Of course if two is good three is better. Something like this with the dual saber riders would be unstoppable. 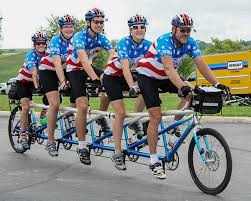 Unstoppable I tell you! When the townspeople hear the bell of this warbike menacingly dinging in the distance they dig themselves right into the ground and pretend they are already dead.

3
How to attack with War Lice?