Eye size and pupil shape of an over 6ft tall ambush predator?

They're built in such a way that they can stalk and chase their prey on all fours like a feline can, and then easily return to digitigrade twoleggedness for everything else in their life (this is a species of alien people, not animals). They are over 6ft tall normally when bipedal.

Maybe you can convince me that they don't need to get on all fours to hunt prey, but that's a question for another day.

If it makes a difference about their eyesight, their planet is tidally-locked with a red dwarf star.

Forward-facing eyes with round pupils, probably not much bigger than a human's, if at all.

Your creatures are predators that seemingly rely a fair bit on vision, therefore, the best configuration relative to the skull would be a more forward facing one, as it allows a wider range of binocular vision, making them better at perceiving depth. As for the pupil shape, let's look at a very useful chart: 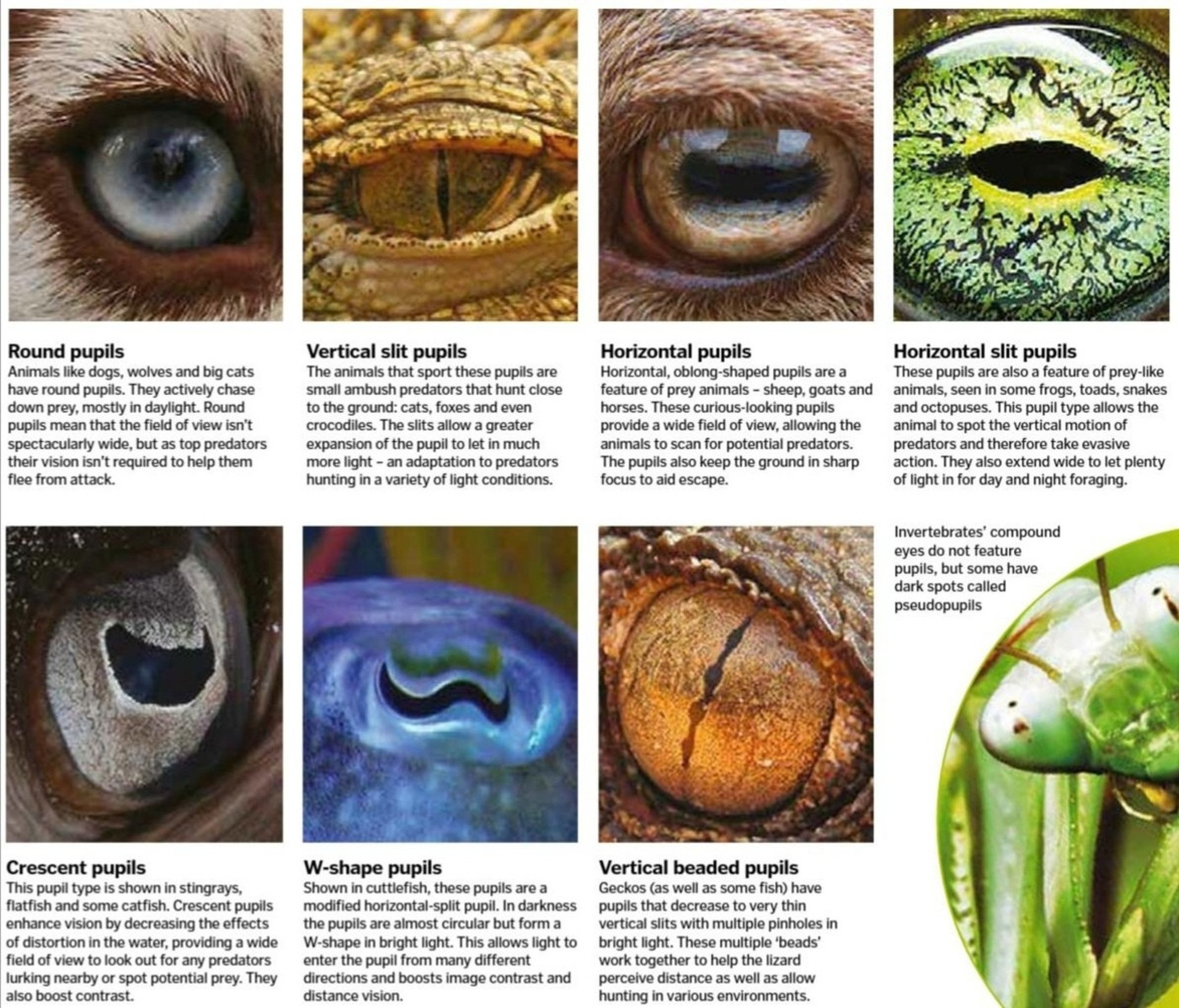 AS explained in it, your creature's best pick seem to be round pupils, as, being a predator, they seem to live in conditions much like those of a human, bear or large feline, meaning that they would likely benefit most from the classic round pupils.

Eye size is where things can get funky. For example: some eagles, despite having much smaller skulls, have eyes nearly as big as a human's, since they need their vision to be top notch, and the bigger your eyes, the more space for light-detecting cells you have (for example: in the modern day T-rexes are assumed to having had pretty powerful eyesight, especially since they had eyes about the size of an orange).

If your creature relies mostly on its vision, it might have eyes bigger than an average 6f tall human's, but if it relies more on smell, hearing or both, then human sized might be more than enough (especially if their eyes are more anatomically similar to a bird of prey's, as that'd mean they'd have no problem spotting things from afar, be it their prey from over a mile away or an ant from the top of a 10-story building).

The largest terrestrial predators are big cats, bears, wolves, and humans. (And, I suppose, other large primates.)

Cats and humans are probably the best ambush predators from the group. So, eyes like humans or cats. More likely humans, since we're around 6 feet tall and bipedal, descended from semi-bipedal ancestry.

"Bipedal" and "predator" make me believe that the most optimal configuration of eyes for this creature is eyes on the front of its head, which can see further due to being further off the ground. Additionally, predators don't need to look to their sides. They're the threat - they don't need to look for threats, at least to the level of having eyes optimized for it. 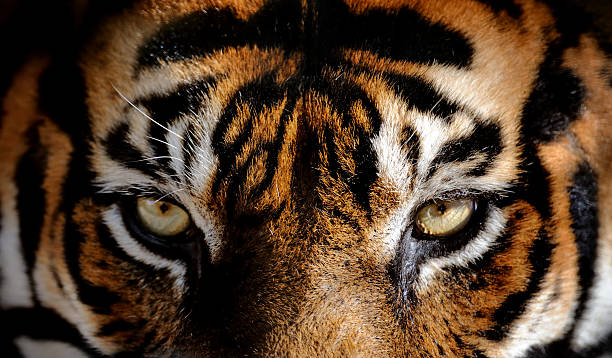 Pupils
The standard answer most biologists would give you is that the pupils would be vertical slits because this allows better judging of distances:

Species with pupils that are vertical slits are more likely to be ambush predators that are active both day and night. In contrast, those with horizontally elongated pupils are extremely likely to be plant-eating prey species with eyes on the sides of their heads. Circular pupils were linked to “active foragers,” or animals that chase down their prey.

There is a complication though. This benefit decreases as the height above the ground increases. An intuitive explanation for this is that vertical slits allow better focus in the horizontal direction at the cost of worse focus in the vertical direction. For prey of equal size, a larger animal needs to to look down more, which means that the vertical focus is more important.

The remaining two cues [of distance], binocular disparity and blur, work together with vertically elongated pupils and front-facing eyes, the researchers said.

Eye size
Things get a little complicated here. Leuckart’s Law states that the faster an animal runs, the larger its eyes need to be in order to avoid obstacles. Larger animals also need larger eyes for the same reason. Both of these effects where shown to be significant in this study, although weight was found to be a more accurate predictor.

Not the answer you're looking for? Browse other questions tagged xenobiology aliens .

110
Would intelligent life evolve any other body plan than humanoid?
14
What would be the psychological differences between a human and an intelligent detrivore?
4
Biological touch based high bandwidth communication
7
Giant bug noises
7
Can a creature have a strong, but flexible neck?