Can soil save my city under siege by cannons?

In my Islamic city, where medieval siege cannons are starting to be used, I'd like a better defense than just walls. I am proposing to the Sultan, that behind the stone walls we add a volume of packed dirt. The design of the cross-section is as follows.

10m high / 3m thick stone wall, backed by a compressed dirt wall that is just as high, but adds an additional 10m thickness, then gently slopes down to ground level at an easy 1-to-12 slope. If it's relevant, the circular fortress around my town is a ring with a radius of about 700m, heavily defended from above; no tunnels in the soil or anything like that.

Will an earthen barrier make a huge difference, or is it just a minor help?

Please don't point out the huge weakness, which is the gated entrance, unless you have an engineering solution (much appreciated): the entrance weak-point should remain not-relevant. Answers in magnitude of order ("it's a huge help, because..." / "not worth it, because...") are fine, but specifics are helpful.

Engineers early in the gunpowder age would build defences outside the walls, rather than inside. One of the most common approaches was to build wooden retaining walls in front of the stone walls and fill the spaces between with dirt. Given enough time and resources, this can be quite elaborate, with compartmentalized sections and even two layers of wood and earth if time and resources permit.

If the siege is already started and sending engineers outside isn't an option, bundles of wood could be lashed tightly together and lowered in front of the walls to absorb the impact of the cannon balls. Another approach was to make "baskets" filled with earth and lower them in front of the walls as well. In the modern era, "Hesco" bastions are a revival of the idea, steel basket frames covered with heavy duty fabric and filled with earth to absorb RPG fire, shockwaves from vehicle born suicide bombs and shrapnel from mortar and artillery fire, so we know this approach works.

Since there will be a lot of force on the wall, re-enforcing the inside of the wall with timber buttresses or even just logs leaning against the wall to form triangular braces will help strengthen the walls, without taking up too much of the interior space. Moving around near the wall will be more complicated by the bracing, so any reserve or sally force should be in the city square ready to race to the affected sections of the wall, rather than trying to move around the perimeter.

Traditionally, gates were the most heavily built parts of the walls, almost as strong as the keep itself. The best way to protect the gate and allow some freedom of movement would be to place a "V" shaped Ravelin ahead of the gate preventing a direct view of the entrance, which would have to be taken and demolished to allow a battery to be placed in front of the gate, but this was developed in the 1600's by Vauban, earlier versions might be detached walls or even a small, separate blockhouse type fort to shield the gate from view and fire.

The real key is the time and resources the garrison of the fortress city has. Building a full set of walls outside of the curtain wall is expensive, time consuming and impractical for most places. In real sieges, what often happened was the engineers would rapidly throw bundles of wood or soil filled baskets in front of the walls that were being fired upon (or where the engineers assessed the enemy batteries would most likely to be placed), and rush out at night to repair the damage and build up new fortifications as needed. This was feasible because the expense of the artillery train was beyond all but the wealthiest lords and even stretched the resources of most Kings, so the defender might only face one or two batteries of large and relatively immobile siege guns in this period, making the problem much more reasonable.

Are you only worried about the cannons breaching the wall, or are the other realities of running a walled state important? The berm you just described will consume 25% of the total area within the walls due to the sloping region behind. That is quite an expense.

Also, consider that packed dirt can actually put quite a lot of force on the bottom of a stone wall. On a smaller scale, it is not unheard of for someone to make a raised planter against a shared cinderblock wall, only to have the force of the weight of the soil do damage to the wall, or even make it fall.

The advent of gunpowder siege cannons rendered the fortifications vulnerable, but cannon technology was not sufficiently advanced to capture the city on its own, and the walls could be repaired between reloading. Ultimately the city fell from sheer weight of numbers of the Ottoman forces on 29 May 1453 after a six-week siege.

"Vulnerable" yet not exactly susceptible. Your 10m high / 3m thick stone walls are almost good enough, assuming you also filled yours with a material (ideally, sand) capable of absorbing and distributing inertia:

The inner wall is a solid structure, 4.5–6 m thick and 12 m high. It is faced with carefully cut limestone blocks, while its core is filled with mortar made of lime and crushed bricks.

Note, the inner wall is only one of three and there's also a moat. You're on the right track, having an earthen terrace behind your first wall, but it doesn't have to slope down (which might also make it harder to defend from), it just has to lead to wall number two, ect.

Engineering an Empire, The Byzantines: 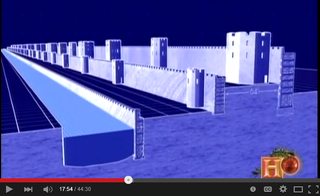 My rudimentary understanding of physics tells me that an earthen embankment directly behind a stone wall would make it more susceptible to cannon fire. It would provide the ball with an anvil to strike, against which the wall sits. Dirt would also hamper repair efforts. Notice how the main wall is gigantic and free standing. The dirt in front of it, is most likely there only to discourage undermining (that's IMO - I'm not exactly sure why that area is filled).

Change Work Order : Dig moat and place spoils as foundation for new walls, two and three, which will be engineered to better withstand cannon fire with the ease of repairability remaining paramount.

Not the answer you're looking for? Browse other questions tagged warfare cities medieval .

19
Can I make a movable medieval city?
27
What's the biggest medieval city I can make?
30
How long can a medieval siege last?
4
How to retrieve cultural artifacts from a world under siege?
7
Can I build a self sufficient medieval city?
4
Siege technology for floating city
7
Siege defences for a floating city
18
How do we defend the great canyon city of Hurr from siege?
10
How can a religious order prepare their abbey for a siege?
4
A city under supernatural siege: sounding a proper alarm