My question is : Is it possible to have a hot desert planet with no significant vegetation with the surface mainly covered with liquid water?

Normally, we should expect to have rain overland because of the difference of temperate and pressure between the land and the ocean. But can I make it so that it doesn't rain or only rarely over the whole planet?

Edit: What about chemistry? The atmosphere could be radically different.

If you are okay with messing with the atmosphere you could provide a strong "sunscreen layer" in the upper atmosphere to block the majority of the non-visible light. Imagine something like this, but not as hot and closer to the surface. 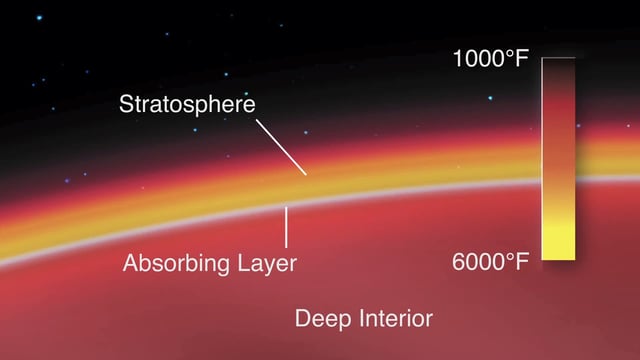 A strong temperature inversion like this would create a very hot layer above a much cooler more stable layer, and still conceivably allow you to see. If close enough to the ground, and strong enough, it could prevent most if not all convection processes at surface level where rain forms. The mid-western U.S. has a much smaller and weaker version of this called the "CAP." This hot layer of air from the desert southwest can completely shut down even explosive weather scenarios by acting like a glass ceiling, stopping even a single storm from forming. The upper atmosphere would have storms, but out of reach of the moisture from the oceans. All you need for this to work is to have the temperature increase as you go up in altitude. Since convection requires cooler air for warm air to rise into, this would effectively shut that down.

Since about half of your planet is covered in oceans, there would be still be fog at or around sea level. This is almost unavoidable in any scenario. But at any higher elevations there wouldn't be fog, or even really clouds. Think of the Atacama Desert in Chile. Hundreds of years without rainfall, yet around the ocean there is cactus, and other flora that thrives solely on the fog. 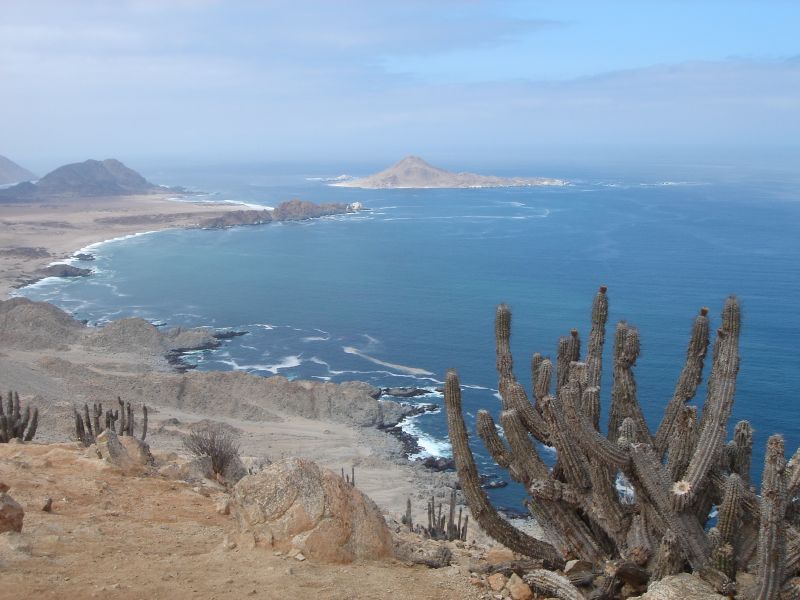 The weather of your upper atmosphere including overcast, broken cloud cover, lightning, or clear skies would appear to slide over an invisible plane, like being underneath a glass coffee table. Your view can change drastically based on the make-up of your atmosphere. The lower and mid atmosphere would nearly always be clear of clouds.

Your planet would be very humid, like the north Persian Gulf in summer, and there would be minimal or no surface wind to change that. That does depend on how warm you need the surface to be though, it could conceivably be near freezing if you want. The important thing is that whatever the surface temperature is, the upper atmosphere would need to be much hotter in proportion. Also the temperature would be a very constant thing even through the day/night cycle as the upper atmosphere would act like a colossal blanket, trapping the heat inside. And strangely, when you hike up in elevation the temperature would always increase as you ascend.

I am not all that familiar with chemistry and the properties of gasses. But you would need a mix of gasses that would block UV radiation, while also blocking and trapping infrared radiation, all without blocking most of the visible light.

My first thought for a way to achieve this is to have a life form, perhaps an algae of some sort, that lives in the ocean. It lives on the surface and forms massive mats that all link together. The result is that it cuts evaporation of water from the ocean to a tiny fraction of what it would usually be.

If you're looking to not have it rain over land and thus not producing vegetation you could have all large landmasses ringed with high mountain ranges. As the clouds move higher to get over these mountain ranges, they'll precipitate, leaving the clouds free of moisture as it moves inland. This process is called Orographic lift

Don't know how you could limit rainfall without messing with the structural underpinnings of land distribution and atmospheric layers. But you could go the other way, have torrential rain every day, no vegetation, and limited access to water.

If the regolith of the world is coarse enough it won't retain any soil water and if the rain is heavy enough it will wash the fines created by erosion out into the ocean basins, leaving nowhere for plants to get a foothold. Continuing production of such a regolith could be justified by a prevalence of intrusive, therefore coarse-grained, silicates and strong chemical weathering from a slightly sulfurous atmosphere to remove organic and calcareous deposits in solution instead of generating land-bound sediments from them.

I have always really hated one-biome science fiction worlds. I'm an ecologist and biogeographer, and it's just so implausible that in most cases it kills my suspension of disbelief unless it's really well thought through. Luckily, I think a desert is probably the most plausible single biome - a planetwide jungle beggars belief, but a desert is defined by scarcity, not by richness.

The fundamental problem is that a largely oceanic planet would have a great deal of evaporation, and so it would have big, powerful tropical storms originating around the equator and wandering all over the place. A powerful hurricane can get quite a ways inland, especially on a smaller island or continent, and would dump a lot of rain. Deserts are defined by rates of evaporation and evapotranspiration exceeding rainfall input. Depending on location and latitude - Hadley cells would arise on any reasonably Earthlike planet- some islands could be situated in desert belts, but areas would unavoidably develop other biomes.

Now, anybody who's hung out in Baja or the west coast of South America for a while can attest to the fact that it's eminently possible for a desert and a maritime area to coexist, but there's a reason the Atacama Desert isn't the entire continent of South America.

As answered above, one way out might be a very young world, like less than a billion years old, where the atmosphere is highly reducing, life has not really developed on land and the land masses are basically just naked, weathered rock and regolith. It wouldn't look like a classic terrestrial desert and there'd probably be rain aplenty, but it would be suitably barren, lifeless, and desolate. The interesting twist there would be that it's a completely open planetwide niche for any terrestrial life that might get a toehold - an entire biospere erupting from the crud under your fingernails!

Not the answer you're looking for? Browse other questions tagged science-based climate deserts or ask your own question.

7
How to explain it rains only/always when there is no daylight?
12
Single biome (hot) desert planet, possible?
6
What could cause the desert?
3
What would the climate on a planet with 85% or more of the surface area covered in water be like?
5
Habitability of a planet with highly variable temperatures
10
Could Earth still survive if we lost almost 90% of all surface water?
8
Water planet turns into desert world without being rendered uninhabitable
8
How much surface water do I need for plate-tectonics on a planet?
12
How to dry an ocean planet and turn it into a salty desert?
5
Possibility of a “hot Mars”