In my book series, the Aurean Empire has a very organized and professional standing military, heavily influenced by the Roman and Eastern Roman Empires, in which weapons and armor between soldiers is very standardized and provided by the state.

However, unlike either of those two Empires, the Aurean Empire is home to a number of sentient species, many with very different sizes, anatomy, and overall builds than normal humans. Here is a list:

-Satyrs (Humans, but with the legs of a goat and small, straight horns sprouting from their scalp).

-Minotaurs (The body of an absolutely jacked human, with the head, legs, and tail of a bull or cow depending on sex. Average height for males is around 6'10" and for women is 6'4").

-Tangolians (Anthropomorphic golden eagles with roughly human proportions, and their wings are pretty much just feathered arms so no flight. Their faces are by far their most animal-like feature, being just a bigger eagle's head).

-Zebus (See Tangolians, but are anthropomorphic zebras and quaggas instead of golden eagles and don't have feathered arms. They do have hooves, though).

-Merpeople (Basically just humans with blue-tinted hair while they're on land, but when underwater their legs turn into fish tails, they get gills, and their eyes glow blue).

-Seraphim (Basically just the common depiction of angels but their flight ability is severely limited - they can only hover about a foot off the ground).

How would the Aurean Military standardize equipment and weapons for such a species-diverse planet without essentially segregating the army by species?

Segregation by equipment is unavoidable within this context, but you can minimize it.

Weapons will remain standard throughout the board. Since they're all of human proportions this will remain a non-issue, with the minotaurs being the only ones who have slightly different loadouts due to your usual two-handed weapons probably being used as one-handed for them if their jacked-ness translates well into their grip and wrists.

Shields will also remain standard. You've said nothing about changes to their hands(except maybe the merpeople have webbing(not mentioned btw), but that shouldn't affect holding a shield) and I'll assume their hand sizes don't change much either.

Armour is where things get a little non-standard. Since you're basing them off of the romans I'll assume they'll be using pteruges skirts. 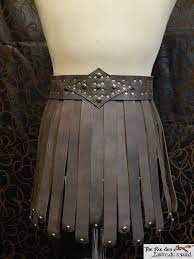 Everyone can use these, even the merpeople which will allow them freedom of movement between leg and tail forms.

The vast majority will also be able to use lorica segmentata or leather vests, with only the seraphim and the minotaurs being the ones needing either custom work for larger chestpieces or pieces that allow the use of wings.

Helms are also going to be a tricky tackle. Most species will be able to use a standard helm as well but with the minotaurs and the more animalistic species or the satyrs you're going to need some specialized work to allow for horns or odd skull shapes.

As for footwear, most of your species will not need a change in this. Those with humanoid feet can use the usual leather sandals, except the merpeople who'll be barefoot all the time unless they're never going to see water deployment for a particular skirmish, and those with hooves can either stop by the local horse ranch for horseshoes or go at it with their bare hooves if they want. The biggest ones to tackle(assuming biology follows), would be the tangolians, because they likely have some birdfeet. You can get by with leather straps around the legs but it's going to be hard to make things for their feet due to the high amount of articulation needed, so they might just go barefoot as well for the most part.

Where the species are similar, the regular human fitting will work. Where they are not similar, you have to break the fitting down to smaller parts that allow a modular assembly that suits their differences.

For example, a "standard helm" is actually several mended pieces. Certain pieces can be removed to allow a fit for the non-human shapes of some of the species. The Minitaur would remove pieces that prevent the horns and snout from fitting. The Eagle and Zebras only the snout portion.

The downside is waste. There will be a surplus of unused armor parts, but the manufacture would be streamlined and efficient.

Not the answer you're looking for? Browse other questions tagged weapons military armors interspecies-relations military-organisation .

10
Would an anthropomorphic wolf species be able to hunt their prey without weapons?
4
What kind of weaponry and tactics would be effective against a plant based species?
7
Would a society with two different species that can interbreed be viable?
6
Armor design for bird people? | Gliding
25
How can an inn's dining room furniture be designed for different sized species?
2
How does one defend a military depot against Nazi-ish Sasquatch-vampires in a continent-sized post-apocalyptic wasteland?
3
How would an Army assign troops to units?