Sail Plan For A Flying Vessel

What precisely is the ideal sail placement for a ship that flies?

Anti-Ballast which is basically a rock that pulls up is the key technology here, allowing the construction of a framework (essentially a reversed arrangement of a ships usually keel) for a ship that floats (so long as you do not overload your ship or design it to heavy). Initial designs for this ship are essentially vaguely hydroynamic (not areo) bricks made of wood. So, if this vessel was to be propelled by wind, what would be the ideal placement and design of sails for this flying vessel, it requiring sails both capable of propelling it forward, but also prefferibly up and down to limited degrees. All without capsizing it or putting undue stress on its structural stability (as there is no water here to counteract the force of wind).

I've thought about space sailing before, as a sailor myself it's something interesting to be able to sail in 3 dimensions. For something to be in the sky I assume you have a solution to keep the boat afloat in the sky already without the use of sails itself. One of the major problems in this is the vertical control and without capsizing. Changing direction could be solved using extra fans on the bottom of the sip facing the rear as well.

When sailing the way it works is the wind will push against the sail and the keel keeps the boat from drifting sideways, essentially "squeezing" it forward. In the air, you don't have an opposing force of water pushing against the keel of the boat. This dilemma would also lead to the ship essentially "rolling" whenever it tried to move forwards. You would need an extremely heavy keel on the bottom of the ship to keep this from happening. You would also need some form of thrust on the bottom of the keep to allow you to "squeeze" forwards. This is a problem because you can't just solve this by placing sails on the bottom of the ship because the keel needs a force that is opposing that of the wind. If you place a propeller on the keel you could use this to oppose the force of the sail.

The problem with moving up and down

Moving up and down is a very had problem to solve here. Winds don't very often move up and down allowing for a movement like this. If you had a hot air balloon solution this could work, allowing you to control the buoyancy of the vehicle there for choosing the height. if on the other hand you want a "sail-based solution" you're going to have to get mechanical. Using something similar to bird wings you could push air down and up to control it, this would add sails on the sides of the ship that look like wings. You would need to power all the mechanics somehow in your universe, I assume you have this solved already. The movement up and down using wings might be the only solution because of how sailing works. As mentioned before the wind and pressure of the water "squeezes" the boat forwards. With no wind to add pressure at an angle, there is no way to move the ship in your direction using classic techniques. So I give you the wings idea.

Please try and ignore my lack of artistic skill. I'm a sailor, not an artist. 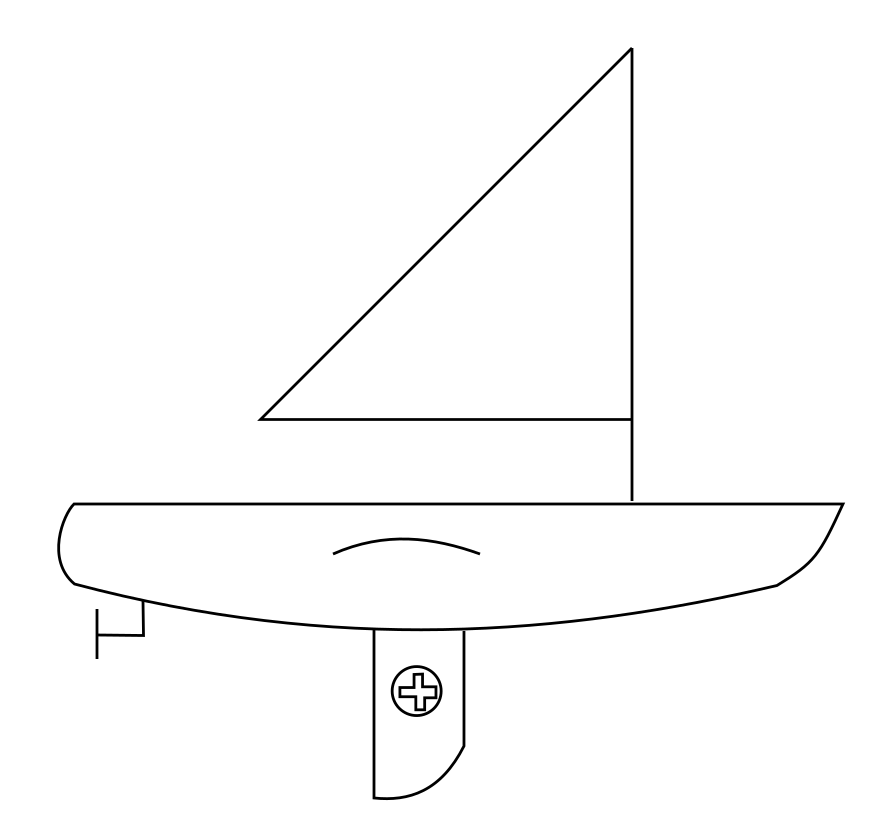 When I first read your question I immediately imagined a kind of dart shaped craft with the sails at the rear in a kind of fanned effect and every surface of the craft designed to provide lift in some way, and or shape the airflow so it goes around the sails as the craft moves forward and not into them so it does not degrade the sails effectiveness.

A set of I think they are called cannards at the front to give up down control or left / right rolling. Cannards are like the dive planes on a submarine but much better looking on a plane, flat control surfaces sticking out from the fusilage.

This would give the craft an automatic kind of raceing craft aesthetic I think.

Similar to an Airplane

A sailboat generates power from the interface between the air and water, not just from the presence of wind. If the water were moving in the same direction and at the same speed as the air above, a sailboat would be at rest relative to the air, and wouldn't be able to extract any power from sails. Similarly, a fully airborne craft will be fully "immersed" in the air stream, and will not be able to reliably sail any direction but will instead be carried along in whatever direction the wind is blowing.

However, if you were to attach your anti-ballast to a rope and suspended the entire craft from it, you could reel in and pay out the rope to alternately lift and lower the airship. The CG of the airship/anti-ballast system would not change in the vertical axis (raising the ship would lower the anti-ballast and vice-versa), but it would move the airship relative to the air around it. If you placed sails like an airplane's wings and tail you could glide forward, gaining forward speed while both rising and descending, as well as turn either with a rudder or by banking the entire airship (banking would technically work, but is not a good option for this type of craft, especially with fabric sails, a rigging mistake or gust of wind could violently roll the craft and throw the crew to their deaths).

You would want the tail to be mostly rigid or to employ very taut fabric, and either moved like the rudder of a ship, bent by pulling on lines attached to either side, or equipped with a moving control surface in order to steer. It would be possible to use conventional sail plans, but because they would be completely sideways, the booms would need to be under much more direct control, otherwise all they will wind up facing downward and you will only be able to generate useful thrust while moving upward. It may be easier to build a "wingsail" or something more structurally similar to a fabric and wood windmill blade (think classic Dutch windmills here). These sails or wingsails would need to be able to accommodate wind coming from any direction in the 180 degree forward arc of the ship. A sail would do this by adjusting the lines controlling the sails, while a wing would need to rotate on a pivot aligned with the pitch axis of the airship. You would want to put the axis of the pivot at or ahead of the quarter-chord of the wing(1/4 of the way from the leading edge to the trailing edge of the wing). At the quarter-chord you would experience little to no control forces aside from friction. A pivot ahead of the quarter chord would be somewhat self-tacking and at the very least stable.

The ship would likely start with the anti-ballast fully retracted. the process for a sail based variant will depend on the sail configuration, but for a winged variant, the wings would start pointed mostly down and slightly forward (probably within 10 degrees of straight down). Then the cable would begin paying out rapidly. Wings would generate "lift", but given that they're facing almost straight down, this lift would be thrust relative to the airship. As the forward speed increased, the wings would be slowly angled more and more forward. They would now start to generate an increasing amount of lift, which would slow the descent, but continue to generate thrust. Once the cable was fully payed out, the crew would need to wind it back up. How this is achieved I cannot say without more detailed knowledge of your setting, and it may be the case that the ship climbs too slowly to generate useful thrust. In that case the ship will lurch forward each time the cable pays out, then slowly raise itself back up, then the cycle will repeat. If the crew has some way to reel the cable back in quickly enough, they could angle the wings upward on the return to generate thrust in much the same way they did on the descent. This would also allow them to preserve their momentum from the descent and retain control authority. Note that you don't have to climb all the way back up. The ship could oscillate vertically over the span of just a few feet as long as the crew were quick and accurate enough on the wing/sail adjustments, and the reversals were fast enough (you will generate little to no thrust while reversing direction). Alternatively, with an inherently stable pivot point (forward of the quarter chord) springs or a specially designed steering canard could be used to adjust the angle of attack automatically, making these short pogo hops more practical.

I imagine its sails and overall design would very much make it end up looking like some sort of fish, with its tail section being its rudder which would also be one of its sails.

You're going to need more than one steering wheel if you don't have more advanced technology allowing a single pilot to control the sails, with each steering wheel manipulating each sail 'fin' individually. The fun/funny bit about this is that if you have a strong enough crew or have enough mechanical strength you might just be able to steer and move the ship without any wind present, pushing against the air with the sails like how a fish pushes against the water with its fins. You'd not get anywhere fast like this unless mechanically/engine assisted, but if you have engines then you'd not need the wind or the fin-like sails anyway so... maybe ignore that bit if you're adamant about wind only propulsion.

Not the answer you're looking for? Browse other questions tagged technology airships flying-machines age-of-sail .

8
What would an age of sail flying ship look like?

8
What would an age of sail flying ship look like?
18
Airship defence against pack of flying creatures
14
Armament for airships filled with non-flammable gas
9
Horizontal lane separation for flying cars?
9
Why do flying saucers have to spin while flying?
5
Age of sail navigation tools for a planet with a ring
2
Wind Powered Air Sailing Vessel
2
Age of Sail ship design to face rogue waves?
23
Are "bicycles" for flying species possible?