How many rival criminal gangs can this fairly small fantasy city support?

The following is the map I am using for a D&D city I've named "Braedon". (It's just a map I found on google image search that I colored in.) 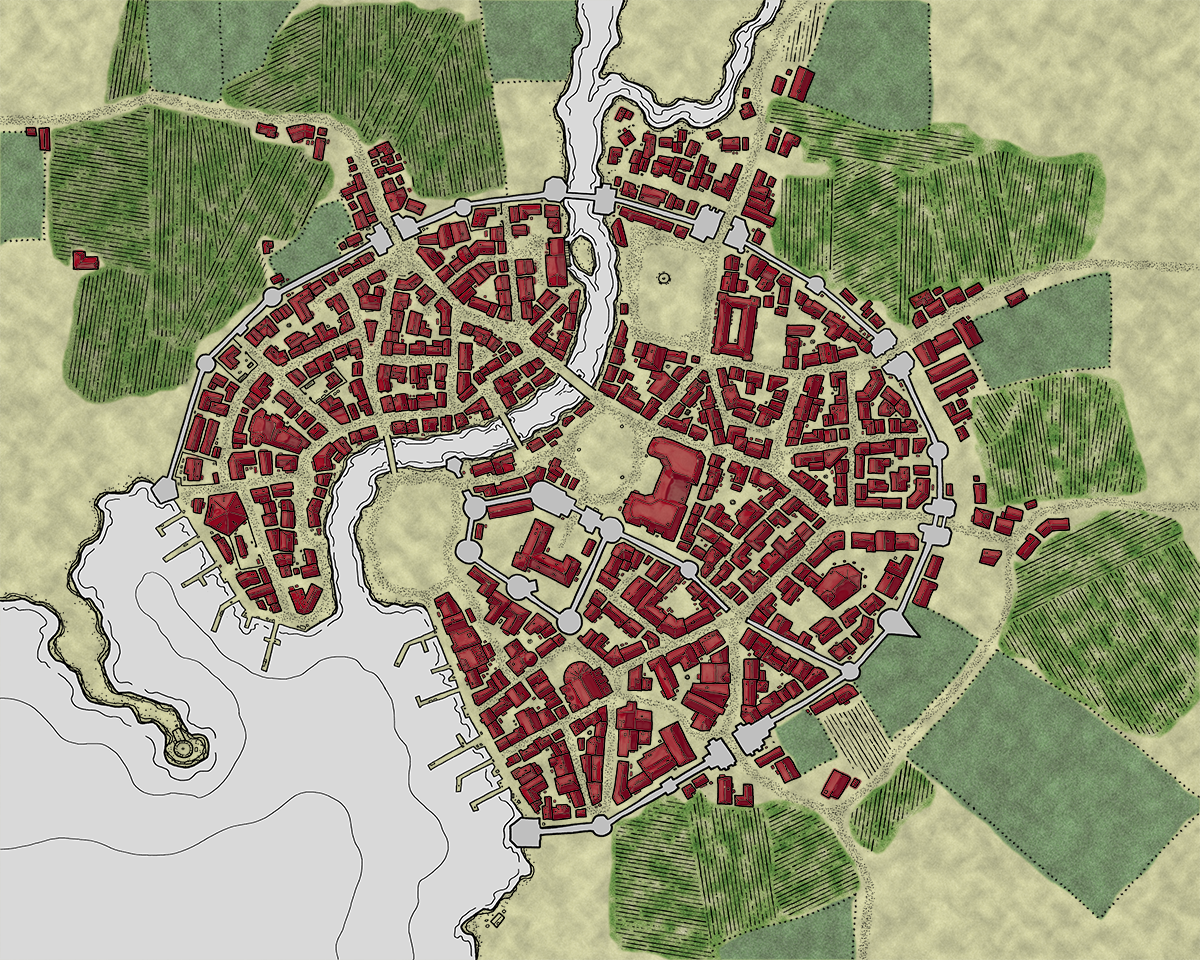 I have established that this is a city with a "Puppet Government", whose figurehead is entirely controlled by warring rival gangs throughout the city and/or the merchants and mages guilds-- whoever has the upper hand at the moment dictates what the "government" does. I am presuming that the population of this city state, including nearby incorporated small farming communities (not shown), is somewhere in the neighborhood of 10,000 people. (If this is an unreasonable assumption given what is shown here, let me know?)

The trouble I come to is that looking at this map I've selected, I'm not sure I can fit very many rival gangs. There are three clear regions I can see (west of the river, with east of the river split north and south)... would this mean I'm limited to only three gangs? Would my proposed Mages / Merchants Guilds cut into even that?

Given this map, how many gangs could I reasonably include? I really do want a fair number, enough so that it feels "gang ridden", not merely like there's a single mafia-like entity.

I can see at least seven gangs being possible, but really they'd be rather tiny gangs for a town of this size, which I suspect wouldn't be able to house 10000 and would be more apt to house 2000 if the building count is of any indication to population size.

The gangs, as I would name them, would be the:

The exact expanse of their influence or controlling territories would fluctuate a little over time of course, but if you don't really care for them to not be too large this is how I'd divide the area(except perhaps the rotwoods and the raiders since they'd have the largest available space/territories by default).

As for your mages/merchants, they'd probably be situated somewhere in the middle along the river, or in that fortified looking section since they'd probably have the clout and funds to build such a thing.

Doing some quick back of envelope math, The county of LA has roughly 10 Million people, there are roughly 500 gangs with 50,000 total members meaning that there's roughly a one gang member every 200 people in LA. Per this math there would be at most 50 gang members in your town. You can divide them into gangs as you see fit. But the smaller the town the harder it will be to remain anonymous so best to round down.

Some answers seem to concentrate on geography, but I think type of crime is a better starting place. You'd probably get at least one gang for each profitable kind of crime.

Smuggling, protection rackets, pick-pocketing, and drugs are all profitable crimes in a port city.

Any kind of magic that's illegal (or can be used for illegal activities) could also support a gang. Necromancy for cheap labor could be an option: you'd need a source of (fresh) bodies, to move those bodies in secret, at least one mage to resurrect them and give them orders... That sounds like enough for a gang. Bonus points: it's a mix of magic and mundane, so you can step away from the mages guild trope if you want.

The Port is Key

Even if the city is relatively small, if a lot of valuable cargo passes through it, then it can support an outsized criminal presence. If you think of the criminals as parasites, the port effectively makes the host much larger, which will allow for a larger parasite.

Mix and Match Sizes and Activities

Pick a couple of activities that you think are particularly valuable - say smuggling, cat-burgling the wealth merchants, and drug-running - and give each of those 2-3 rival gangs. Make these your large gangs, in the range of 100s of people.

The less profitable ventures also get 2-3 smaller gangs, but they are much smaller. Maybe there are only 50 pick-pockets in the whole city, and they work for 3 different groups, whereas smuggling employs 500 people in 2 rival gangs.

The big players may also dabble in the smaller ventures - one of the drug-runner groups also does extortion on the side, say.

So if you have ~6 types of crime and 2-3 gangs per type, you could have roughly 10-20 gangs, with some being very small, and others numbering in the hundreds. Since they can step on each other's toes even when they aren't directly competing, there's a lot of room for politicking.

The point of contention between them might just be the green-spaces on the SE side of the river - the SEasters claiming ownership because they're in their territory, the NWeasters - not having green of their own feel resentful and want equality. The SEasters seeing an opportunity to charge for entry into their territory.

Another area in which territory can be fought-over, conceded, reclaimed might be the isolated block at the north end of the town. Or maybe that's the posh part of town, the kids going out-of-town to a private school and looking down on the "gang culture" of the rest.

In my home town, it was west of the railway against east - or "The-Lodge" against "The-Road" each having its own secondary school catchment areas. The recreation ground was on the west edge of centre. No major violence per-se, but then low unemployment and fairly good conditions.

There's always the odd occasion when a visiting football team from a less-local town would attract hoards - our whole town would make common-cause against the "outsiders" to "give them a good welcoming".

Any constellation with more than two factions fighting for the same territory is unstable.

When there are three or more factions of comparable strength, then that stalemate can be broken by two of them banding together. Two allied factions would be a lot more powerful than the other(s) and could then eliminate the other faction(s) one after another until only them remain. They would then either stay allied and there won't be a conflict anymore, or they are going to then break their alliance and end up fighting each other.

So when you want an ongoing conflict, then it is very hard to justify how there are more than two factions which all fight each other and all survive for any notable period of time.

One option would be to have two alliances of factions which are of about equal strength, but each of them consisting of a number of sub-factions which have conflicts of their own with each other. Now you actually have a very interesting situation from a storytelling point of view: The sub-factions in each one of the major factions are rivals and threats to each other, but the other alliance is an even larger threat. So they have to thread a thin line of fighting against their internal enemies but without weakening the overall alliance so that it would no longer be able to fend off an attack from the other alliance. A scenario for telling stories full of intrigue, subterfuge and backstabbing.

Another option to have more than two factions would be if there is one overarching sovereign ruling over all of them which uses a "divide and rule" strategy to keep the gangs in check. Like the city administration or a crime overlord ruling over all of the gangs. They know that they wouldn't be able to stay in charge if all the gangs would band together, so they actively keep them in perpetual conflict. Whenever one faction emerges with the potential to take over the others, they actively intervene and break it up.

You can justify why the town has a mysteriously large number of gang members, as other people have mentioned, if there is enough profit. If you invent something with profit margin of cocaine in your world, there is no reason why many gangs could not be there at one time.

Consider the situation in the Netflix series "Narcos" portraying the gangs of Mexico in the early 1990s. After the death of a kingpin, who has kept an unsteady peace between criminal cartels from different towns, riches have begun to accumulate in one town near the border in a city called Tijuana. Occasionally all the gangs have to meet in Tijuana for some social event, and pay tribute and taxes to the new cartel leader that controls that town, because without his approval they can't get their cocaine to a large market North of them, the United States. Of course, they are meanwhile plotting how they can come up with their own way through the border. This includes gangs from various towns. I suggest that your town is like Tijuana, maybe it is the bay town closest to some equivalent market, with the best access to something people are selling very successfully and very illegally.

The product could be anything: books of ancient demon summoning, dragon eggs, maps to sacred tombs etc.? Anyways it is making the crime bosses rich.

Here are the reasons why studying something like Tijuana could be interesting:

Not the answer you're looking for? Browse other questions tagged society crime criminal-underworld .

9
How would a drug cartel claim legitimacy as a government entity?
8
Geographically, how large would a very populous city during the 16th century be?
3
Everyone can heal very quickly. How does this impact forensics and criminal investigations?
42
How can a criminal organization incentivize its employees to do better while keeping its ruthless image?
13
How to prevent criminal gangs from making/buying guns?
3
How can an urban street gang develop into a nationwide criminal organization?
6
How many gangs (criminal and non-criminal) can fit in a fictional crime-ridden New York City?
4
How can an armed group travel to and attack a rival group in another country?
12
How can this prison induce Stockholm syndrome?
5
Political Stability of this Federalized Feudal Realm