How can a vampire produce T cells at home?

Let's say that there's a vampire that consumes human blood for a regular re-infusion of T cells - both a convenient way to explain why they don't need massive amounts of it (you only need a few, and the vampire's body duplicates them - it just can't build its own) and why they can only feed off of humans (vampires are derived from humans, minus T cells, which they need to ingest).

However, feeding off of actual humans is hard due to the circumstances they're under (extreme distrust of vampires + rewards for outing them).

Is there a way that a vampire can produce T cells at home, assuming that they have the resources of the average Western member of the economic 1%?

It may be possible for the vampire to make a proper tissue culture lab at his estate. But unless he is personally an expert in this field willing to take substantial time on the task, he has to staff it with people who have a pretty good chance to guess his secret. More to the point, since he's actually going to consume and use these things, he can't just culture some random tumor T cell line. He needs T cells that are capable of rearrangement, or have rearranged in millions of different ways in a stable population, and most likely they need to be not self-reactive against his own antigens... the cost and the number of technicians keeps going up. Tasty technicians who would work equally well, and much more reliably, in the simpler culture system described in the other answer.

Oh, alright, there is a biological method to do the tissue culture: Make pigs with a humanized immune system. I tend to forget about this one because I keep thinking a porcine endogenous retrovirus or some other "etiologic agent" is going to foul up the marketplace unexpectedly. But for now, at least, the vampire could acquire a colony of very expensive pigs to use for his needs. I doubt they will keep him warm at night.

However, feeding off of actual humans is hard [citation needed].

Some people buy eggs from the grocery store, some other keep chicken in their garden and have fresh eggs every day.

You don't need to go hunting for a fresh meal every day if you can afford having about 30 humans at your service who, in exchange for a roof, food and some benefits, will let you feast on their neck once a month.

If you are part of the 1% you can surely afford this little status symbol. Instead of bragging about the bottles of Bordeaux from '68 in your cellar, you can impress your guests with a virgin from '95. 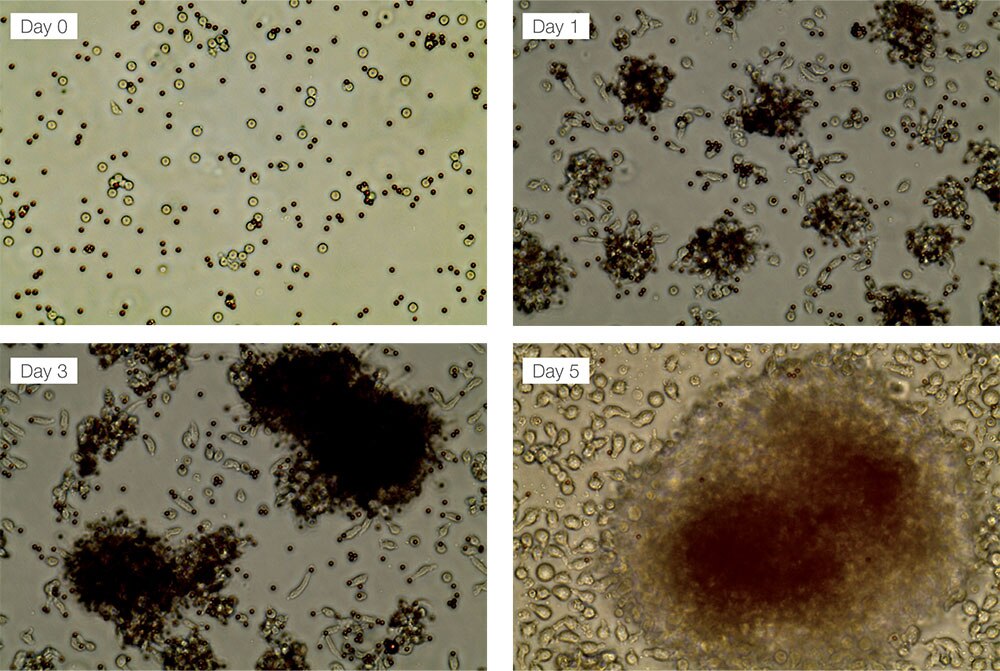 Here we describe methods for isolation of T cells from blood followed by activation and expansion using Invitrogen Dynabeads magnetic beads without the need for feeder cells or antigens..

Obtaining maximum viability is critical to the optimal performance of T cells in functional assays. It is important to be able to quickly assess the health of T cells using a small sample of cells. The Invitrogen Countess II FL Automated Cell Counter provides fast, accurate measurements of cell viability and concentration that can be performed both before and after isolation and activation, saving time and precious cells for future experiments. Additionally, the Invitrogen EVOS XL Core Imaging System can be used to monitor the expansion of T cells without disturbing the activation process or requiring extended time outside of the incubator.

People have been expanding T cells in vitro for decades. Sometimes you select for the ones you want using antigen and expand those. More recently the ability to expand engineered T cells is critical to CAR-T cancer therapy.

Step 4 is what your vamps are doing: expanding the T cells in vitro. Depicted T cells have been engineered to have little crosses on them. The vamps probably don't want those.

CAR-T is FDA approved now and people are doing it everywhere. If they have access to this tech the vamps can do it too, or use the apparatus at work and skim some for themselves. The idea of the vamps engineering some of the T cells for their own purposes would make very au courant scifi!

Not the answer you're looking for? Browse other questions tagged biology biochemistry vampires blood .

11
Cruelty Free Vampirism
1
Need help with details concerning non-conventional sci fi vampires
23
Where could a vampire get blood without harming people?
3
How do male vampire loses iron?
6
How Can Vampires Obtain Donors?
2
Hiding Vampires In Plain Sight
8
Ratio of humans to vampires for societal balance
3
How does one evade a highly determined vampire-sasquatch in an abandoned city?
12
Would a somewhat benign "vampiric" virus be doomed to infect everyone?