What's the best design for a receiving end of a Plasma Sail/Catch.

That is, (ignoring the specific means of how for now), a broadcaster in solar system x sends out a soup of macro-scale particles at a non-negligible speed(a fraction of C), of nonpolarized(my bad. I do want the beam to be coherent after all) "dust" at spaceship x. The magnetic catch's job is to first, allow the dust to(assuming some basic design) hit the catch itself and so transfer the magnetic dust's momentum, or by catching its momentum by some other means and so transfer it to x. The primary goal of this is to accelerate said ship up to 0.5 C.

So, What would the best design for such a catch be for the said dust, assuming a few things

-The dust remains something of a coherent beam, it expands, but not to the point at which it would be impractical.

-Room temperature superconductors are present, and are available for such a construct, though lacking in material strength.

-A Shadow shied/Whipple shield/just high-speed space dust shield is preset at the bow(If you want it) of the Ship and covers a large enough cross-section for the plasma catch to not be torn apart by high-velocity space dust.

-You don't have to worry about resources regards the construction of the catch.

P.S. It was late at night when I initially wrote, and I'm still mildly exhausted, so please don't get mad at me if I do or say something stupid(Such as putting on the wrong tag).

So, you've tagged this one [hard science] which makes it rather hard to answer... especially given definitions like "soup of charged particles at a non-negligible speed(a fraction of C), of polarized(nonpolarized, my bad. I do want the beam to be coherent after all) magnetic dust". I'll spare you a joke about coherency, at least.

The dust remains something of a coherent beam, it expands, but not to the point at which it would be impractical.

Discussions of focussing a beam of pretty much anything onto a plausibly sized starship over interstellar differences are a bit outside of the scope of this question, but you'd do well to consider that "magnetic dust" sounds suspiciously like handwavery to me.

You'd do well to read up on the subject. There's a paper that's well worth reading: Mass beam propulsion: an overview which looks at this specific problem and mentions a few possible solutions. Magnetic dust doesn't appear in any of them, FWIW, but maybe you have a more recent source for that sort of thing?

The primary goal of this is to accelerate said ship up to 0.5 C.

This makes things straightforward, though not simple. There's too much energy in any particle travelling at that speed to try and soak it up by letting it collide with the spacecraft. You've got to deflect it some other way, and the usual approach is to use a big magnetic field.

The incoming mass stream is generally assumed to be reduced to ionised gas by some means... self destruction for larger projectiles, collision with a much smaller mass of gas or ionisation via lasers for smaller projectiles. The dust being merely magnetic probably isn't going to cut it here, but this is drifting outside of the scope of the question so I won't go into further detail.

From the Nordley and Crowl paper, here's a diagram of a "dual loop" magnetic reflector: 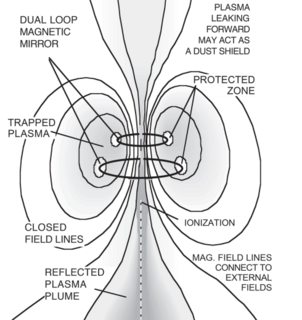 Note two important things: a stream of plasma shooting forwards through the reflector, and the obvious stream shooting backwards. This has some implications:

There's a further issue here, which is that large and powerful magnetic fields in space induce drag on the spacecraft by interacting with the interstellar medium. This is what ultimately killed the Bussard Ramjet, but does give us the possibility of using a magsail as a sort of interstellar parachute for breaking from relativistic speeds.

To ensure drag forces do not exceed thrust, Kare proposed an larger additional coil with an opposite dipole to to the main thrust-generating reflector coil(s):

and from the main paper

This cancellation loop could have ten times or more the radius of the reflector coils and a much lower current. He doesn't supply a nice diagram of this, but did offer this excellent example of powerpoint art in the presentation that went with the paper linked above:

The diagram is not to scale. The payload here is a point shown in blue, but given that it is at the bullseye of the target it probably isn't recommended for mass-stream driven spacecraft, rather than merely solar wind-driven ones. Note that the payload and cancellation coil are dragged behind the main drive/reflector coil.

To summarise then, and to paraphrase Elijah: the appearance and work of your spacecraft will be as a donut within a donut, possibly within a donut. A very large screening coil to reduce magnetic drag on the interstellar medium whilst the reflectors are operating, and one or two much smaller but higher-current coils making up the reflector. The payload will be distributed around the drive coils, allowing stray propulsion matter to shoot through the middle without needing to be armoured against. The drive coils will still need cooling and shielding, and the payload may need shielding inside a superconducting shell whilst the reflector is operating, depending on whether or not it is something that is unduly affected by strong magnetic fields.

Not the answer you're looking for? Browse other questions tagged science-based spaceships engineering interstellar-travel .

8
Attenuation of a laser in space?
7
Can a magnetic shield be effective for interstellar ships?
4
A bit more effective force field
9
(Somewhat) Realistic force field
9
Ways to detect lasers from afar
3
How wide would a Whipple shield on spacecraft traveling at near-luminal speeds need to be?
6
Stellaser Part I: Trial by stellar Fire or The best design out of three for a solar powered 5 Petawatt laser?
12
Casaba Howitzer vs. Magnetic Shelds: Plausible Counter?
9
Destroying Hypervelocity Rounds With More Hypervelocity Rounds