Is it possible to achieve space flight without having discovered crude oil?

Is it theoretically possible for a civilization to get into space without the capability of distilling crude?
I know that the Saturn V rocket was fueled with hydrogen from the splitting of hydrocarbons and that the logistics to build a spacecraft without the internal combustion engine (in the trains and cars transporting components) would be a nightmare, but is it possible?
Assuming that most other technology existed.
Non-human

Distillation is one of the most basic chemical refining techniques, is rather intuitive, and no one would make anything without it, including whiskey. Therefore I'll assume you mean access to crude in general.

The earliest widely used liquid fueled rocket was the v2 or Aggregat 4 rocket used by the Germans in WW2. It was fueled with ethenol, which doesn't need any crude to produce. For a matter of fact, von Braun had plans for building an orbital rocket based on it, read more here: https://en.m.wikipedia.org/wiki/Aggregat

Development would take longer because of the far lower specific impulse, meaning nothing really meaningful would be done in liquid rockets without hydrogen or methane engines, which are very difficult.

Another route would be to go all solid motors, but without many of the refined hydrocarbon polymers used in the common solid motors today, this may be difficult.

The principles or rocketry were discovered way before oil: once you have black powder it's relatively easy to use it for propelling a rocket-like object. And it was actually discovered by the Chinese together with the black powder. 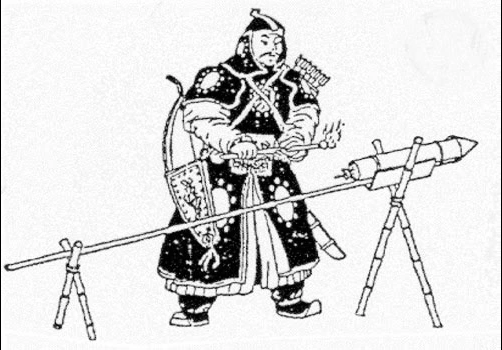 It then takes a dedicated effort to try pushing those fire spears higher and higher, and with enough creativity one can start propelling a vehicle using "weapons".

At least Randall Munroe did the math and showed that using a lot of AK-47 one can achieve a thrust to weight ratio above 2. Even better, by using the Gryazev-Shipunov GSh-6-30 one could get 40 gee of acceleration.

If I mounted a GAU-8 on my car, put the car in neutral, and started firing backward from a standstill, I would be breaking the interstate speed limit in less than three seconds.

Therefore rocketry can be developed without oil, at least in principle.

Addressing your claim that "the logistics to build a spacecraft without the internal combustion engine (in the trains and cars transporting components) would be a nightmare", consider that

For the rockets themselves, you can produce hydrogen by electrolysis, among other ways that don't depend on fossil fuel sources. Methane (as proposed by SpaceX) is easily obtained from biologial sources, while ethanol & biodiesel should also work.

So yes, it's perfectly possible to achieve current levels of space flight tech without fossil fuels.

chemically speaking all rocket propellants can be made synthetically form various sources on the surface of the earth. oil or any other fossil fuel is just the easiest source for our civilisation. that being said, you will have an efficiency problem if fossil fuels are not accessible. to develop rockets you need a lot of time from a lot of "unproductive" citizens. your economy needs to be big enough to be able to handle so meny "freeloaders". i mean those rocket engineers don't/hardly provide any benefit for the rest of the people. at least not until those rockets go up successfully.

One of the big variables is the gravity on the world you're working with. If it is earth sized, probably, but if the world is bigger than earth probably not.

Crude oil as rocket fuel - aka, highly refined kerosene, or RP-1 (rocket propellant 1) has been a notable propellant, with many rockets like the Falcon 9 using it today. However a whole swath of other fuels has been used. Alcohol, hypergolics (chemicals that will ignite upon contact with each other) and of course, solid fuels.

I am sure that lack of oil would make things difficult early on - but not impossible at all. As long as your world has the ability to obtain other chemicals and stuff like natural gas, you'll be able to get into space just fine.

Lack of crude oil, I think, wouldn't preclude the use of things like liquid hydrogen as a propellant, as long as your world can manufacture it.

Natural gas is a notable option, as methane is on the rise as a preferred propellant. SpaceX's raptor uses it, as does Blue Origin's BE-4, and more engines on top of those. In some ways methane is much better than RP-1, burning more cleanly and giving more life to the engine, which is important if you're aiming for reusable rockets.

Furthermore, both hydrolox and methalox engines have the potential to dominate future spaceflight, as they can be produced in situ (ie, on site). The Moon has been shown to have much water ice, and that can be manufactured into hydrogen and oxygen. Same on Mars, which has water ice, and the elements needed to produce methane.

All of this depends on what kind of difficulties caused a lack of crude oil - whether there is none, or they didn't have the means to refine it. If it is the latter, then getting off world will be rather difficult, as all these fuels require robust chemical extraction and refining infrastructure.

If they are more advanced then modern day earth on other fields they can use an electromagnetic launch loop or an orbital ring and get to space without needing a single drop of any "fuel" source, the link provided shows a good deal of ways to get to space (in theory) that requires no fuel.

Not the answer you're looking for? Browse other questions tagged technology .

22
Could a civilization achieve spaceflight without inventing advanced weaponry along the way?
3
Internet without space
5
How hard is it to build a generator if you've jumped to the distant past?
6
How do you achieve the agricultural revolution without agriculture?
1
Hypothetically or Theorethically can ancient to medieval periods technology make non biodegradable plastic bag?
5
Bootstrapping first metals and electricity without help of "easy" fire
9
Is my space combat system realistic?