Alright, so after deciding mermaids would be an all-female species, I realized I had to put some work into reworking Sirens. Originally, the Greeks conceived of half-woman, half-bird creatures they called Sirens. The modern-day depiction is more of a mermaid (or perhaps some sort of man-eating creature) with some sort of manipulative power, either magic or scientic, that allows it to lure and entrance prey.

My version of a Siren is a mermaid with wings, who use their enchanting singing voice to influence the emotions of their listeners. (Considering how powerful IRL music can be, I don't believe hypnosis-like effects are that much of a stretch, so...) My question is, how would a flying subspecies of mermaids develop?

This would require, as far as I can tell:

I would prefer for these Sirens to retain arms (or at least have appendages capable of making and using tools) if at all possible; having an intelligent species without arms is a big no-no for me. I say this because those species that have wings (birds and bats, not counting bugs) really have modified arms; they lost their arms in the process of gaining flight.

So, in sum, the answerer must address:

Alright, so basically, and this is a bit of a stretch mind you, their legs could become their wings. You need not follow what I put down here to the letter, but it is how I would have them develop.

First you need semi aquatic humans. Easy enough, a tribe of humans who never developed boats or fishing poles but had a high oceanic diet, along with a reverence of fish in a religious sense or something that made mutations that were fish-like sexually attractive, that eventually led to their bodies gaining webbed hands and feet and something of a tail to aid in swimming.

Then you need them to follow the path of normal mermaids for a bit, making their tail their primary mode of locomotion as it thickens and becomes a larger part of their body. The trick here is that they still need to go on land throughout their lives and do stuff, so they keep their legs despite their mainly aquatic lifestyle. Their bones would become lighter to accommodate their probably weaker legs at this point.

Then you need them to revere bats as well. This would tie in nicely with an inspiration for their sonic abilities, but this is mainly for their legs to develop into wings. For some reason it is their legs that gained elongated toes and more powerful muscles instead of their arms that lead to larger webbed toes and more powerful legs. Initially this may have helped a little bit with swimming, but due to their bat reverence they tried to use these limbs to attempt flight. Initially this only helped to mitigate fall damage, which was a plus but they were never satisfied with simply surviving falls. The generations pass with larger leg wings becoming a sexually favorable trait, and their wing legs become larger and more powerful, eventually allowing them to glide.

We all know how powerful leg muscles are, along with your gluteus maximus, and while they may have atrophied a little bit during their evolution due to their mostly aquatic lifestyle, their resurgence in their use for gliding has allowed them to regain their strength while keeping the admittedly large mermaid tail for swimming purposes. Their leg wings, due to being membranous, allow bursts of speed underwater in a similar matter to how frogs swim, and can also extend the length of a glide by imitating the movements in the air like a flap of sorts. These leg wings should be more or less central to the body's center of mass due to the large fish-like tail providing a counter-weight to the humanoid upper body, and as such would be great candidates for powered flight as is their goal from the bat reverence. Your sirens will develop godly ab, neck, and back muscles with repeated instances of them air-planking, because how else will they keep their bodies straight during their glide? The tail muscles are already strong enough to keep the body straight due to its primary use being in swimming.

Eventually the leg wings become powerful enough that each flap has them gain height instead of simply extending a glide, and so they gain the ability of powered flight just like a bat while retaining arms and a mermaid tail. Things may shift a little bit into their tails during their evolution as far as organs go, and so they may have a bit of extra space for larger lungs. 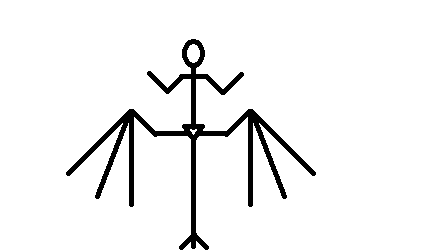 First of all, crows and ravens are notorious examples of animals capable of creating and manipulating tools while being able to fly. Your mermaids can be the same.

For the ability to fly, it can all start with some mermaid's ancestor developing the ability to glide outside of the water as a mean of escaping their predator, more or less like flying fishes do.

From there they can keep progressing on longer and longer glides by improving their flight ability, until it's no longer gliding but actually flying. If albatross can cross the oceans soaring on winds, why won't your mermaid do the same?

Don't forget however that developing wings will affect how good they can move underwater as compared to their unwinged cousins.

Not the answer you're looking for? Browse other questions tagged biology mythical-creatures low-fantasy .