How much sand is required to create a fluffy barrier?

I've got my stone mages who can manipulate earth (let's define earth as silicon dioxide). They can form protective barriers, raise platforms for them to stand on, or lift entire boulders to lob at those who look at them funny. Now they do not conjure up earth out of nothing - they have to pull it up from the ground.

Some more details regarding the manipulation:

That being said, simply lifting up soil vertically is not going to create a lasting barrier because there's a void below it, where the barrier was. It would fall right back down. So, my solution is that the earth they manipulate becomes "fluffy". There's a lot of air inside the barrier and in the sub-surface ground holding it up.

According to Banach and Tarski, this can be done without difference in properties. But we are dealing with discrete particles: the grains of sand making up the dirt being used. So this becomes a stacking problem. Using the fewest grains possible, construct a wall with sufficient compressive strength to hold a person and stop a projectile. Using too much earth would make the ground around one's magic activities too fluffy! Then we could have our fighters end up sinking in quicksand.

The strength requirement for the fluffy barrier is a value judgement, so I looked around for materials that are about as sturdy as what I imagine the barrier requires at a minimum. I landed on water ice; which according to Wikipedia has a compressive strength of 3 megapascals. That compares to 60 for sandstone and 7 for light bricks. Ice is also a fun comparison value given the broader context of the setting, which I'm afraid may not be mentioned by name.

So the question becomes; assuming a typical mound of earth to source from, and the magical manipulation of each individual grain (but no strength holding it up after the deed is done). How much earth, in weight, is required for a given volume of fluffy earth barrier to be as strong as water ice? In other words, what is the density of this barrier?

I understand if nobody has ever stacked grains of sand in perfect configurations and a lot of the knowledge is unknown. But I would still really appreciate an order-of-magnitude approximation, if it can be provided, so that I know whether my stone mages would need to worry about creating quicksand below their footing during an extended fight scene.

One other strategy, thanks to the contributions of AdrianColomitchi and PcMan in the comments, is to take as much soil as necessary from the ground (becoming fluffy in the process), and compress that into hard rock for your barrier. Again, only sedimentary rock is possible here. 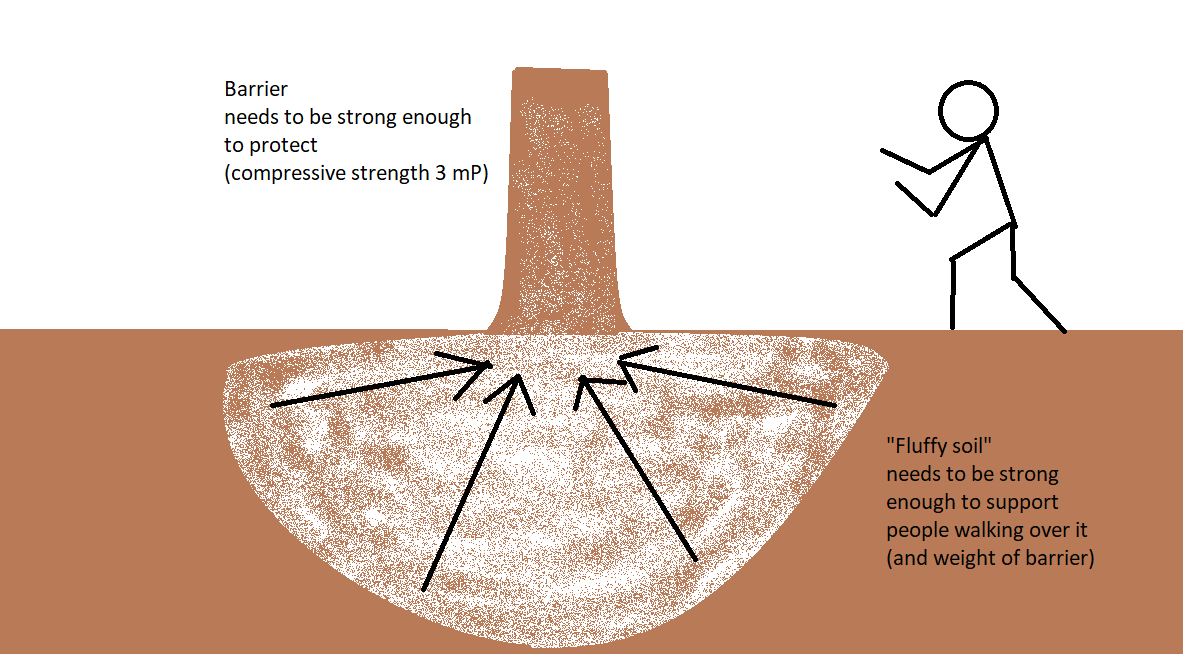 So for the second version, one needs to know the ratio of the densities of the barrier and of (standard soil minus fluffy soil = removed earth) to get the picture of how much sand is required for a barrier.

Unfortunately, I don't think physics is going to support either idea as stated. Sand, dirt, and other similar substances are "granular materials" and all of their strength comes from the friction of particles rubbing against each other.

In order for sand to have any strength at all the particles must be in tight contact with all the other particles around them. In your fluffy sand concept, you are purposefully separating the particles to fill a larger volume than normal, which means the particles are not compacted, and will have virtually zero strength. This is in fact the exact mechanism behind soil liquefaction- water makes its way in between sand particles, and if the water pressure is too great then the water pushes particles away from each other (or, reduces the friction force between particles) allowing them to slide freely. The result is a near total loss of strength.

You don't need water for this to happen. Anything that disrupts the friction between particles will weaken the sand- compressed air for example, or in your case, magic.

Rather than fluffy sand, what you need to happen is for the magician to convert the granular material into a non-granular material, such as fusing the sand into glass. Even then, care would have to be taken to fuse the glass into a structure capable of bearing weight, because sand is not light and glass is not strong.

The second problem is with the vertical barrier you propose. Again, sand is a granular material, so the only strength it has is from the friction between particles. There is no force that confines granular materials, so they naturally slump down into a cone-shaped pile. The specific shape and strength of this pile is defined by the angle of repose.

If you pull sand up into a barrier, you have to have some kind of confining force to keep it there. Either your magician has to concentrate and continuously exert some effort to keep the barrier, or they have to provide the barrier some internal structure with a non-granular material. Again, for example, they could fuse sand into glass.

This is actually easier than you might expect, though I have no idea if it will meet your 3 MPa strength requirement. Mechanically stabilized earth is just a granular material that has added layers to stiffen the earth, and you can build relatively strong vertical columns, at least to some height. Your magician would have to make horizontal sheets of glass interspersed through the column in order to make it load bearing.

However, the problem with this approach is that the main component of your barrier is still just sand. And again, as a granular material, the strength of sand comes from the frictional force between particles. Mechanically stabilized earth is very strong when you put a weight directly on top of it, because that compresses the sand and increases the friction between particles. A blow to the side of such a column is going to locally compress the sand where it was struck, but on the other side of the column it will put the sand in tension, reducing strength, spalling out some material, and reducing the overall strength with each substantial blow.

Not the answer you're looking for? Browse other questions tagged science-based magic physics materials .

11
Is life required for a world to be habitable for humans?
142
How do Glass Ants create their tunnels?
4
Could plants absorb ice dust from the soil?
5
Can a "dune" worm actually swim in sand?
4
How big of a fire do I need to create a hurricane?
14
What kind of planet could have giant sand worms?
4
Explaining Electricity Manipulation as an extension of Air Magic
5
Gaining a Better Understanding on how Sand Powers Work
12
What biomaterials with higher compressive strength than bone can I use to make big but proportionate humanoids?