Can a nonhuman species maintain an empire in a mostly human world? [closed]

Ask Question
Asked 3 months ago
Active 2 months ago
Viewed 135 times
6
$\begingroup$
Closed. This question is opinion-based. It is not currently accepting answers.

In my fantasy world based on late antiquity/the early medieval era orcs have a large, powerful empire and seek to expand its borders to invade more land. Since most of the world's population is human most of their conflicts are with humans.

What methods could orcs use to succesfully maintain an empire where the majority of the subject population is human? The goal is to prevent large-scale of just too many rebellions and make it so most humans would accept orcish rule. Real historical empires like the roman empire succeeded by assimilating people they've conquered into roman culture, and I'm not sure if it would be possible for orcs who look physically quite different from humans. Due to being a different species humans might have a harder time accepting orcs as legitimate rulers and be more likely to rebel. What could the orcs do to gain support from their human subjects?

Empire building will be much slower in the traditional way.

The normal way that an empire is conquered is you militarily defeat the main force of a region, and then your nobles intermarry with their nobles so you can be a legitimate leader.

This lets you call upon the resources of those you conquer, in taxes and levies of soldiers.

If you can't intermarry with conquered people because you can't breed with them, it's gonna be much harder forming bonds.

They can form an empire like the Mongols did.

They had people of their own race form the core of governments, but a lot of their advances were based off making people pay protection money. They would go to cities, demand payment, and refused use horse archers, chinese siege weapon builders, and lanced charges to slay their foes.

They also built a sophisticated messaging system and trade system to communicate across their empire.

This lets you leave the governments of those under you mostly intact, while getting tribute and mercenaries from them as needed. 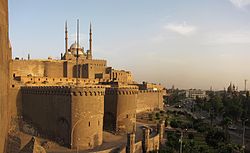 Depicted: the Cairo citadel and mamluk stronghold. The mamluks were non-Arab warrior slaves in the medieval Islamic world. Despite technically being slaves, they were politically powerful in many Islamic countries. Mamluks took control and ruled Egypt for centuries.

Under the Mamluk Sultanate of Cairo, Mamluks were purchased while still young males. They were raised in the barracks of the Citadel of Cairo. Because of their isolated social status (no social ties or political affiliations) and their austere military training, they were trusted to be loyal to their rulers.[21] When their training was completed, they were discharged, but remained attached to the patron who had purchased them...

Mamluks lived within their garrisons and mainly spent their time with each other...

Sultans owned the largest number of mamluks, but lesser amirs also owned their own troops. Many Mamluks were appointed or promoted to high positions throughout the empire, including army command.[18] At first their status was non-hereditary. Sons of Mamluks were prevented from following their father's role in life. However, over time, in places such as Egypt, the Mamluk forces became linked to existing power structures and gained significant amounts of influence on those powers.[18]

In Egypt, studies have shown that mamluks from Georgia retained their native language, were aware of the politics of the Caucasus region, and received frequent visits from their parents or other relatives.

So: ethnically distinct from the majority population, living with each other and not with the locals, children produced with the locals are not themselves mamluks. No inherited power. Only fresh-caught and trained persons can be mamluks. You could have your orcs be like the mamluks - ruling the humans but sticking to their citadel and consorting with their own kind.

I am hoping AlexP wades in on this one because the mamluks are super interesting.

How many species of intelligent beings are there on Earth at the present time?

The usual answer is that there is one one species on Earth the present time, Homo sapiens, which is recognized as being an intelligent species. Since that recognizing is done by members of the species Homo sapiens, one might suspect that they might be biased in their favor.

So if some of the other large brained mammal species on Earth seem to have intelligence ranges which overlap with those of humans, does that mean that they count as intelligent beings and as people?

So it is possible that members of at least four species of great apes, three species of elephants, and up to 80 or 90 species of cetaceans might be intelligent beings and people.

Thus it is possible that while humans formed thousands and thousnds of different states, some of which can be considered to be empires by various definitions of empire, other intelligent beings also lived on the Earth, and had greater or less degrees of interaction with human empires, and greater or lesser effects on the ability of humans to form and maintain empires.

And from those examples it looks like there might be only one species at a time with the ability to form empires. But what if two intelligent species on a planet are equal in the attributes which enable empire forming?

If there is a species on a fictional planet with similar intelligence and manual desterity to humans, they should be able to found states, including empires, about as well as humans can. In a world where humans are also found, sometimes those beings might rule empires which include humans as subjects, sometimes humans might rule empires that include those nonhumans as subjects, and sometimes there might be empire where the ruling class includes humans and nonhumans, and the commoners include humans and non humans.

The works of Tolkien contain several examples of superior species having rule over inferior species.

In Aman the Blessed the Ainur rule and the Elves rule themelves subordinate to the over all authority of the the leaders of the Ainur.

In Morgoth's realms of Utumno and Angband Morgoth's main servants, fellow ainur, were the uppermost class and members of biological species were lower cloasses, down to enslaved enemies who were the lowest classes.

And in the Years of the Sun in the later part of the First Age, Eleves ruled in Beleriand. There was a certain rivalry bebtween Thingal and Fingolfin as to who was the righful overlord of all Beleriand.

And after several hundred years of the Sun Men appeared in Beleriand. The Men settled in various lands and their lords became allies, clients, or vassals of the Elven kings.

So the Elves in Beleriand came to include lowly humans in their realm.

I am not certain how "superior" to humans any type of orcs might be. But I guess that your orcs could be equal to humans in ability to organize their societies and their armies, so they should have a fair degree of success in their wars and other relations with humans.

Physical differences is not a barrier to rulership. There are countless examples in our own world of history of empires where the ruling classes of a different race or ethnicity then thier subjects. Romans had Germans ( considered by them to be a different race) Asians and Africans in their Empire. The Spanish Empire Is had a ruling class of European or partly European ancestry, which ruled over a population of mainly natives and and African slaves. If fact there difference might strength there rule. If there could prove that they were physically stronger than humans they might be able to present themselves as demigods with a divine right to rule.

Not the answer you're looking for? Browse other questions tagged society medieval government .

5
A world without human relationships
8
How might an inter-planetary confederation turn into a highly centralized empire?
9
How fast can a society be 'upgraded'?
2
How can an independent region existing within an empire remain independent?
3
What Should the Size of These Secret Superhuman Organizations Be?