are my rivers and map little realistic

This is my first world map so I just need to know if said rivers are realistically flowing from point to point. And if you have other tips those would be helpful as well. Rivers flow from the mountains to the ocean. If you can't see the lines going across the map they are the rivers I couldn't get a better picture so this is all I have got. 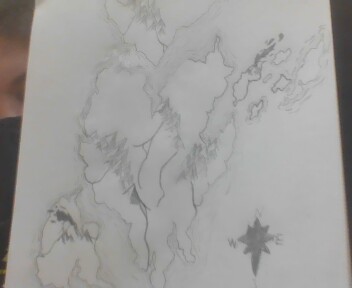 Rivers flow from high to low. They start as many small streams, flowing downhill, which gradually combine together into larger streams and then rivers, and then finally massive rivers that empty out into a large body of water. Look up "river basin" on Wikipedia, and find some river basin maps to see how this works:

You have to know the topography of a region in order to guess how the rivers will flow. Then, tracing the path of any given stream/river is easy: it follows the steepest downhill path until it hits another stream/river or lake/ocean. This path is generally perpendicular to the axis of the nearest hill/mountain range. For example, in the USA everything on the east of the Rocky Mountains stays east and eventually drains to the Mississippi River, and everything west of the Rocky Mountains stays west.

Ok, the Okavango delta. But usually rivers get to the ocean. You have some rivers midcontinent that just stop. One of them also has an unusual triangle. That does not look like a natural river.

Those two midcontinent ones would join together right by the pyramid. They would pour into the river that starts at the pyramid. That is why there is a pyramid there - the confluence of large rivers is a fine place to site a powerful city.

That pyramid river would enter the sea at the most inland extent of the sound. It would not enter at the side of the sound and leave the sound looking the way it does. 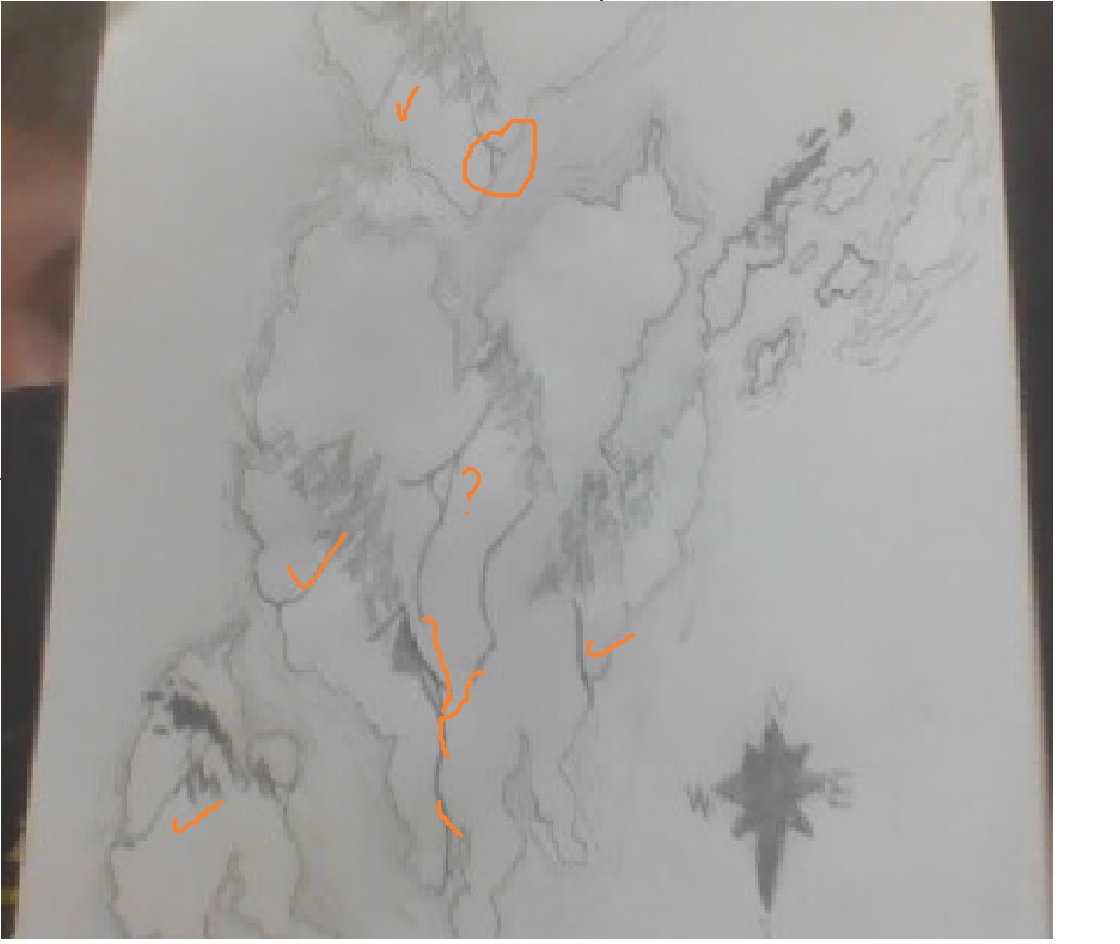 OK here is your map with my suggestions in red. ? is because I dont get the triangle. Check is rivers I liked. I circled a river in the northern island because it splits in two near the ocean. Some rivers do that right at the end because they ramify into a river delta with several arms. They are swampy places. Check out the rivers in Bangladesh. You have some deep sounds where the ocean comes way inland to a point. Usually there will be a river feeding into the point - I moved your one river to go into the ocean at the point of the nearby sound. Those other big sounds you have would probably have their own rivers. 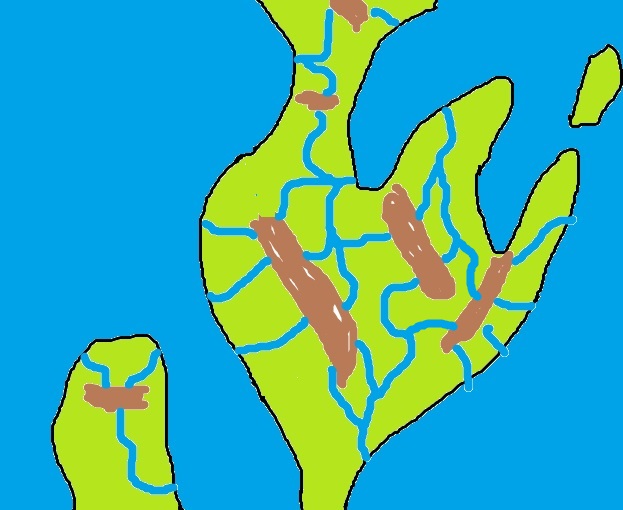 I made this crude picture to help you on your way. The basic idea is that all rivers flow from mountains/hills to the ocean. On their way to the ocean they often join but never split. If a river runs parallel to a coast then that indicates but not necessitates that the coast has a lot of cliffs. The amount of water and the number of significant rivers depends on the amount of rainfall. In the picture I made I just assumed equal rainfall all over. But that wouldn't happen in a real natural world.

Exceptions are possible but they are always rare, noteworthy, and have clear causes.

It is almost impossible for a river to split into two. The opposite can happen, with two rivers merging, but not the other way around.

The exception occurs in river deltas. Here, the water slows down, dumping suspended sediment into the river bed, raising the bed until the main channel "falls off" the shallower channel. This has happened repeatedly in the Mississippi River Delta, and in fact a great deal of effort and expense has been invested in preventing the Mississippi from switching over to the Atchafalaya on the delta.

So those "triangular" river networks need a lot of justification.

Not the answer you're looking for? Browse other questions tagged reality-check worldbuilding-process map-making rivers .

7
Default map projection
22
Is my world map unrealistic?
6
Could I get some guidance on this map in progress?
14
Rivers without rain
2
Does my climate map work?
20
Is my river map even remotely realistic?
10
How to create a realistic river without knowing the whole map beforehand?
3
Do rivers pass through a mountain range?