It is steampunk-themed so the technology I am going to use is steam based.

Let's start this at the beginning so you might understand.

At the beginning we have a mineral called Beatrice. When refined and ground into fine dust and mixed with water then heated to the boiling point, it creates an anti-gravity effect which I call the Beatrice Effect.

I want to be able to explain how this works to my readers in a very easy-to-understand way. One way to do that is to understand how anti-gravity works apart from making a 1,323,000 ton super carrier/assault carrier float mid air. How does it affect the ship and how can it have various applications in a magic-steampunk driven world?

How can an anti-gravity effect also be applied for carrier/land-borne aircrafts and as a weapon of (controlled) mass destruction?

Antigravitic MacGuffins are some of my favorites. And yours is the mother of all overpowered Antigravitic drives. We'll ignore the most obvious issues (if it cuts off gravity, it cuts off solar and galactic gravity as well and quickly diverges from the planet and the solar system) because airborne super-heavy battleships are just so much fun.

Now, the idea of a 1.3 million ton superfloating plaform is impressive, since over in 1945, after 6 years of ramping up war materiel production, the entire US economy had the capacity to produce about 80 million tons of steel per year, only a fraction of which would be of the thickness required for ship plating. But with a 1.2 million : 1 lift ratio, new miracles become possible. However (assuming for sanity's sake that the effect is limited for the most part to Earth's gravity or that engineering corrections are put in place to account for any deviations) that still leaves the issue of moving 1.3 million tons of stuff horizontally. By comparison, the superheavy battleship Yamato (74,000 tons) or US Supercarriers (100,000 tons) get to push against much denser water.

The lift is being provided by firing up (or cooling down) different numbers of these heated MacGuffin-Beatrice tanks, which can be placed behind thick, thick plating, making what we think of as anti-aircraft ground fire about as dangerous to them as fireflies. Since we're steampunk, there are no guided or nuclear rockets, so these are the ultimate 'tanks', in the sense that they don't care about terrain, can take a lot of heat, and can generally be taken out mostly by other 'tanks'

Horizontal movement, as alluded earlier, is slightly more problematic. I'm assuming you have no jet engines, so exposed propellers would make an obvious choice if trying to disable such behemoths. This will quickly persuade military aircraft builders to place the propellers at the top of the structure, relatively safe from direct ground fire, or, if possible, down well-protected (sealable?) shafts.

Now with the ultra-thick plating on all sides, it's starting to sound less and less like an aircraft carrier (since what can piddly little fighters do to 2 meters of armor plating), and more like a Yamato-style superbattleship. To get through thick armor and pierce through to those propellers and MacGuffin steamtanks, you need big guns. Really, really big guns. And range, so that their big guns don't get to hurt you. Guess what helps with range (also with hitting those exposed top-propellers)? Altitude. This will quickly become a game of who can go (and stay) highest for longest. Imagine a ship with a battery of a dozen Doras or Heavy Gustavs guns trading 7 ton shells at a range of 50km from 10km up in the sky with an enemy ship. 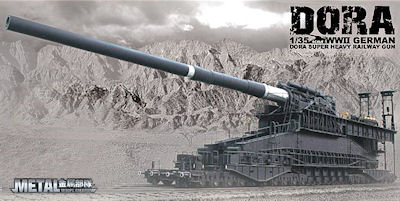 Your airmen will need to wear oxygen tanks during battle, pressure suits and very warm clothes or die instantly from asphyxiation. Obviously you can't maintain a 10 km unpressurized altitude for too long with a human crew, (and steampunk has no radars, right?) so sneaking up on a low-hanging (mere 2000m) ship through stormclouds or from sunblind spots will be a favored tactic. The ceiling on propeller craft seems to be around 17 km. Perhaps the first combatant to successfully pressurize their superheavy ships and develop jet or rocket engines could manage horizontal movement at altitudes of 20 km and wreak havoc on the fools below.

Not the answer you're looking for? Browse other questions tagged technology warfare weapons airships steampunk or ask your own question.

12
What are the consequences of using limited anti-gravity for steampunk-style airships?
24
How does a super-power salesman not get shut down for legal reasons?