What would be a realistic size for a werefox race?

If you have read Eragon, then you know of the Werecat: a race that can shapeshift between a 'large cat' and a 'child', almost certainly with no change in mass. The Magic System is based on the literal and the scientific, thus matter and material cannot be generated or removed without understanding how that could be possible.

I'd like to take this concept and evolve it into what might be considered a 'Kitsune'. Rather, let's say someone magically evolved a werecat into a reflection of a 'Kitsune'. A Werefox for convenience, but not necessarily a race that is part-fox, just somewhat mirrorsing the theme.

A mostly(or only) female race that could shift between a cat/fox-like animal with a long fluffy tail, a human with animal ear+tail features, and a human - but the mass has to be retained. Their evolution should require them to retain as small a figure as plausible, but be capable of safely 'mating with a human to produce children, which would need them to also have a pleasant appearance(if short?) to men in a medieval-type society. Probably closer to a physically attractive woman on a smaller scale in overall size rather than just being shorter? As a (probably unnecessary addendum) they would also prefer running (and probably walking) on their toes when in human form unless carrying significant weight(or would this be a lie?).

Specifics can be changed if it doesn't fit realistically, but this is the general outline. The only magical component to this is the intrinsic ability to shapeshift between working forms. As they would exist in a medieval-type society, the Humans there would typically be malnourished and generally shorter, and they might naturally reflect that if needed.

I'm mostly looking for general height and weight, but details are appreciated.

let's run the numbers. A quick google search shows that the average fox in the UK weighs 9 and 17 lbs. Then according to a child weight percentage chart (also provided by google), your fox in human form will probably be, at most, the size of a 8 month child, assuming mass is conserved. If you assume that all your fox/people weight as much as the upper bound of red foxes (30 lbs) then your fox folk can be as large as a 3 year old child, when in human form.

Or, and hear me out on this; unless your readers really like doing math and consulting statistical charts, you can just ignore conservation of mass altogether. You are already allowing for changing form, and you are saying that this is a fantasy race in a fantasy world. Skip the boring and science based limitations. Remember if your magic is sufficiently explained it ceases to be magic and becomes mundane technology. Magic is supposed to be the fantastic, by it's nature it breaks the rules of reality, don't ruin the fantasy and the wonder by binding it to what can be explained in our sciences.

For either of these, they are going to be disturbingly large in animal form and very short in human form.

While the other answers make clear the significant difficulties involved in conservation of mass one potential approach is to include other changes.

Achondroplasia is a genetic disorder whose primary feature is dwarfism.3 In those with the condition, the arms and legs are short, while the torso is typically of normal length.3 Those affected have an average adult height of 131 centimetres (4 ft 4 in) for males and 123 centimetres (4 ft) for females.

This chart puts the 10th percentile for 18 year old males at 25kg, and females at 35kg.

You can use this as a starting point, to get your human form weight down further. Significant sensitivity while writing a character like this would be required.

In the opposite direction for fox form, unbreakable bones have been observed in humans with up to 8 times the normal density, though I can't find any articles actually taking about the weight of the people involved or comparing that to others of their height and build.

Given how far apart the initial weight requirements are, you'd still need some handwavium (additional really heavy tails?) to make this work.

If they are goo-like shapeshifters, who only assume a form on the outside (not muscles or other biological material) that goo can just get denser or rarer as the form demands.

Setting aside the fact that transforming from a human into a fox is so wildly physically impossible that "conservation of mass" is the least of your problems, remember, they're not real foxes or real people. So neither body has to be exactly like those of the corresponding species, only enough so to be convincing from the outside.1

Otherwise, since you're already deeply altering the internal organ structure to make room for more brain tissue, alter the organs even more.

Let's start with the baseline of:

Let's start by making the fox male. We're transforming back and forth between species, so transforming gender shouldn't be a problem, and gets us to the size of a very large male fox. Now, we're at 15kg for the fox, without even doing anything too weird!

Next, let's change up the proportions a little.

Foxes are also deceptively light canids; thanks in part to their very slender leg bones, they weigh about 30% less than you’d expect for a dog of their size. (link)

We can actually do the rest with bone density.

At this point, by fiddling around with some of the numbers, we can come up with something to close that 1.5kg gap, or just blame it on the tail.

Or be cool as hell, and give your foxes steel bones. You're shapeshifting anyways, so why not?

Actual foxes weigh, at most (according to another answer), ~17kg (38lb). According to the CDC, that's roughly a 4½- to 5-year-old child, or ~110cm (43in). A more realistic "typical" number is probably 12kg (26lb), equivalent to a 2-year-old, ~90cm (35in). That's actually not entirely implausible for a meaningful character, but they're going to have a lot of difficulties interacting with "mundane" humans due to their perceived age.

Paolini's "large cats", equivalent to "children", might well have had animal forms closer to a Eurasian lynx. At ~20kg (44lb), such a cat would have a human form closer to that of a 6-year-old, about ~115cm (45in) tall. They would definitely seem like "children", but they'd have a much easier time than the toddler-sized shifter you get using a realistic mass for a fox.

That said... what constitutes a "fox"? If you're looking for something that looks the part, but is allowed to be larger in animal form (more like Paolini's werecats)... have you considered the maned wolf? 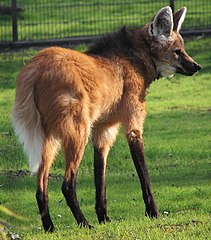 These beautiful animals look a lot like foxes, except in size, with an adult weight range of about 20-30kg (44-66lb). A human child of similar weight would be between 6 and 9 years old with a height range of about 115-135cm (45-53in). It wouldn't be too unbelievable to stretch that a bit and have your characters be roughly equivalent to children in their early (pre-pubescent) teens. (Except your females are going to be, ah, "fully developed". That's likely to make for some interesting reactions from "mundane" humans.) For that matter, you transplant the maned wolf's colors onto a Eurasian wolf, for which particularly large specimens can reach almost 80kg, which is easily within the realm of weight for a normal adult human male.

So, in short, if you want your fox-people to be fox-sized, they're going to have to be really small humans. If you're willing to let them be more wolf-sized, they can be much larger as humans while still looking like relatively "normal" animals.

Note that all numbers are taken from the mean curve; actual correspondence between age and weight/height can vary considerably, but since we're talking about adults that look like children, that variation isn't all that meaningful for our purposes. The weight/height correspondences are less variable.

Not the answer you're looking for? Browse other questions tagged xenobiology fantasy-races shapeshifters or ask your own question.

63
Is there a credible way a shapeshifter could gain/lose body mass when changing forms?
3
How heavy would a Naga be?
19
What sounds would be common for both forms for a human/wolf shapeshifter?
21
How to differentiate between different races of shape shifters?
5
Evolution of polymorphism
8
How can a team of shapeshifters communicate?
0
What difficulties might a 6ft shapeshifter have in impersonating someone 12in shorter?
4
Rail Transportation with Races Described Below - Specifically, Seating