What habitat is the most likely to be used in this location and state of development on Mars?

In my story, people have been on Mars for around 15 years in the mid to late 2040s. The base lies in Arcadia Planitia, where the atmosphere is slightly thicker, offering greater radiation protection. The base is a good number of people at this point (I have not pinned down the realistic number at this point), with astronauts from the US, JAXA, and the ESA.

Considering that this has mostly been spearheaded by NASA and SpaceX, in partnership with many smaller companies doing things like 3D printing, what would the habitats look like?

In my research I've found a wide variety of concepts, from 3D printed habitats: 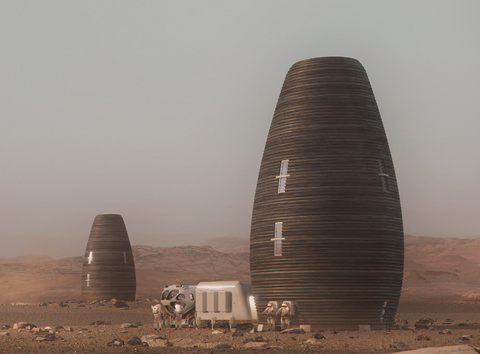 To pre built habitats landed on the surface:

To even early concepts for using Starship itself as the habitat for Lunar and Martian bases: 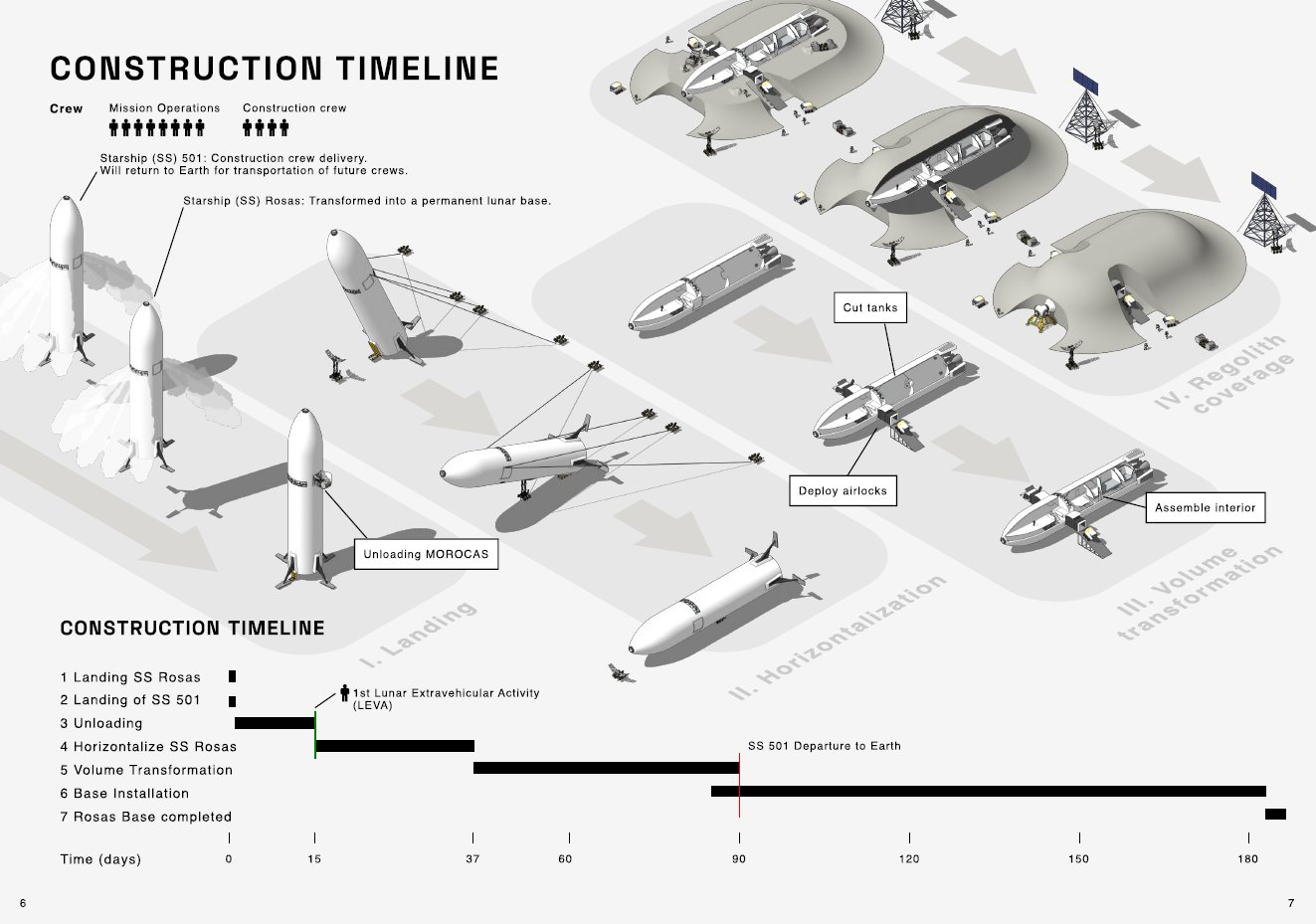 One of the big things that I've found confusing is whether or not Martian bases need a covering of soil to protect against radiation. Obviously there are other alternatives to stop the radiation, like making the whole outer layer of your base the water tanks - but I simply want to know which of all these designs is the most likely.

I feel somewhat sure that the answer will be - no one knows because we haven't tried to live on Mars yet - ie, I have reached the limit of research, where really its up to me to decide. I thought I would ask for feedback anyway.

Remember - this is the late 2040s, and people have been on Mars for a while now.

The base will not have been established for that long, there will have been considerable experimentation and also a desire to reuse as much as possible. So I would expect a variety of solutions not necessarily deployed in the most logical manner. Despite popular wishes and artwork I doubt any Starships will be laid out horizontally unless they are being scrapped for structural reasons.

I would think quite a few cargo Starships will have been left behind and might still be in use. Perhaps one has been half cannibalized and they are experimenting with using the parts. A few crewed Starships somehow connected together as part of the original bases, half a dozen pressurized modules supplied by ESA connected together with a couple of small domes one transparent with plants growing in it. Some non descript mounds one of which covers the main habitation module (some sort of large Bigelow structure. Perhaps a larger partly sunken building is under construction or partly completed. Everything is filthy with dust.

In the surrounding area a vast array of solar panels, a bulldozed bund to protect the settlement from blast effect (now less needed as the ships land further away on a purpose built landing pad). Half a dozen vehicles such as multi-purpose bulldozers, large pressurized rovers, a flatback and small crane for transferring cargo.

Other things – what looks like an oil refinery with lots of large tanks and equipment for ISRU generation of pure water, methalox, oxygen and nitrogen for breathing and some waste reprocessing. A fair amount of equipment and experiments yet to be started, under way or out of commission. Population one or two dozen, a few people have recently spent 2 synods on Mars.

How the architecture of this base would be is imho determined by the stage of the mission.

Let's put a picture first, where is this place on Mars.. 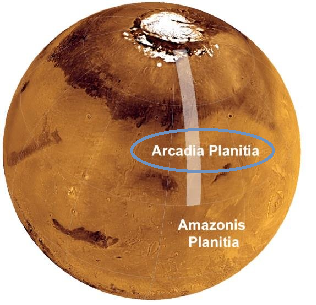 A good location for touristing, nice mountains, nice views.. but first things first! There's a lot of serious work to do before you can invite tourists in.

Because I see development as a main factor, my answer has a chronological order,

On the day of landing, when Youtube videos are taken for family and friends, the crew will shoot their selfies outside, in a space suit. "Look at me walking around on Mars". But after some time has past, and Earth television is about other topics, the crew will prefer to remain inside, where the lab is, and where food is consumed, where you sleep. When humans settle there, they'll primarily care about their small community, isolated from a hostile atmosphere. And being able to walk around in normal clothing.

The hard work, like harvesting water, maintaining greenhouse and energy facilities and terraformation experiments outside is done by robotic machines. Sometimes humans go outside to solve issues, transport machines, or help machines starting up. The base would look like your first solution, or the third one. A large, central building from within humans coordinate the mission and evaluate experiment outcome, laboratory investigations of objects, do logistics, etcetera.

In a later stage, maybe the second one..

The second drawing looks like a scenario you'll have separate buildings for sleeping and working. At first, this would be very impractical: the crew must regard "outside" as some kind of clean room, where you'd be required to wear a special suit. Every door is a million dollar project.

Airlocked gateways between the buildings could be a modification to make #2 workable.

You've placed your settlement in a mountanous area. There may be caves there, some could be sealed off. The advantage is the huge space available. Take some safety precautions though.. it must be possible to heat the place without cracks, and you can't have leaks.

Some factors would enable more outside activities. Suppose you have space suits of a new generation, where you can wear the suit inside without the helmet, or terraformation is already working (partially) and lighter space suits, or masks can be used when walking around. So further down the line, for the sake of aesthetics, privacy and scalability of your base, using normal Earth-type buildings may become feasable. This is a stage you could put hotels and tourists in.. and recreational expeditions.

It is simple and practical. Rolls of plastic sheet come from Earth. The ground is raked smooth. A lower layer is unrolled on the bottom. Inflation apparatus is put on it. The roof is placed on top and circumferentially fixed into the ground. Inflate.

There is your building. It is all you need. Wind is weak with the thin atmosphere as is conductive heat loss. Access points can be cut into the plastic for pipes, windows etc as desired. The plastic is easy to patch which will make for a good long term colony look. Note: patches will be on the inside where pressure will help hold them in place.

I was thinking about this scheme. If some low volatility grease or asphalt were put on the top of the dome it would be tacky and dust would adhere. The layer of dust in the grease would serve to block radiation and also protect the underlying plastic from sand abrasion.

The most important technical advance of the 21st century is the so-called "disintegration ray" - a computer-controlled array of acoustic emitters.

Using this methodology, the countries of Earth have been able to build underground vertical farms and conserve water for agriculture, endure extremes of heat and cold, preserve endangered species and ecosystems, enclose dangerous polluting industrial sites, and in recent years, escape the harmful effects of nuclear fallout. (The countries of Earth have also found some uses for it on one anothers' armies, as the definition of "substrate" is highly flexible)

With this technology already mature on Earth, the move to Mars was very straightforward. Apart from a handful of prefabricated shelters at leanding, shelters used underground shelters to escape the risk of harmful radiation and to lower the energy requirements for heating to what could be provided by their solar panels.

Not the answer you're looking for? Browse other questions tagged space-colonization mars radiation .

5
What is the most effective way to build road on Mars and Moon?
17
What weapons would likely be used in a Martian war?
1
What would be the likely cultural development of colonies after long periods of isolation from the motherland ?
11
Why would War Of The Worlds happen?
12
Feasibility of an 'Oxygen Radiation Zone': a non-pressurized natural formation on Mars that provides suitable atmosphere
5
What is the most practical/effective transportation method between colonies/settlements on Mars?
15
Why would the first manned Mars mission have a huge crew?
6
Where would be the most likely location for an early Mars base?
12
What would cut off a Mars base from Earth's support for an extended period of time?