Would a nuclear fission thruster with continuous fuel injection be possible?

Assume that Uranium is vastly available, as are the building materials. Can you build this device?

The fuel tank stores uranium at a high temperature so that it remains liquid. The fuel injector/s spray a continuous stream of molten uranium into the nuclear fission chamber. The fission chamber sustains a continuous fission reaction. The pressure is vented out of a thruster like a regular rocket engine.

This could be used to propel rockets or spaceships or whatever.

Some problems I'm thinking of already:

I was also thinking that instead of sustaining a continuous reaction, you could just continuously provide the conditions to begin a new reaction. (a nuclear fission pilot flame if you will.)

Could a nuclear fission rocket engine ever work?

Do you think it could work better than rocket fuel?

There is a concept similar to this called a Nuclear Salt Water Rocket (NSWR) that was proposed by an SF writer who is also a physicist.

The fuel is a 2% solution of 20% enriched Uranium Tetrabromide in water. A Plutonium salt can also be used.

The fuel tanks are a bundle of pipes coated with a layer of boron carbide neutron damper. The damper prevents a chain reaction. The fuel is injected into a long cylindrical plenum pipe of large diameter, which terminates in a rocket nozzle. Free of the neutron damper, a critical mass of uranium soon develops. The energy release vaporizes the water, and the blast of steam carries the still reacting uranium out the nozzle.

It is basically a continuously detonating Orion type drive with water as propellant. Although Zubrin puts it like this:

Also, just to be clear this is a concept that could work in theory but working out the engineering details will be incredibly difficult (and other scientists do not think it will ever be practical). 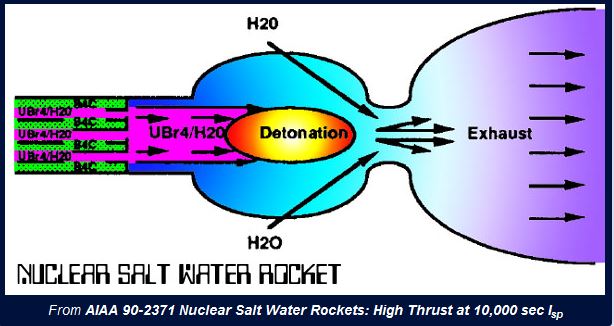 Far more information available at the link provided above.

That'll work, but it's inefficient: much of the energy generated gets radiated away as gamma radiation or other high-energy photons, while the need to keep the reaction chamber from overheating limits how fast you can use the fuel.

A closely related concept you might be interested in the nuclear salt-water rocket: instead of injecting liquid uranium, it uses uranium salts dissolved in water.

Various nuclear systems exist, but perhaps the closest to what you are describing is the dusty fission fragment engine.

Uranium or Plutonium diet is injected into the reaction chamber and held by a combination of electrical and magnetic fields. When enough dust is present, criticality is reached and the dust becomes a mass of plasma, with fission fragments flying out at speeds up to 3% of c Using the magnetic and electric fields to guide the reaction products out of the chamber and through a rocket nozzle provides thrust, although internal collisions and interaction with the fields reduces the exhaust velocity to a "mere" 1% of c.

This is a low thrust, high ISP engine, but calculations suggest that using this device could propel a spacecraft to Jupiter in 6 years (accelerating and decelerating so you are captured in Jovian orbit. Energy could also be captured to run ship systems, either through capturing some of the waste heat of the engine to run turbines, or by slowing the exhaust stream further by allowing it to pass through an MHD generator (which is much lighter than turbines and is also highly efficient in converting the energy into electrical power).

So long as fissionable "dust" is being injected into the core, the reactor will continue to provide thrust and power to the ship.

8
Could you create a travelling planet?

8
Economic feasibility of RTGs for base power
35
Which fast STL drive could not be weaponized or results in perpetual motion?
7
Small-scale aviation without fossil fuels
8
Feasability of plasma based garbage recycling into pure constituent elements
8
Effects and feasability of a modern-day Olympus and Hephestus
8
Repulsive magical engine
2
Enhanced Nuclear Fission Weapons: Casaba Howitzers VS Nuclear-Pumped Laser
13
Could an Earth-like world use airships as heavy cargo haulers?