Could an advanced species, having evolved on a large planet with a deep gravity well, be helped out of it from above?

Suppose an intelligent species evolved on a large rocky planet, one with sufficient mass that the species had little hope of developing anything anytime soon that could achieve escape velocity. They're stuck in a deep gravity well. Whereas we've been able to use rockets to exceed Earth's escape velocity and achieve orbit and beyond, the best efforts of this poor species would never even get close. Whatever space program they might try to develop ends in frustration and despair. They don't even have satellites.

If another interstellar species found them, miserably stewing down on their world's surface, would there be anything in hard-to-medium sci-fi physics that could be done for them that they couldn't do for themselves? They could send ships down, but they'd never make the climb back up. Could a space elevator be constructed in orbit by the spacefaring species and fed down, like throwing a rope down a well? Or something else? I'm deliberately excluding things like teleporters, for obvious reasons...

The big problem is that an Earth sized planet is at about the limit of theoretically possible materials for a space elevator, tether or rotovator. More massive worlds will need materials which are even stronger than graphine, fullerine tubes and so on.

The only practical means of getting from planet would be to give them the plans for the most efficient externally powered rockets possible. If that is not enough, then also give them the plans for an MHD accelerator, so the energy from an orbital laser or microwave station will energize the exterior of the spacecraft and with a combination of electrical and magnetic fields generated from the body of the spacecraft, air can be forced to accelerate around the spacecraft, providing acceleration in the lower part of the atmosphere.

The laser or microwave energy can also be focused below the spacecraft and used to heat the air to plasma temperature, providing thrust and reducing the amount of reaction mass that you need to take aboard.

These techniques were investigated by Like Myrabo in the 1980's and 1990's, so you can google the details. Some of the techniques, like focusing laser energy to create plasma thrust have been demonstrated, while laser energized MHD is tomorrow's technology. By the time we have star flight, these technologies should be mature enough to deliver to a client species.

We may have to build most of the parts in orbit and fly them down (leaving the power stations in orbit), and once the aliens get into space they can be taught how to work the 3D printers and other devices needed to assemble more spacecraft in orbit. 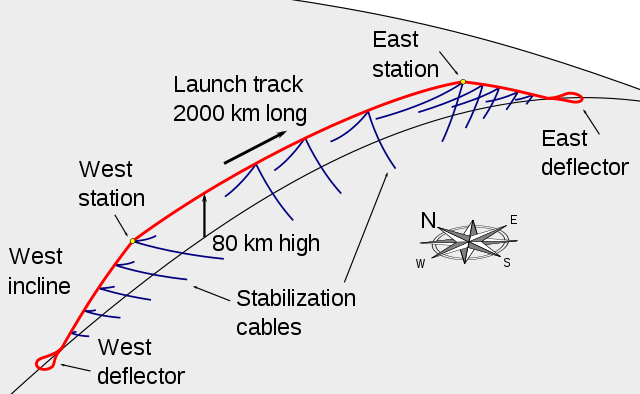 Unlike a space elevator, a launch loop does not rely on tensile strength; it's held aloft by its own momentum. Its power requirements are large, and needs to be continuously powered to remain aloft, but achievable in the 500 MW range (more on a high gravity planet). It can have a very high launch rate of dozens of launches a day supporting building structures and spaceships in orbit.

A launch loop does not put the payload in a stable orbit. The payloads would need to have their own motors to achieve a stable or higher orbit, or to achieve escape velocity. But most of the delta-V required will be provided by the launch loop, so the payload will need a far more modest motor and fuel supply.

The tyranny of the rocket equation says that as your delta-V requirement goes up, your fuel weight increases exponentially. More fuel means more mass means more fuel... This means the a rocket with a delta-V of 30 km/s needs to be four times larger than one with 15 km/s. This is why the Launch Loop becomes most useful, the sum of the parts do not equal the whole. If the planet requires 30 km/s to reach LEO and the Launch Loop provides 15 km/s, then the payload needs only to provide 15 km/s. A 15 km/s rocket will be a quarter the size and complexity of a 30 km/s rocket and well within conventional rocketry.

There are ways of accelerating objects into orbit using nuclear detonations. It's not the easiest mechanism to control, but it exceeds petrochemical sources in terms of energy output, and would likely make it possible to at least place satellites in orbit, or even send probes out ... even without external help.

However, if a spacefaring race did encounter the inhabitants of such a planet, they could use gravity assisted flybys to capture and accelerate suborbital craft up to orbital velocity. Tensile materials limits could be overcome by using multiple tethers, or dividing acceleration into multiple passes by multiple craft.

A species on such a planet would not be giants. Large creatures would be crushed by gravity. In fact they would have to be very small - maybe insect-like. If they have any ability to fly in their atmosphere, which presumably is quite dense, maybe we could catch them in nets from orbit and reel them in.

In any case, our space-craft will be enormous compared to anything they could construct. We could perhaps let a weighted thread down to the surface with a hook. They could attach an escape-pod that contains a few of them together with their food and air. Then we haul them in.

We could send them plans for a super gun and a kit for collecting genetic samples of themselves. They could then fire packets including genetic samples, effectively seeding their species beyond their gravity well even if none of the currently living beings managed to escape their planet.

Super gun technology is pretty cool: effectively it amounts to a very massive artillery gun powered by one of a number of things but potentially including hydrogen. Large designs can include multiple, sequential firing chambers. A super gun could also be designed based on rail gun technology that would enable a small package to break out of even a very deep gravity well.

Downsides include the massive acceleration that would kill any living organism (hence: packets of genetic samples being sent in carefully constructed containers) and the fact that you probably have to travel through a whole lot of atmosphere at extreme velocity before you escape the gravity well, which makes for some very high temperatures.

Depending on the physiology of the aliens, it might be possible to freeze them and revive them again, cryogenic "sleep" style. If we could work that out (they are supposed to be advanced after all) we might be able to pack frozen aliens into super gun projectiles and their frozen state may allow them to handle considerably greater acceleration. Make a long enough "barrel" with gradual enough acceleration and you just might be able to fire aliens into space.

Not the answer you're looking for? Browse other questions tagged science-based planets technology physics gravity or ask your own question.

9
Can you catch a fish with a fishing rod... from orbit?
12
What would be some possible ways of escaping higher gravity planets?
1
How massive can a terrestrial planet be and still be habitable? Will its space civilization have problems due to its escape velocity?

12
Could there be a planet bigger than Earth, but with less gravity?
9
Could a 19th century setting support purely mechanical orbital satellite and manned orbital launches?
0
How high does a tower have to be, so that centrifugal force launches a payload into space?
2
What social impacts would there be if wormholes and stargates had enforced conservation of energy?
2
Minimum required technology for a species to reach space?
2
Could a habitable planet with lower gravity have a thick atmosphere?
6
If an alien had evolved on a planet with 10 times Earth's gravity, how far into Earth's Ocean could they dive?
5
Could an alien species from lower gravity survive on Earth?
3
What is the largest asteroid humanity could survive?