In my setting the world is practically covered in dense forests, mountains or mountainous forests. As to they whys, for now its easier to just say that's the way it is. Technology in this world is near to farther future if that makes sense. So things like ETC, CLG, and railguns (can only scale down to what is basically a trailer truck with a cannon mounted onto it, limits are at energy storage and generation) exist and are in use. The weapons are more than capable of hurting our modern day MBTs due to the significant higher muzzle velocities, of course traditional weapons with far lower velocities exist. Active point defense systems are mostly reliable and in use. Experimental armor types such as electrical armor and a very limited and early development field effect shield system exist. That for all intents and purposes can re direct incoming munitions at a slight deflection angle to try to force a miss if lucky. Drones/ parasite machinery is not necessarily a concept anymore, rather using drones for information gathering or use as defensive bait are in common use. Basically technology is advancing at a fairly reasonable pace

The forest and landscape however is limiting. The dense forest has a wide variety of fauna, some trees prove to be incredibly tough to break down leading to a situation where there is sustained forestry during the fighting (simply burning down a forest completely isn't a solution, though weaker trees and fauna can be chopped down). Forest canopy is at a high elevation, but for all intents and purposes sending munitions through the top of the forest isn't possible; so arcing artillery platforms are challenging and is a central point (basically fighting is confined to the forest and aerial/long range artillery support isn't really possible). Mountainous regions are also open or covered in thick forestry as well. Parts of forests can be toxic or caustic to humans without adequate nuclear, biological or chemical systems (NBC). Others can interfere with radio signals or interfere with sensors. As for if there's maneuver warfare or dug in, I have not entirely decided that yet.

Suppose two peer forces are stuck fighting in what is essentially the mountains or plains of Afghanistan, and the forests of Vietnam combined. What kind of combat vehicles would arise in a conflict where both sides were forced to fight in such an environment (leaving or ignoring the fight is just not an option). And for plot reasons the entire machine cannot be remote controlled or AI based (forest interference, enemy ecm, the thick forest itself etc.) Humans should ideally be in control of it, how much though doesn’t really matter and the help of advanced systems to automate processes are more than fine.

Hold it right there. You know the old saying about fighting the last war? Tanks have a particular time and place, as does armour in general. Modern anti-armour weaponry is already fearsomely effective... the way to protect tanks against such things isn't "slap on more armour", but "fit some active defenses" (eg. Trophy).

Your setting appears to have even more effective anti-armour weapons. The way to fight them is not to use more armour.

Drones/ parasite machinery is not necessarily a concept anymore

edit: Frustratingly the question was edited after I started writing my answer but before I posted it. The section I had written on automated mobile weapons platforms has now been removed from this answer

So, you say that drones can't be used, but you also have a setting in which some drones are used and in which there are advanced systems that can assist humans which are apparently not a problem. What's the difference between a highly effective active automated point defense system and an automated weapon system? ¯\(ツ)/¯

Given that you are handwaving in the requirement for meatbags to be on the front line, the thing to do is to give them exoskeletons to help them move further and faster whilst carrying more. Armouring them against anything more substantial than shrapnel probably isn't warranted, due to all the aforementioned overkill weapons.

In densely wooded or built up environments, vehicles much larger than a person start to become a liability very quickly. Exoskeletal infantry and robot-mule like pack trains would seem to be the way to go.

As for if there's maneuver warfare or dug in, I have not entirely decided that yet.

Digging in seems like a fairly pointless thing to do these days. Building massive fortifications is very expensive, and it ties you down in place. It also seems like a risky thing to try given future weapon improvements.

But who knows. We don't know why your people are fighting, so maybe you can contrive a way to recapitulate WW2 era tanks'n'trenches in your scifi future. That might be worth a separate question (but FWIW, this is just a scifi version of the fantasy arms control trope, and I'm never in favor of that sort of setting. Seems like a failure of imagination).

If energy shields can defend against your range of overkill weapons, then the question isn't about armoured vehicles, but shielded vehicles which will likely be a bit different. But without listing the capabilities and limitations of your magical shields, they can't really form part of an answer. Perhaps a separate question is in order?

The main problem is you want to use armored fighting vehicles in terrain they are simply not effective in.

I suggest you study the military campaigns fought in Burma, Papua New Guinea and the Solomons during WW2. These campaigns involved fighting in dense tropical forests, hills & mountains bisected by rivers and swamps. Large tanks and even heavy artillery pieces were of limited use.

Compare the small number armored vehicles used in those campaigns to the thousands used in the deserts of North Africa, the Russian front and in Western Europe during that war where the terrain was much more suitable for tanks i.e. much more open. The problem becomes evident.

So given the strict limitations you've imposed beyond the use of SF grade compact mechs (think machines the size of the cargo walkers in Aliens 2) or armored/load bearing infantry 'battle' suits your only option for fighting platforms would be;

Kill the forest with poison. 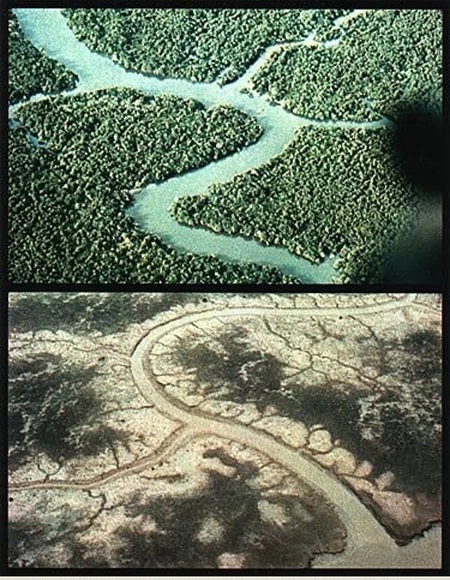 Kill it all. Let God sort it out. This is what Agent Orange was for. We have better herbicides now. Probably even better and faster in the near future given that /technology is advancing at a fairly reasonable pace/.

Drones can spray the trees. Their leaves fall off a few days later. With a canopy that thick there will probably not be an understory. If there is, the drones can come back for a touchup. That should take care of vision as well as toxic places.

Now the vegetation is dead you can bring to bear your superior firepower. That is why the US used Agent Orange in Vietnam. It makes sense.

If you are really digging little mechs like the Empire used on Endor, you can have them too.

I envision the character of the patchoulli-smelling long haired forest lover who makes an impassioned case to the military about the impossibility of fighting in the forest. This tree hugger did not envision the possibility that the military was ready and eager to poison the whole forest down to bare sand. Now this forest loving hippie and his peace and love contingent must save the forest by inventing a method to make war in the forest that is more efficient than killing the forest.

Well, maybe you have found the environment where they do work. Assume that the trees have roots, which can come to the surface in inconvenient places. Assume that trees fall, and might be hard to remove or avoid. That sounds like a place for a legged fighting vehicle. Not necessarily two-legged, but the fact that trees are usually vertical might encourage vertical fighting vehicles to move between them.

Not the answer you're looking for? Browse other questions tagged warfare military railguns or ask your own question.

12
Dragon vs Antiaircraft Artillery
1
Reducing human military capability
12
Country at constant war - Is a permanent powerful economy possible?
13
What is the optimum shape for a space warship which primarily uses rockets for offensive weaponry?
5
Recoilless Rifles vs Bazookas against non Mechanical Targets
2
What kind of support forces would accompany a one-noble armored fighting vehicle into the mountains on a propagandized anti-insurgent mission?
5
Conditions for Modern Trench Warfare