Is it posible for an animal to have elongated/visor-like eyes? 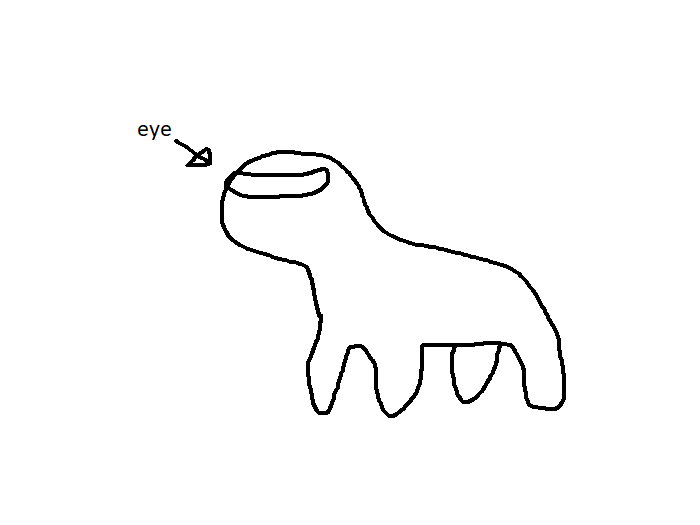 I had this idea a while back, but I can't seem to find any information about this topic. The idea was that instead of making it so the animal had multiple eyes it would have one continuous elongated eye, but then I realized that it wouldn't have a very good sense of depth. To fix that I thought about giving it compound eyes but I'm not convinced. I also thought about giving it multiple irises but I don't think that's how it works.

Edit: Ok I have a few things to say. First, thanks a lot for all the help! Second, both answers I got are exactly what I was asking for but I'll keep the question open for some time just in case someone has a different approach. Third, someone asked for a visual representation so I did a rough drawing of how the eye would look like.

A creature can have a single elongated eye. That's entirely plausible.

Barring genetic manipulation, you'd be looking for a proto-form that has multiple eyes to begin with, and then work towards combining those individual eyes into a single eye.

Functionally, such an eye would almost certainly lack horizontal movement (those muscles would have atrophied and been genetically "turned off" long ago), though it might retain some vertical ability. Mind you, such a creature with some vestigial lateral eye muscles that suffer from nystagmus would be hilarious to watch!

Cosmetically, the creature would have a continuous conjunctiva, multiple tear production systems and a single upper/lower eyelid.

For added creep factor: have the eyelids open and close in a wave-like fashion, so some of the eyelets are open, some closed and some in between at any one time. As if twelve baleful irises staring at you isn't creepy enough already!

For sense of depth, you need multiple views of the same feature. Accomplishing this with one retina is absolutely possible, you'd just need a way to tell the view A of feature A apart from view B of feature A ( ... and from other views of features B-Z, but this problem also exists with two separate eyes).

Temporally this might be easiest - just one iris is open at any moment, but the frequency of switching between the (however many) irises is high enough to still work for depth on objects in motion. (Or the iris(es) move, or it is one iris-band that is undulating, ...)

Chromatically - different irises have different color-filters, easy, but might also be easy for prey to out-evolve (dazzle patterns in colors matching the filters)

By shape of bokeh might be fancy, but also well suited to neural processing: Every iris has a different shape (circle, triangle,...) - so the bokeh of every feature is coded, thereby binding feature to iris

If the irises are so far apart that the images do not even overlap, that would also work.

To direct your gaze, you would need to move your long-eye/head, or maybe just the irises: Imagine a cylinder of retina (in the extreme case, like an all-eye stalk), interspersed with chromatophore-like iris-lens-assemblies (ILA), that can be opened and closed. That way you would only have to open the irises pointing in the right direction, and voila! - There would be more blindspots (in the extreme case, as there would be no retina on the ILAs) per impromtu 'eye', but that could be ameliorated by having more than two 'eyes' facing in any given direction.

Compound eyes of course would also work to give your character that Geordi-LaForge-visor-look, but frankly, it's cheating - with compound eyes any distribution on your body is fair game.

Not the answer you're looking for? Browse other questions tagged creature-design evolution anatomy or ask your own question.

5
How would different kinds of eyes (polycoria, differently shaped pupils, etc.) work?
15
Could an organism see in infrared light as well as normal light, using its brain to process what it sees into a single image?
5
What would be the ideal terrain for promoting the evolution of blade feet that sink into the ground?
0
Proud warrior race with terrible depth perception. How do they look?
3
How do I explain the compound eyes of my creatures?
28
A fast aquatic predator with multiple eyes and pupils. Would these eyes be possible?
4
A creature with a built in flashlight
8
Anatomically correct Quetzalcoatl
8
How could be a relatively "universal" eye?
7
Can the cobra hood ribs turn to and be used as functional "pseudo-limbs"?