Let's say that there is a warlike tribe that focuses on raiding small villages. They are kind of like the Vikings, but they don't arrive by riverboats; they strike the oblivious villages, arriving quickly on large cats. Then, they quickly exit after stealing valuables.

The tribe chose to raid villages effectively by utilizing fast mounts. This way, they could strike and exit rapidly. Unfortunately, horses weren't an option; they don't live in the area (because feline mounts are just more interesting). So, they chose a feline species that seemed most effective for this purpose. The question is, which species of felines did they choose?

TL;DR: There are no suitable species, so you'll have to make one up, and there are nigh-insurmountable obstacles to using carnivores as mounts.

Don't worry about the size

The Siberian tiger which is pretty big for a feline perhaps comparable in size to a steppe horse which have famously been used for raiding and warfare. The tiger is a little shorter in the leg, so they'll be awkward to ride. Your fictional cats will have to be a bit leggier, or a lot larger all over to be suitable for the role you have in mind.

Here's the problem though... kitty gotta get fed. On the steppe, your little horses can eat the stuff growing under their hooves. Your oversize tigers cannot, and with their normal lifestyle they need seven to ten kilos of meat per day. And those are tigers who aren't hauling around a bunch of humans on their backs (tasty, tasty humans), or walking long distances when they just want to have a nap, etc etc.

How long will your raids take? a few days? How will you be hauling an extra 30-40kg of meat with you? How will you keep it in reasonably good condition, especially in the summer? Consider the risk of your enemies sniffing you out by the hundreds of kilos of off-meat you carry with you and enormous mounds of carnivore poop your warband will be generating!

So, slot into the "required secondary talents" section: raiders must also be proficient herdspeople in order to feed their mounts.

Also their mounts will absolutely terrify their livestock, and so will be a poor choice for herding, and will have to be kept well separate which even further increases the logistical difficulties!

The species shouldn't be impossible to tame and train. The tribe is using the cats for raiding, and it would be bad for them if the cats attacked them instead or swayed to another direction.

Cats aren't horses, and most aren't pack hunters. No-one has done a good job training them for war or work, partially because they are astonishingly dangerous to be around (even more so than horses which can kill or cripple you when angry or frightened, but won't generally eat you when hungry) and partially because they are so expensive to keep (because all that meat requires a lot of livestock farming).

You're going to have to just handwave this one in, I think.

They won't be running a long distance. They just need to be able to enter and exit the village. So while some stamina might be necessary, the species don't have to be extremely sturdy.

Not raiding over long distances? Then why are you bothering with mounts at all?

Walking long distances does require stamina, especially if huge amounts of meat need to be hauled along too.

The question is, which species of felines did they choose?

A fictional one. Make something up to fit the scenario... you're already adjusting size, habitat, behaviour, so you may as well go all the way because I don't imagine any species of felid living or extinct will have been appropriate. 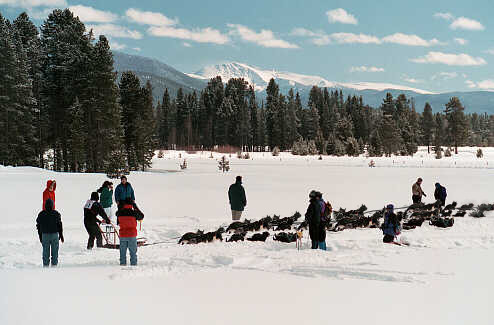 Tucker credited the success of her cats to "vigorous training in the Wallowas," mountains in eastern Oregon, and to the "agility, speed, and large size" of the Kravchenkos. These animals, bred as "watch cats" in Russian monasteries centuries ago, have "enormous potential in sled racing," she said.

Your raiders arrive on cat drawn sleds (or chariots, in warm weather) each with several dozen cats. You will note that these are cats of "large size" thus fulfilling the request in the OP. The sled-bred cats are good at what they do and less dangerous than big cats, although they will still give you a good scratch if you pet them too long, or don't pet them when they want petting, or pet them in the wrong place, or pet one of the other sled cats.

Not the answer you're looking for? Browse other questions tagged medieval mounts or ask your own question.

18
Is it possible to ride a carnivore species?
6
Could an entire civilization live in an upside down forest?
8
How to make a saddle for a feline mount
7
How long could an alien species survive at sea?
63
What would a medieval war against an aquatic race look like?
7
Lizardfolk are too OP, what weakness would make the most sense for them?
39
How many generations would it take until the noble and peasant classes become different species and cannot interbreed?
15
What weapons would be used to kill giants by a viking era civilization?