Can a (habitable) planet change its rotation speed?

Planets change their angular velocity when they orbit stars because they follow Keplerian orbits with (typically) non-zero eccentricity. The bottom line is that they are not always revolving at the same speed.

Note: The planet should be habitable.

I'd like to apply this to the rotation of a planet. Can I create an arrangement such that it rotates at different speeds at different periods of time? This would mean that some parts would have, say, a 12-hour day, while others would have an 8-hour day or a 14-hour day.

This is not hard-science, because I want people to have a bit of fun with this one. But stay realistic!

In general: the conservation of angular momentum in orbital motion leads to Kepler's second law. The velocity and angular motion changes over the course of the orbit. Energy is transferred between kenetic and potential energy, their sum being constant. The body is not stressed except by secondary tidal effects.

The concervation of angular momentum of the body's rotation will be a gyroscope: the axis and the rate of spinning around it will remain constant no matter where the body is moved to during its orbit.

Application of a force will cause the axis to precess. This moves the axis in a different direction to the applied force, and the acceleration is felt throughout the body. To apply a torque, pushing one part of the planet differently than another, cannot affect everything equally like free-fall, so stresses will be felt throughout as the acceleration is trasmitted from the place of its application to the rigid body.

Changing the rate of rotation without changing the axis will also necessarily cause stresses and accelleration to be felt. Energy will be lost, so such a process can't simply flow back and forth, but must be powered.

Besides that friction in any real extended body, you need to transfer angular momentum between degrees of freedom in various bodies. The moon is receeding because the tide friction slows the earth and the angular momentum must go somewhere.

How can angular momentum be transferred to/from a body? Only through a force acting non-uniformly on the body. That's hard to do with gravity since the only non-uniformity is secondary differential due to the distance across the body. So, it won't act quickly.

Actually, the Earth does change its rotation cyclicly over a year! 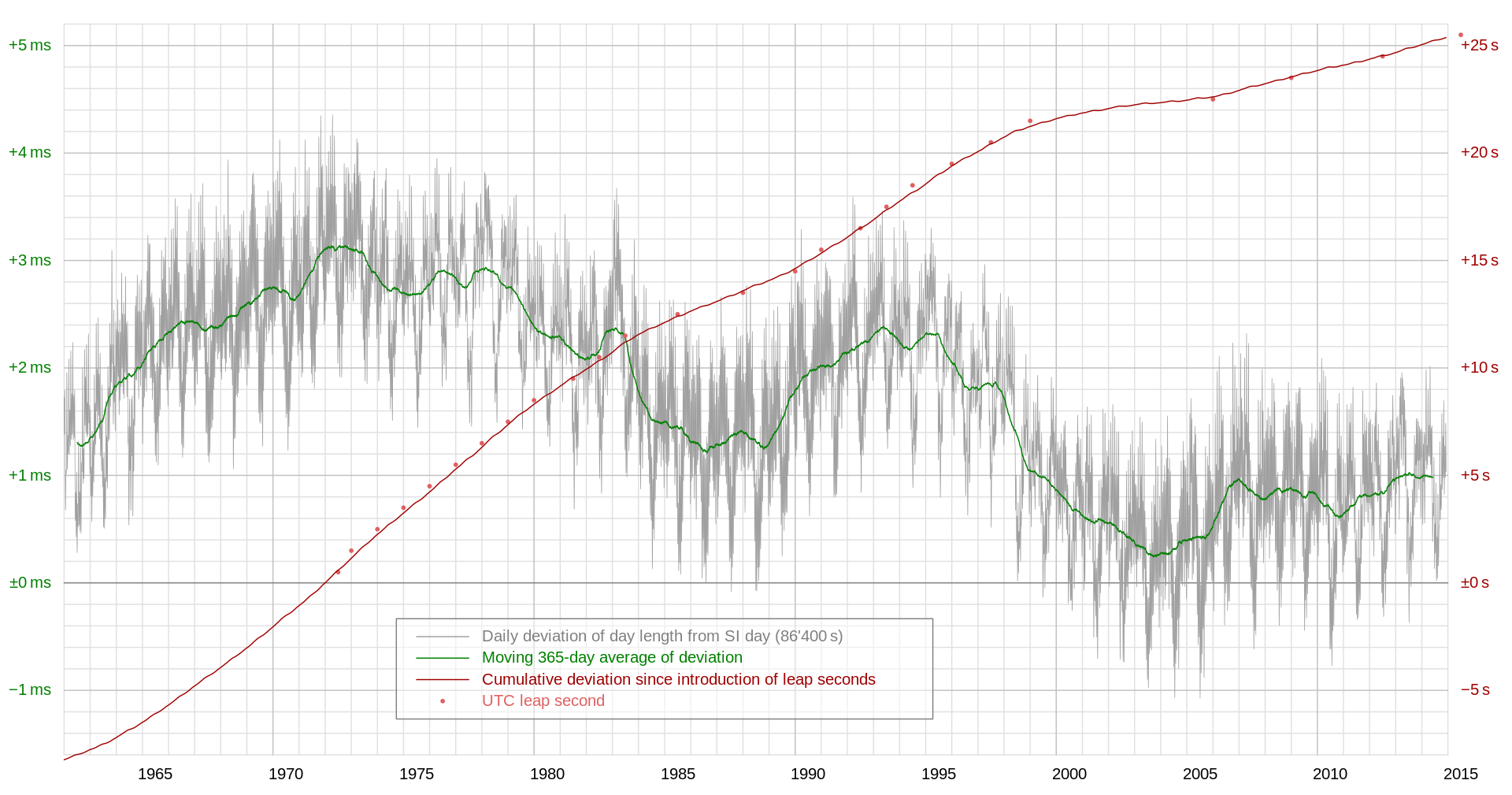 If you zoom in, you'll see that the time goes up and down by about 2ms each year, with the real change being a longer slower shift of the average.

This is due to transfer of angular momentum with the atmosphere, which is seasonal and differs in the northern and southern hemispheres. The overall trend is slowing, due to friction.

Some icy moons may have a solid crust over liquid mantle, and undergo superrotation as it slips. The tidal stress on Europa for example doesn't match the rotation observed, so it appears to have slipped during the past. Again, this has great friction and isn't something that can continue indefinitely.

If you had part of the body rotating (or holding angular momentum in a more chaotic manner) and transferring that back and forth with the crust, it would be very small or very temporary. You would need a way to add energy in a controlled manner to replace the friction.

You could do this if you had two tidally-locked planets that orbited eccentrically around each other. The entire system would also be rotating in orbit around the star. This would probably need to be an artificial creation, and I am dubious that it would last long in astronomical terms - I suspect the orbits will not be stable.

Obviously not to scale, but consider this horrific MS Paint drawing to get the idea: 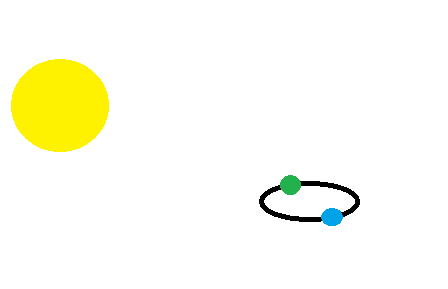 The planets would "rotate" faster as they got closest to each other, and slower at the farthest point away. Basically this takes advantage of changing that revolving speed and kind of warps that into subjective rotation.

In order to understand the physics of this consider something we can actually see - an attractive figure skater. I am sure we have all seen what is effectively dancing on ice. When the young lady starts a spin you will often see her with arms (and leg) stretched out but she will then tuck in tightly and speed right up only to stretch out again to slow down enough to move on to another action.

Likewise on much harder to imagine scales of whole planets and systems energy and matter can change state resulting in different speeds of rotation, amounts of friction, heat and so forth without any actual loss or gain of said energy and matter from or to an outside source.

For example Earth has this odd but life sustaining body of gas arround it against which Earth's movement causes friction. Friction transfers orbital speed into heat although (and this is where my understanding starts to hit my limits) the change is really very small indeed.

It has also been explained to me in the answer to one of my own questions that the moon is very slowly moving away from the earth as the two bodies very slowly approach tidal locking with each other.

So generally there can be change and it can and does happen all the time.

Going back to your non hard science needs we could imagine some super flora that from time to time uncurls massive limbs clean out of the atmosphere. The result would be that the planet would slow down without loss of energy. I can only imagine what effect that would have on weather systems. Probably a reduction in air movement.

Later when it has collected whatever radiation it needed (at the end of the season) or when the winds have flattened the massive fronds back down to the ground the planet would increase in speed again.

Of course at those sorts of scales you would have to hand wave some structural integrity factors like how anything that big could exist without falling apart, etc.

But after the hand wave for the physics of the flora you would have the same result as the attractive lady in the ice skates spinning faster or slower just based on limbs in or out.

"The bottom line is that they are not always revolving at the same speed." No, not really.

Planets do change their rotation speed, normally as a result of tidal locking. But this is a very, very slow process - millions to billions of years. Keplerian orbits/eccentricity simply has no gross observable effect.

24
Equatorial icecaps and polar jungles a fantasy or reality?
2
Is there any way to tidally lock Earth to the Sun in its current state?

12
A world with a moon orbiting much closer than ours
8
Moonlight and the night side of a tidally locked planet
22
Realistic sky of an Earth-like moon orbiting a gas giant (length of day and size of celestial bodies)
14
Seasons on Infinite Cylinder Planet
6
What are the day and night fluctuations for a moon orbiting a planet the size of Jupiter?
9
If the Earth was part of an ultimate solar system, what would the sky look like?
22
How do I calculate the hours of daylight on an arbitrary planet for a given day at a given latitude?
5
Long Term Evolution of Double Planet System in Close Orbit
3
What (if anything) can cause a substantial and stable shift of the magnetic poles of a habitable planet away from its geographical ones?