What shape most efficiently disperses an overpressure wave from a nuclear weapon?

One rule of architectural design in one of my settings is the prime number rule: a building that abides by this rule can survive a 2-kiloton nuclear surface burst 300 meters away 5 times in a row while keeping the occupants safe. It's called the prime number rule because 2,3, and 5 are the first prime numbers. Don't laugh, weirder things have been come up with IRL.

In practice, no nuclear weapons in my setting reach the level of 2 kilotons, as nuclear detonations above 1 kiloton are forbidden by treaty, and generally result in the offender getting scrubbed off the map by everyone else's megaton-level missile forces, but corporate and the public both decided that the prime number rule was a snazzy quality-assurance kind of thing, and so it stuck.

One part of surviving a 2-kiloton surface burst at 300 meters is withstanding, according to NUKEMAP-2:

The 65,000 rem of radiation can be resolved, and I already have done that. However, my problem is the overpressure. I cannot find as many reliable sources regarding defense against overpressure.

What shape of construction most efficiently dissipates the energy from a 24-psi overpressure/shock wave?

Undergrounding the structure is not a viable option here; the area in question has a rather high water table, and the soil is heavily contaminated with perchlorates that would seep in and be detrimental to the structure's occupants, among other consideration. I need an above-ground structure, and I need to know its shape.

With explosions coming from potentially multiple different directions, you need the advantages a circle can give you. Maximize internal space per unit of surface with a sphere, although this isn't always the most living-space friendly option. A sphere, like an egg, is strong against external force disproportionate to the thickness of the wall.

The classic example of a blast-resistant above-ground structure is the German Flak tower. A number of these structures still exist simply because they are so hard to demolish that people repurpose them or even bury them rather than demolish them. These are, admittedly not quite circular due to construction limitations. But the closer you get to a sphere or circle, the more resistant your structure will be. 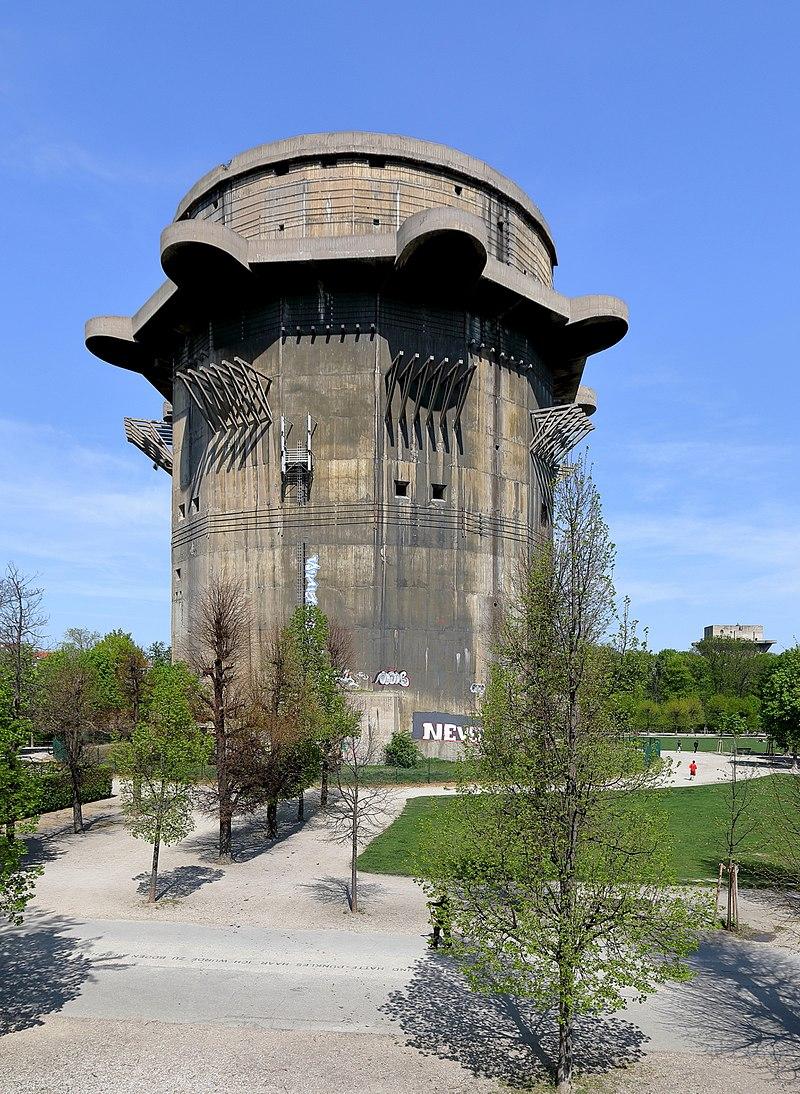 The lateral cross-section will break a lateral shockwave, the catenoid shapes will distributed the load with a minimal surface.

The space underneath (between the stilts) will determine reflections of the shockwave on the ground, weakening it fast. If way too much overpressure in top, the stilts underneath will absorb a lot of the energy by crumbling - rebuilding them is way easier than rebuilding the lenticular shell.

Alternatively - just the upper catenoid shell should do just fine. A low elevation at the peak will offer a low profile on lateral hits by experiencing the blast on a tangential direction.

Disclaimer I'm not a building engineer, doing my best to suggest a plausible solution.

I know you say the radiation is taken care of, but I just want to point out that 65,000 Rem is 10,000 times the OSHA lifetime safety limit. That's a stupid dangerous amount of Rem. Roughly 500 Rem is considered fatal exposure.

If you built your shielding out of concrete, it would take 2 feet to get the radiation levels into low single digit Rem values.

Which is good, because a 20 psi over pressure wave is generally understood to damage or destroy heavily built concrete structures.

So you're going to need something that exceeds "heavily built" if you want to survive the 17 or 24 psi over pressure you site in your question. So probably a dome, since its a naturally strong shape that will evenly distribute energy from every direction.

Basically, these structures are going to be 3-4 foot thick concrete domes without any windows. Doors and other penetrations (eg ventilation) will be at ground level, and protected by short concrete tunnels.

When the United States and Soviet Union governments were designing structures that were required to survive nuclear explosions, they universally went to designing underground bunker complexes. Most famously you have things like Cheyenne Mountain in the United States or the launch bunkers used by the US nuclear arsenal, there were a number of other underground complexes constructed by both sides of the Cold War.

If building above-ground structures was a viable means of resisting a nuclear assault, then the United States or USSR would have done so, because it would have been much cheaper than building underground structures. The fact that they never did suggests that it isn't.

Not the answer you're looking for? Browse other questions tagged construction architecture military-defense nuclear-weapons or ask your own question.

3
How long would it take for the effects of a nuclear weapon to wear off?
2
Solar Flare disabling Nuclear Weapon defenses?
9
What situation would prompt the world to dump the use of Atomic and Nuclear Explosives entirely?
2
Effects of a Rapid Fire Nuclear Weapon on the Environment
10
What would an above-ground residential apartment designed to negate the effects of a one-kiloton nuclear surface burst at 500 meters look like?
5
What are the advantages and disadvantages posed by the structure of an anti-nuclear hemispherical housing installation?