In this post I asked if it would be possible for a species of bird to create saliva capable of curing animals (even those of other species) and stimulating plant growth. The answers and comments hinted that this would be scientifically impossible, only if the bird uses magic. So, I decided to divide this bird species into two: a farmer species and a healer species. In this post I will focus on the farmer species.

Well, the details are as follows: this species produces a liquid that comes out of its mouth along with saliva (for short, I'll just call it "saliva" from now on), this saliva is poured into seeds and plants to stimulate their growth . The bird's diet is based on fruits, flowers and herbs. This bird has a "bag" that it can use to carry water and then pour it into the plant to water it. That said, I ask: how could an animal produce this liquid?

Remember to reveal these things more also to answer the question:

You make such a liquid yourself! 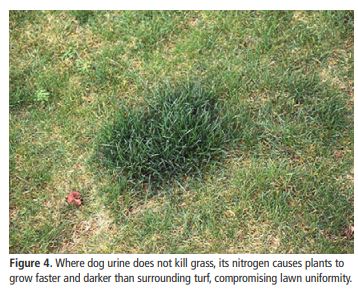 Yes you do you wondrous creature! I do too. Also the dog, that used its growth-potentiating liquid on the depicted grass. Marvel at its lush greenness! The grass next door is jealous and hopes the dog will come back with more.

A biological liquid containing nitrogen, phosophorus and other minerals needed for plant growth is no fiction. Urine can serve fine in that regard. It is fertilizer. Perhaps your bird saliva is such that concentrations are never so great as to "burn" the plants so treated as urine can sometimes do.

This is in response to the "healer" birds...

Perhaps a type of bacteria, such as bacteriophages, are active in bird saliva because their water source is densely filled with this.

Consider the presence of bacteriophages in the Ganges river, and their scientific contribution to giving the water "healing properties".

one hypothesis is that the waters of the river contain bacteriophages — viruses that replicate within bacteria and are toxic to them.

Dr. Mayilraj from another source explains,

the fresh water sediments from the Ganges house several novel viruses, which were never reported earlier. These bacteriophages are active against certain clinical isolates, or viral strains and can be used against multi-drug resistant or MDR infections.

Not the answer you're looking for? Browse other questions tagged science-based creature-design avian or ask your own question.

7
How could an animal produce miraculous saliva?