How can a Middle-Age spy traveller hide as many ropes and gags as possible on themselves?

As I recalled about some Mermaids being tied up, I remembered some stealth game moments where the heroes, in order to have free moments wandering around without those annoying guards and honest citizens, could tie up a village to get their job done. Yes I mean it, you could tie up all the town inhabitants.

The infamous gang of roast trussers

I'm designing a reminiscence of such moments through the infamous ragtag "gang of the roast trussers". Roaming through roughly 12-13th century British medieval fantasy lands, these guys are truly evil : They tie up seemingly random people, rob them their freedom of movements on top of their belongings, then leave towards new lands. Be it a lone traveller, a caravan or even small villages, no one is spared. Everyone wonder why they don't kill up the victims, but it has become part of their legend.

And they are scenariously1 damn good at it : Each of their member have a wide range of sneaking skills to divide, conquer and tie up without anyone else noticing. These skills goes from the near-invisible ninja to the good-looking gentleman/woman whom you should definitely (not) trust. My question is about the latter one.

Their charms are mind-binding

The people's description will be blurred. It's not about that 1.84m tall blond man, who wears X things, but more a general approach to this issue, regardless of gender. Moreover, the tales have all blurred who they actually were or how many they were. Some say they were 3, others 10! And some say even enough to choke a whole sea port!.

Some of the members are effectively Trojan horses on legs. Good looking and naturally charming, they often take the disguise of seducing travelers (oftentimes merchants), through both clothes, fake documents and enchanting smiles. While people say their primary targets are nobles, it is not really the case since they are quite hard to reach with all their guards around. They only do so when a good opportunity shows up, with long and careful planning beforehand.

In order to do their deeds, their attire are adapted to best match the current job, as well as their manners and behaviors. It can come even to the point of crossdressing, which means that men can dress up as women and women as men if necessary.

Wrapping up the question

So here comes the question : In order to tie up people on the spot, the "spies" of this gang need to have ropes, a tranquilizant vial to quickly subdue people, and gags so that when they wake up, people "scream quietly" for guards (we wouldn't want to disturb them during their work after all :p!). They almost always carry a locked chest containing everything for their deeds, but it is tedious (and suspicious) to carry it all the time or to have to go back and forth to retrieve supplies. Therefore the goal is to have them have as much as possible equipment on themselves.

I have already a solution (literally and non-litterally) for the vial, so what's left are ropes and gags. Therefore... How can these people hide as much as ropes and gags as possible on themselves?

I will determine what would be the best answers roughly from this : by the number of individuals that can be constrained before restocking (per solution type), how well the equipment can be hidden and adapted to different situations2, and to a lesser extent how easy/fast tying kits can be pulled out and how fast/easy they can be restocked.

Know they have a standard procedure for tying up people : They are laid down, face towards the ground. The hands are bound back with one rope, the feet with another, and another joins the two ropes together to prevent people from wriggling away. Therefore a total of three ropes are needed for an individual. People are not blindfolded, but they are silenced, so one gag is needed per person. The gag can be anything you can think of : Rope, tissue...

Also consider that because they use their charms to get people where they want, they might get close to their victims, up to the intimate zone (Without removing clothes, if you wonder). This might potentially reveal their tools to them, ruining their infiltration, so be careful about this. If necessary, they can avoid some parts of their body being touched, if that's not too big or easy to reach (ie. their back, legs and feet, ...).

For the sake of the question's simplicity and because they are not that evil (or are they?), children are spared from this, so you don't need to account different rope sizes. Also, remember they target more the lower and middle classes, as they don't need very specific preparations to wrap up a personal guard, so focus on these classes whenever possible.

1 : Read by this that their supernatural efficiency at tying up so many people and not getting caught is happily handwaved by the power of myths, legends and -most importantly- scenarium. Don't focus too much on this, please :).

2 : I'm looking for answers that can work up as standard equipment. Things that work for very specific situations like, I don't know... a "rope pan" only for when you're in a kitchen is less interesting for me :). Yeah, I know, pretty bad example, but you get the gist."

Middle-aged medieval traveler sounds definitely like a perfect depiction of a travelling Catholic Monk - they often wore a girdle (or a cord) as a common and unassuming part of their attire. Granted, that's not much of a length, but the rest can be hidden in a false belly - going by the best tradition of no one else than Thomas Aquinas, who was by all accounts extremely obese. It won't be noticed unless you do strip search of that group of travelling pious men, and people are naturally reluctant to molest the servants of the God... 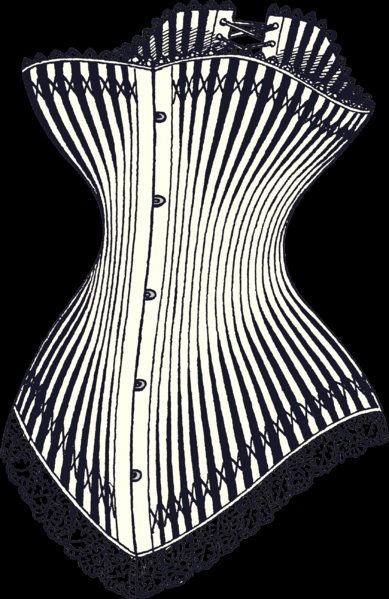 Corsets, bustles, brassieres, stockings, multiple layers of heavy skirts ... who can keep track of all the varieties of torture to which the medieval woman was subject? If you make them out of ropes suitable for tying people up, they may look a little more uncomfortable than the usual models -- be careful you don't start a fashion trend! Your cross-dressing men should come out of these encounters with a heightened regard for the travails of the fairer sex.

Have you ever seen those old pictures of the dawn of bicycle races, where there were no support cars and the athletes had to carry the spare tubes with them, wrapped around their torso?

Well, that's a solution you can copy: a few turns up-right to down-left and then crossed from up-left to down-right, closing with some around the waist loops can give you a decent length of rope, with the added benefit of acting like or being disguised as an additional protection because you never know when you will stumble in a rogue blade.

Not the answer you're looking for? Browse other questions tagged medieval-europe crime stealth .

4
How do you tie up a mermaid?

9
What would be in a contract between lycanthropes to keep their nature hidden?
18
How can I estimate how many people are living in a specific territory?
16
What impact would a society that had no imprisonment have on the people in it?
80
How to protect shops in the medieval era against thievery?
7
In a Westworld-esque Park, How Do I Prevent Humans Killing Each Other?
69
How can I hide my island?
0
How deep can an ordinary human completely bury themselves armed only with a shovel?
2
How Can Medieval People Defend Themselves Against Plopup?
7
How many rival criminal gangs can this fairly small fantasy city support?