Celestial arrangement for the Cube World

An earlier question here concerning a cube-shaped planet got me thinking.

What kind of mechanical arrangement could provide for different planetary analogs on each face? I'd like to have regular sunlight (like ours) on 4 faces, with rising and setting. But, 2 faces have red dwarf suns that are fixed in the sky.

For example, the planet could be in orbit around a neutron star, with the main sun at a trojan point (L4) and a red dwarf in L1.

The problem is that the planet's axis won't turn to stay pointed at L1. In general, the planet rotation needs to be roughly in the same direction as its orbit, to keep the 4 "belt" facets turning under the sun.

There are things like statites to allow something to hover over the pole, and that could be a mirror to implement the red dwarf. But, I want something more durable. It should be stable over geologic time with minimal corrections.

The stars themselves don't have to be normal. They can be (relatively) low-mass and nearby constructed suns, so there is some flexibility in the mechanics. I don't even mind having them turn on and off! A constructed sun would still be too large and heavy to simply orbit the planet: the planet would be lighter.

Any ideas on how to arrange things? The big problem is how to keep something unmoving when everything is moving to remain in orbit.

If the planet were locked with its orbit than the near face would be non-moving. So how do we get sun movement over 4 other faces? I like the idea of a statite or some less durable implementation for the second red face, and this has indeed been lost before the present time in the story.

I don't mean to allow the motions to be arbitrary, still powered by mysterious means. The system should work according to normal laws of gravity and mechanics, once it has been set up.

So the example, "The problem is that the planet's axis won't turn to stay pointed at L1." Is problematic because "just making it turn" via unknown technology is not a hard-SF answer. I want a mechanical system that will move naturally according to known laws.

Red stars* at the L1 and L2 points with a yellow star* in a polar orbit of the cube. 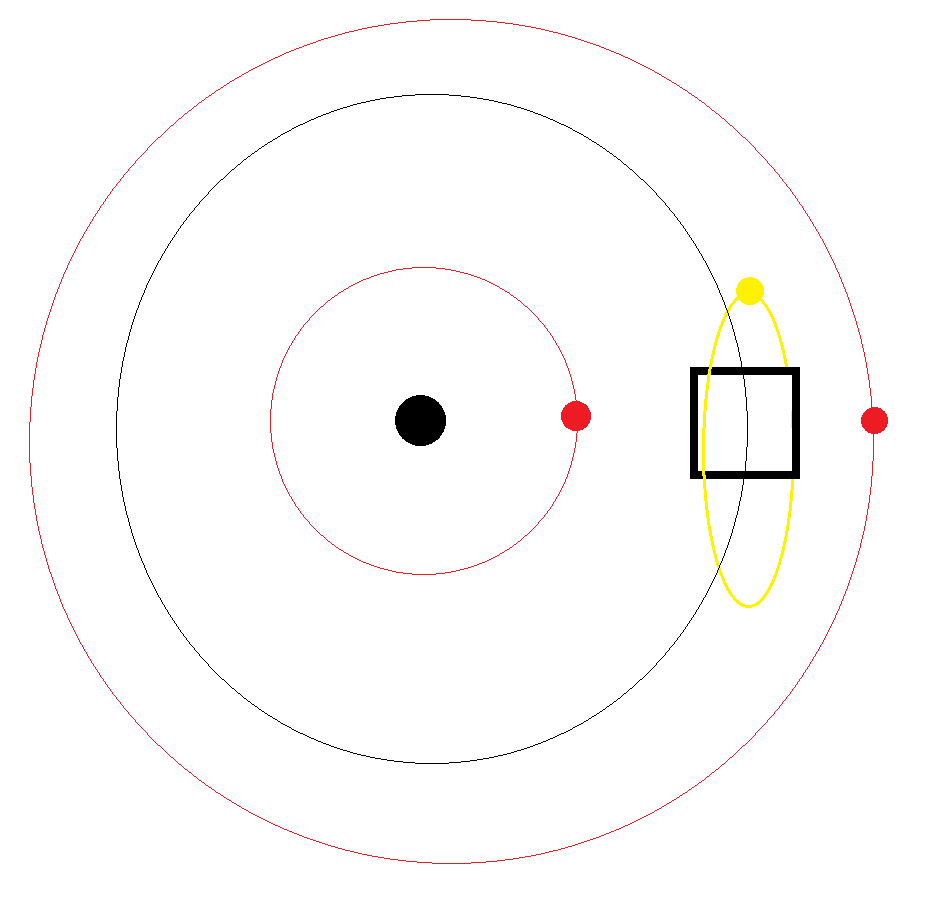 *Assuming you can make artificial star like objects much smaller than the planet.

Assuming that this cubic planet has a uniform mass distribution within its volume, it will not have a uniform gravitational field like that of a spherical body or a point mass, significantly complicating all orbits but geostationary ones. The variable gravitational field as the planet spins will also nudge objects out of the L1, L2, and L3 Lagrangian points, as these locations are dynamically unstable.

The two red dwarfs could be of equal mass and sit in circular orbits around their mutual center of mass. The binary red dwarf pair orbits in a plane perpendicular to its orbital plane around the star. The planet would be located at the center of mass around which the stars orbit, but the stars would really be orbiting each other because the planet's mass is negligible. The stable point at which the planet sits is like the L1 Lagrangian point The stars could then turn on only when they were over the poles (or only over one pole). This would produce a day/night cycle at each pole. However, the red dwarves would produce frequent eclipses of the primary star during two periods each year (when the orbital plane of the red dwarf binary is aligned so it passes through the primary star).

However, as there is no known mechanism allowing the stars to turn off, so one could instead have a large plate made of something like graphene orbit each star. Each plate would have an orbital period of half that of the binary star pair, phased so that it would block the star when its orbit went over the non-polar faces. As the plates would orbit symmetrically, the force on the planet from the plate orbiting one star would be cancelled by the force from the plate orbiting the other star. If red dwarf lighting is only desired at one pole, then the plates can have orbital periods equal to that of the red dwarf binary. However, the dwarves might be visible in the skies above the non-polar faces in this arrangement. I am also not certain of the ability of the graphite plates to resist tidal forces.

If one wants continuous polar illumination, no eclipses, and doesn't like having the planet at a point where it is vulnerable to small external perturbations, a different solution is required: Place red dwarves at the planet's L4 and L5 points (although given the mass ratio, it is maybe better to describe the planet as being at the Lagrangian points of the stars). Then place a pair of large parabolic mirrors at the planet's L2 point. The mirrors should be connected to each other so that they move and rotate as a single object (they are too far away from the star and planet for tidal forces to matter much). The mirror pair will have a rotational period equal to the orbital period of the planet, so that they will always point at the red dwarves. Inside each parabolic mirror, a secondary mirror near the focal point would concentrate the light into a beam. The beam from each parabolic concentrator would be directed out a hole in the back of the primary mirror, and reflect off of a planar mirror to direct it out perpendicular to the ecliptic plane. A rod made of something like carbon nanotubes would be attached to the mirror pair along its rotational axis and also extend perpendicular to the ecliptic plane as far as is structurally feasible. Mirrors at the ends of this rod will direct the light beams from the two planar mirrors into the atmosphere over the planet's poles. The atmosphere could then diffuse the light and refract it downwards. Illumination on the polar faces would vary in both angle and magnitude depending on the time of day due to the cube world's rotation and non-spherical atmosphere. Polar lighting would always be at a low angle to the horizon and would be largely indirect. The mirror system has no moving parts and is a single object. However, a system of reaction wheels and ion thrusters is required to keep it in orbit in the long run because the L1 point is dynamically unstable. Perturbations would come from moons of the cube world or from any other planets.

I suggest a system somewhat different from Josh King's answer, but instead of one red star being closer to the center of mass of the system, have them both along the same vertical axis as your cube world, which also rotates about its vertical. This trio then orbits synchronously with a Sol-sized yellow star around an extremely massive black hole, neutron star, what have you, near the center of mass of the whole system. Here is a conceptual (not to-scale) rendering: 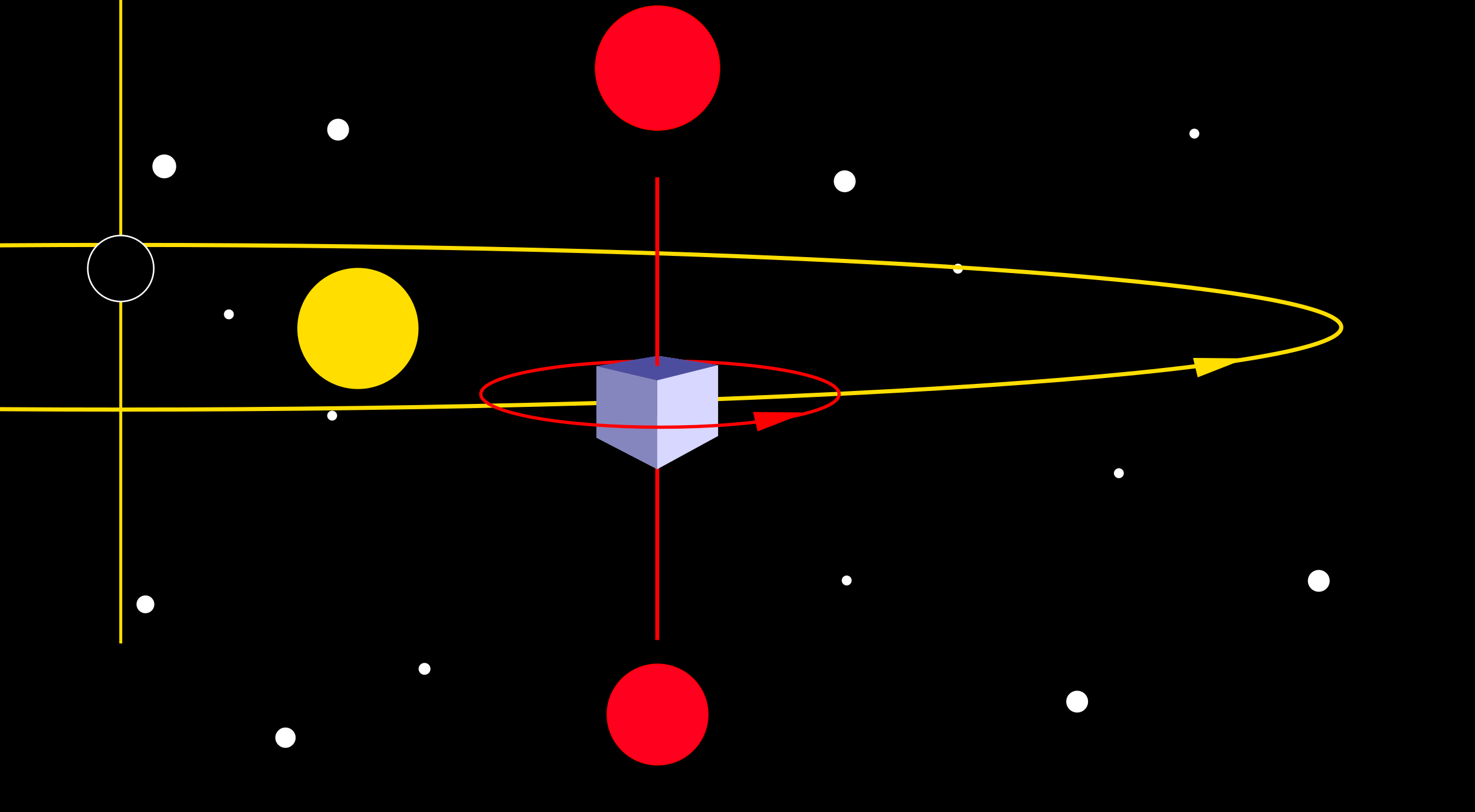 Here the yellow star and the red ones would each be on the order of 1 AU from the cube world, which itself would be several (dozen? hundred? Whatever it takes...) away from the supermassive center of the system. So long as the yellow star and cube-red-stars system complete their orbits about the center in the same period, this should achieve the desired effect without any need of artificial stars.

Not the answer you're looking for? Browse other questions tagged science-based orbital-mechanics kardashev-scale or ask your own question.

20
Are planetary orbits absolutely necessary?
23
How would a civilization that has been living on a “cube” Earth differ from one on a “spherical” Earth?
6
What is the viability of a planet rotating on two axes?
4
Polar Solar: A world on its side

3
Theoretical: Habitable planet in a binary star system
13
Liquid water on both sides of a tidally locked planet. Feasible?
9
How would this tidally locked planet be affected by its moon and would the moon have a deaccelerated orbit?
5
What would the impact of 2 suns have on the development of humanoid ocular organs?
8
Brown Dwarf Star vs Gas Giant as parent for habitable moon
10
Sun with low emissivity?
0
What are the upper and lower year lengths for a habitable planet of 40 Eridani A?
2
In This Picture, How Far Can One Binary Orbit the Other?