How might barnacles be made into giant sessile sea creatures?

Barnacles are a type of arthropod constituting the subclass Cirripedia in the subphylum Crustacea, and is hence related to crabs and lobsters. Barnacles are exclusively marine, and tend to live in shallow and tidal waters, typically in erosive settings. Typical acorn barnacles develop six hard calcareous plates to surround and protect their bodies. For the rest of their lives, they are cemented to the substrate, using their feathery legs (cirri) to capture plankton. They have four active swimming larval stages. 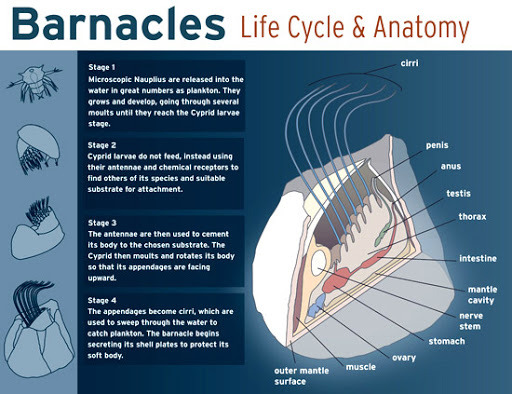 Free-living barnacles are attached to the substratum by cement glands that form the base of the first pair of antennae; in effect, the animal is fixed upside down by means of its forehead.

Since the intertidal zone periodically desiccates, barnacles are well adapted against water loss. Their calcite shells are impermeable, and they possess two plates which they can slide across their apertures when not feeding.

How could this crustacean be made into a large sea-creature? Given the limited food supply how large could it get?

I like my creatures grounded as it adds that sweet flavour of realism. Details about the necessary adaptations for gigantism and lifestyle are what I'm asking (for those who haven't caught on). They don't have to be crustaceans per se but I am attached to the overall barnacle form. Ideally they'd live near the shoreline to inspire myths and legends. 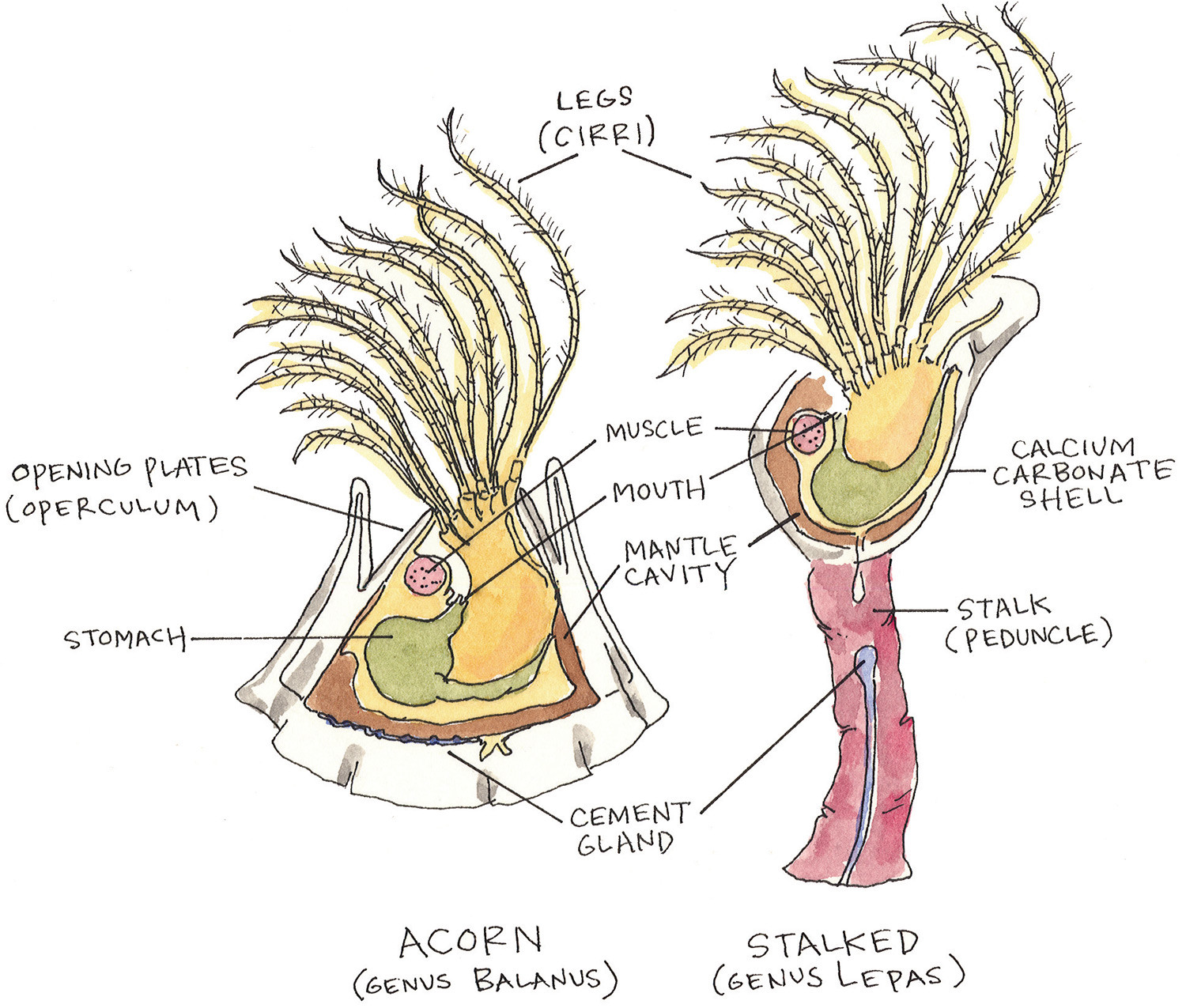 The barnacles are the only sessile members of crustacea, and the giant barnacle leverages the robust crustacean body plan to outcompete other sessile marine organisms with photosymbionts. As with other photosymbiotic marine organisms (sponges, clams, worms, cnidarians) the giant barnacle has photosymbionts in the tissues of its feeding cirri. It can extend these to become the size of a small tree, shading out other sessile organisms. Sometimes these green hairy arms float along the surface of the water.

The giant barnacle retains the ability to pull in its photosynthesizing cirri if there is bad weather or a predator capable of crunching through the armor of the cirri. They come in surprisingly fast and bring with anything that might be within them - other sessile organisms which have taken root on the arms, or mobile organisms not quick enough to flee the collapsing branches of the cirri. The withdrawal of one feeding structure can cause a chain reaction and huge stretches of these green tentacles suddenly vanish along with whatever was in and on them. Within the shell, the great barnacle still has a beak. It can eat.

The eating process of the great barnacle is sloppy and it is evolved that way. The big ones need protein but not carbon, the carbon being provided by their photosymbionts. Smaller, younger great barnacles living on the sides of their ancestors are more reliant on feeding as they grow and increase their surface area. Clouds of meat bits released by the old ones feed the young ones around them.

Like other large, hardbodied photosynthetic reef builders the great barnacles build reefs. Their robust, centennarian shells serve as the substrates for other organisms - although the towering cirri of the great barnacles give this ecosystem more the feeling of a shady kelp forest than a coral reef. A forest where the "trees" might suddenly get sucked down into a great maw and take you with them. Swim cautiously.

Look to sponges and corals:

Physically, something that doesn't move has a very different set of evolutionary pressures on it. You chief factors will be food supply, predation, and parasitism.

Exactly how big they can get is somewhat speculative. Based on the size of giant clams, they could easily get to 47 inches in body size (including shell). A sponge the size of a minivan was recently discovered, so this may be your upper practical limit of the completely sessile singular organism. If you start factoring in a large web-like fan, they may be able to spread quite a bit like a large coral. A coral (which is admittedly more of a colonial animal) has gotten to be 22 meters across and 8 meters tall, so it wouldn't be outrageous to have something this big (if it didn't need to move at all).

Given an unlimited supply of food, however, who knows? A barnacle that has developed a very specific niche at the mouth of a river may have a large constant food supply (assuming they tolerate the fresh water - barnacles as a rule can't, but they could evolve to do so). The anchoring behavior would allow it to sit in a strong current without constantly expending effort to stay stationary, and an endless flow of water would assist in having new non-stagnant water as a respiration source.

Creatures as big as humpback whales can feed on small food like krill, as long as it is available in sufficiently large amount.

However, considering that you want it fixed on the seafloor, it will not be able to go after its own food. This limit its habitat to area with constant, nutrient rich water current.

My gut feeling is that it could not get much more massive than few 10s of kg, and that those feeding appendices will have to develop some sort of deterrent against predation.

Food is the limiting factor, so we can see how we can improve this. First of all, we can check where nutrients go. Most of the nutrition is found along coastal waters. This is because the light can still reach most layers, while biological debris used as nutrients can't float out of reach. This seems most important. Maybe food can be gained on deeper floors where light doesn't reach and little life exists, as there's a large amount of accumulated debris of life. The problem is that the barnacle is sessile, so it needs a constant supply and not run out.

To both increase the food amount and prevent the food of running out, the barnacle needs to be in an underwater stream. That way more food passes the barnacle, reducing the problem it faces. If this can be done in a way that it could get as much food as a whale, it could conceivably grow as big (ignoring square cube laws and such). The problem is that it's unlikely many of such areas exist, if any. That means they are unlikely to evolve, as too little viable place is too far apart.

To get a more consistent huge barnacle, take the approach of bees and ants. The 'queen' barnacle acts as both the hive and queen. Worker barnacles go around collecting food from a large area. The worker barnacles can remove parasites, protect against predators and in general be sacrificed. If there's a good year, the queen barnacle sets reserves for itself and it's a signal to a few worker barnacles to change into queens, settling down as an attempt to reproduce. Much like queen ants and bees the queen barnacle can hibernate if the area knows times of shortages. It closes up as well as possible, letting the worker barnacles fend to themselves, protecting the queen from highly specific predators/parasites that can pierce the shell for as long as they're able.

The main barnacle can still get some food by itself. During (extreme) low tides it'll close off, seeming like a big rock.

The true size is hard to imagine. Each creature has an optimal size. Not requiring to move and the outer shell can aid in a much bigger size, but likely the creature is fully changed on the inside to sustain much bigger sizes. If both food and the internal structure have been taken care off, it doesn't seem like a stretch to have whale sized barnacles.

Start with the right scaffolding 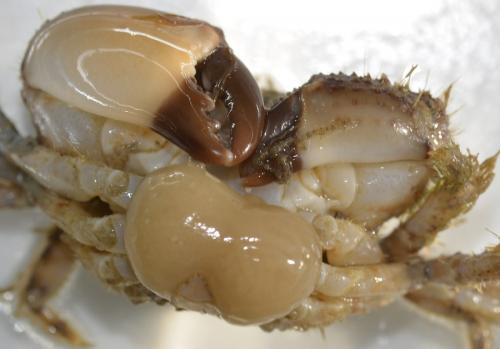 As illustrated in these images, barnacles such as Sacculina carcini can become parasites, creating new structures within a crab host. Your barnacles were adapted by bioweapons specialists to present appropriate HLA antigens and signals such as OX40 to suppress the human immune system. Infected swimmers become reclusive, avoiding quarantine checks, as the barnacle colonizes their skin in gill structures while parasitic dendrils inside the body absorb and replace unnecessary structures such as the neocortex and most reproductive structures. After some modification the swimmers are drawn instinctively, or perhaps by the last of their memories, to the soothing roar of the waves. The barnacles form a massive reproductive structure that is fertilized at a microscopic level in the ocean; after this the hosts will wander the ocean for some time, drawing on stored food reserves as they continually release new larvae. In cases where the density of quorum-sensing hormonal signals is particularly high, the barnacles may anchor their host to a holdfast (thereby becoming sessile per the question). These individuals become specialized to release large numbers of male gametes to improve their overall reproductive success.

Of course, these are not the largest barnacles on record - that distinction is disputed by several later variants that targeted marine mammals.

14
Evolution of the Giant-Eye creatures
1
Paleozoic marine creatures are now in contemporary sea. What will happen?
10
How large could my sea serpents be?
2
How would giant penguins affect the arctic/Antarctic ecosystem?
10
What attributes and how big would a sea creature(s) need to be to tow a ship?
3
How large could sea creatures grow on a terraformed Ganymede?
2
How and why would the sea-scorpion wound those who hold it?
1
Could whale-sized creatures propel themselves through the sea by expelling water like a cephalopod?