A new and dangerous ALF has been discovered in one of the generation ships. This creature has been christened a Gargoyle, as its body resembles a rock and its hunting strategy is usually 'stay still until prey gets within attack range.'

The first one discovered resembled a large rock, with a concave top. The scholar who found it commented that it vaguely resembled a frog, and that its "mouth" looked surprisingly realistic, then walked up and touched the mouth. To our surprise, the rock shifted, its "fake" maw clamping shut upon the unfortunate scholar's arm, the vague appendages on the "rock" popping out or extending.

Needless to say, the scholar died, but we did manage to kill and dissect the creature. This alien had robust musculature and ample blubber, most likely to aid in locomotion and enable the predator to survive between long stretches without prey. Its body exhibited a mix of retractable and "slotting"* appendages, most likely so said appendages don't deviate from its rocklike profile when it's waiting for prey.

Additionally, its rocklike skin appears to be the result of an unusual biological mechanism; the skin demonstrated layers of increasingly mineralized tissue, showing that as the creature ages, it develops more and more skin cells, resulting in broader and broader layers of skin. We are unsure how, but these outer layers seem to be petrified.

My question is, is my Gargoyle a plausible life-form? Camouflaging predators are nothing new here on Earth, so I know that's plausible. However, appendages that can disappear into the body, or fit into special grooves to appear as projections of rock instead of limbs, are most definitely an unusual trait, as are this life-form growing layers of skin that turn to rock. I'm not entirely sure how that could work, either...perhaps its skin could form plates of rock, fitted together, and force new growths of rock in place from below? Or it could 'molt,' shedding and eating its rocky armor, then regrowing it to cover its now-larger body?

So more specifically, how can I plausibly explain these alien traits?

Let's begin with the retracting bit: surprisingly enough it's not that weird, most turtle species can at least partially retract both their heads and their limbs into their bodies. Some kinds of whales make themselves more hydrodynamic thanks to the presence of literal fin pockets used to tuck their fins inside and make them even more torpedo-like. Creatures with a lot of blubber also can have the appearance of retracting something into their bodies, see for example this seal: 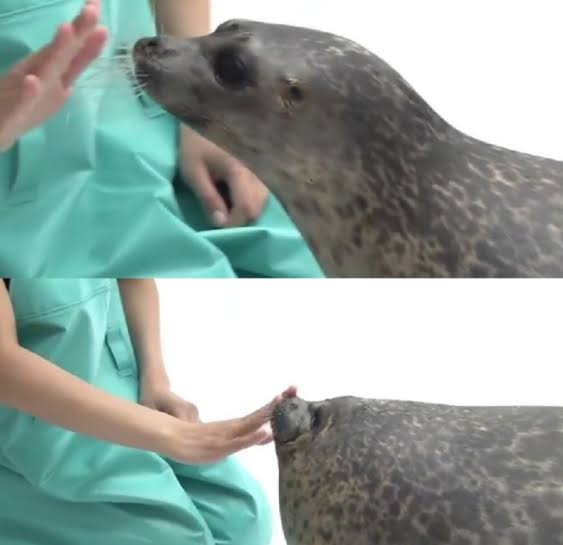 Thanks to the layer of blubber and flexible enough neck, it passes the idea of retracting its head into its body. Since your creature also seems to have an extensive amount of blubber, I'd say it's easily possible. If it truly has a lot of blubber, hiding limbs that overall come out from below itself is as easy as lying down with its legs tucked in (if you have seen a cat lying down, you know what I mean), the presence of skin pockets further ensures the limbs will probably be hidden away well.

But what about the mineralized skin? Again, not crazy, our very cells are actually calcified when it comes to the most further out layers of dead skin. This already creates, in land animals, a barrier that helps prevent water loss (since it's impermeable) and offers protection from bacteria in the environment (layer of calcified dead cells). Your creature just takes it a norther level. My biggest concern is in regards to the "layers of increasingly mineralized tissue, showing that as the creature ages, it develops more and more skin cells, resulting in broader and broader layers of skin" part. Sure, it's not crazy than an adult would need and therefore have tougher skin than a younger one, but again it's not too crazy. Some spiders slowly incorporate bits of iron to their chelicerae throughout their lives, so that those can better pierce the chitinous exoskeleton of its prey, and some older spiders seemingly had fangs mostly composed of metal. The problem with that is that for something to incorporate more and more mineral components, it needs to stick around, A.K.A your animal would need to not change its skin from time to time like normal earth creatures, which can cause some problems depending on how they work (dead skin doesn't heal, so if it's not changed periodically to make up for that, it can Mean a permanent access to the very living parts of the creature's flesh below.

We can however make a different approach: rather than giving it skin that becomes more and more mineralized, we give it chainmail armor: 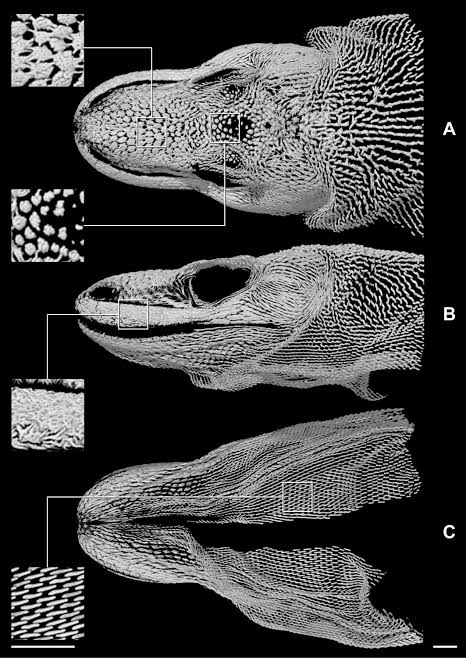 This picture should illustrate my proposal well: komodo dragons are a species of fairly aggressive reptiles, one which, at their adult stage, only needs to worry about other komodo dragons. It's solution to protect itself? A complex system of osteoderms that cover a such portion of its body you can easily tell what its skin is like. This protective system of tiny bones, unlike the outer skin layers, is never thrown out and stays within the body until it dies. If your creature was to have a similar system of osteoderms, not only would it still be protected, it'd make a lot easier to explain the mineralization, as much like the spider's fangs, these tiny bones slowly get more and more molecules of minerals and potentially even metals integrated to them, explaining that the thicker mineralized "skin layer" was nothing more Nothing less than a literal organic chainmail protecting the creature.

Edit: Alternatively. If you really want to crank that armor concept to eleven, then instead of following the komodo armor strategy, you might want to follow that of the kwi kwi, also known as the armored catfish: 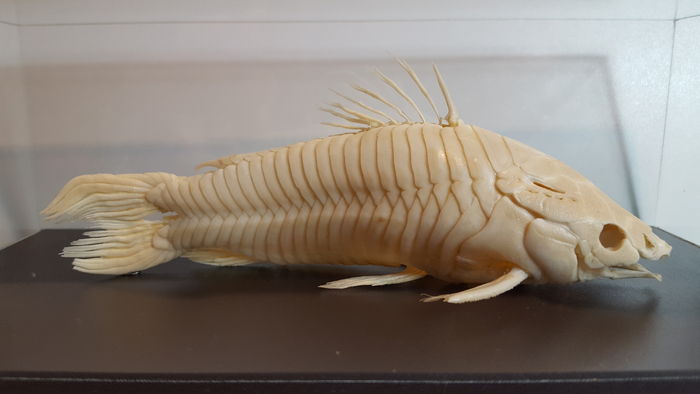 The little fella who decided they wanted to exist wearing brigandine armor.

Do be warned though: a drawback of brigandine armor that exists for anything that uses it, even if it's part of your skeleton, is that, while not as much as full plate would, it will most likely still limit your mobility to an extent (but certainly not as much as regular media would tell you), and having it as your skeleton, especially if you slowly integrate other minerals into it, might make your creature pretty heavy and less "squishy", meaning balancing this one with osteoderms might be ideal to prevent an unwanted loss of flexibility In certain areas, particularly the limbs and potentially in the neck region.

So overall, it's pretty plausible. The creature's ability to tuck its limbs in to camouflage already exists in nature, and the layer of blubber only helps with that. The mineralized skin part is a bit trickier, but I'd say that a system of osteoderms below the already mineralized skin (nothing really stops your creature to have thicker skin, see rhinos and hippos for example, although that probably comes at the cost of the skin becoming a bit less flexible) can still somewhat explain it nicely enough, particularly if you decided to also use an actual system of bony plates like the armored catfish, because then it will also have a system of literal bony plates throughout its body. 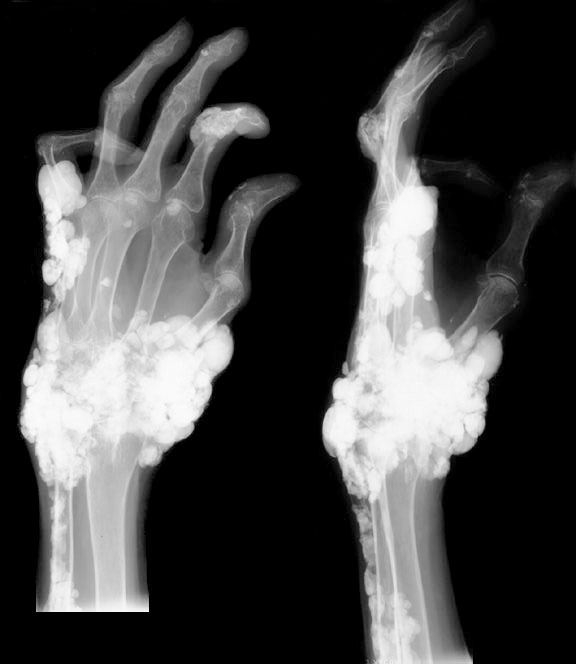 Tumoral calcinosis is a rare, weird entity of unknown etiology. Fifty percent of these patients may have some associated abnormalities in their renal lab work. The calcifications are usually large, globular, and located in the soft tissues over joints. Not much else looks like this.

Your gargoyle has extensive calcific deposits in the skin, some including the cutis. Lichens grow on these, adding to the rock like appearance.

The skin itself is exorbitantly redundant and wrinkly. 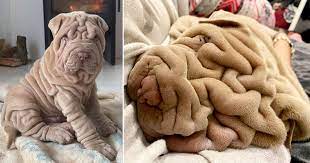 I am not even sure what we are looking at in that second picture. Your creature has folds and lobes of redundant tissue which break up the animal-like lines in its form. Its limbs do not disappear into grooves but into redundant folds.

Not the answer you're looking for? Browse other questions tagged biology creature-design aliens .