If everyone had to wear a box over their head - how would society differ?

A crazy dictator (let's face it, most of them are) decrees that all of his subjects must wear a box over their head when outside their homes. 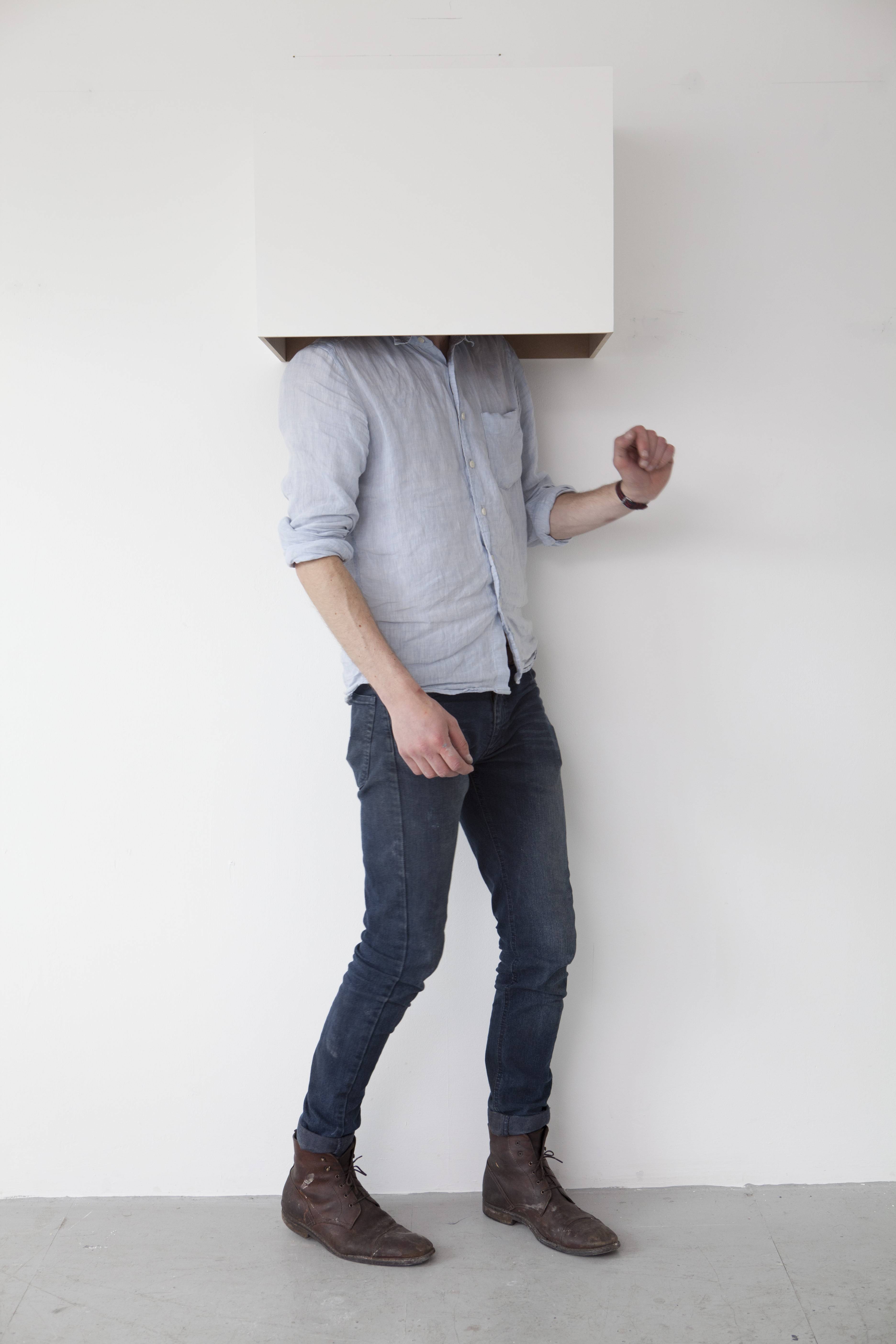 There are no eyeholes allowed and the police (who are exempted whilst on duty) check at regular intervals. The boxes are of a standard size and have to be worn level as shown in the photo. They are sold with special internal headgear that ensures this.

People can see a limited amount of the ground, so signposts etc. are painted on the floor. People never see the faces of anyone they have never met at home. There are some illegal establishments that have mirrors on the floor but the penalties for attending these are very severe. Mirrors are banned in all public places.

The dictator is very repressive. He has now banned all cameras of any kind unless they are government approved and used by the national newspaper or the national broadcasting system. Of course there may be a black market in cameras.

The internet is heavily censored but it exists and tech-savvy people can view non-box and pre-box material. This is not approved but very difficult to prevent. Just don't be caught with any of it on your hard-disk. Because cameras are illegal it is very difficult and risky to make video material of any kind.

How would this restriction affect:

How would this restriction affect:

Dating - calves and ankles would (legs in general) would become much more noticed and noticeable. Even men would pay attention to what shoes they wear.

Sports - Hockey, floor hockey and racing (running) would be about all you could do, and they would all need to be televised so people can watch them from home.

Entertainment - movies would be boring unless pre-box movies are allowed. And can people film themselves at home without their box? what about internet cams? If internet cams are available, then a lot of dating will happen this way!

Crime - In many ways this will make it much easier. say I'm a pickpocket, I get a little mirror that can 'look' below the rim of my box. Even giving me 10 foot extra view is a huge advantage. (or have 'one way' holes in the box). First spot the cops, likely won't need many for long since it's pretty easy to see who's complying. Then pick a pocket and run. With boxes it makes it VERY hard to identify anyone for a crime. "THAT ONE WITH THE BOX LIFTED A CASE OF MOUNTAIN DEW". It would also be hard to spot, thieves. A camera would have to be watching the store and someone watching the live video.

Actually, I would buy pinhole cameras and have them in all four corners with a little screen for viewing... ;)

So this box is unusual enough that its effects are best seen not by looking at the box, but how it affects the senses, and how we adapt to them.

The effect on hearing is more subtle. You'd be astonished at just how much information our brain processes out of the sound waves reaching our ears. For example, did you know you can tell if something is above or below you, simply by whether you hear the characteristics of echos off your own shoulders?

The box is a horridly designed structure for this sort of advanced auditory processing, so it seems like a likely place to make modifications first. Inside the box, we would start to see custom shaped inserts which give a more organic shape to the inside of the box and get rid of all those horrible boxy echos. Eventually people would get the hang of making them in a way that mimics how the peaks and valleys of the human ear works, giving us a remarkable amount of directional information. I would also expect some clever hijacking of muscles (perhaps the muscles that wiggle the ears) to control the size and focus of the opening. Wiggle your ears up, and the inserts may open up to let you hear smaller sounds better!

The sense of touch would become far more important, because each person's world would get smaller. The things that matter in the world would always be close into you. If a friend was across the road, you might not even know it unless you recognized their footfalls!

The single most monumental change would be the inability to see someone's face as you talk to them. The amount of emotional information conveyed in the face is staggering. Society, however, is not one to give up the good fight. We would develop new ways to convey that emotional bond. Touch is a powerful medium, so we may see it become proper etiquette to touch hands while talking to someone. Kissing the Papal ring is a ritual in our age, but that opportunity to touch the papal hand would actually be incredibly meaningful in this society.

Of course, talking would be less popular. With the inability to see who can evesdrop, broadcasting communications like that are risky. Every individual would know some sort of sign language which can be used between two people (or perhaps even more). This would double as an excellent way to convey emotions with the hands.

Dating We would find ways to be "shallow." The ability to show beauty at the skin depth will not be lost simply because we don't have eyes. Careful care of hands would replace careful care of the face. Physical contact would be a lot more important in dating. Whether that makes dating deeper or more shallow is really up to you.

Sports Sports would consist mostly of tasks which could be observed by touch or very short range sight. I would expect strength games like tug of war would be very popular. I would expect not to see very much in the way of speed games. A lack of visual capability means its much more dangerous to go quickly, so it won't be valued as high.

Entertainment Group entertainment would have to be auditory, so singing would be a major form of entertainment. People would also likely dance, given the tactile feedback one gets from dance. Obviously there would not be anything like movies.

One thing which would have interesting changes is magic. I'd expect close-quarters magic to be a major pastime because it is almost perfectly selected for by boxing everyone's head.

Your instinct was that crime would go down. However, I disagree. I think crime would skyrocket. One of the primary tools our society has in place to deal with crime is the justice system. Justice depends on identification, and the box removes virtually all methods of reliable identification. Heightened hearing might help, but I would expect drive by muggings to be a major problem with little to no response possible.

Not the answer you're looking for? Browse other questions tagged society humans culture government or ask your own question.

14
How would society be different if humans possesed natural fur covering?
11
How would human society develop if humans had gills?
18
How could a society that emphasises spirit of a law over loopholes develop a legal system
11
If everyone was cloned and the clones were a foot tall, how would the American government react?
19
How would human anatomy differ if humans almost always had 2-4 children at a time?