How would a bow for super-humans use look like?

First, I shall explain the situation.

I have a species of humanoids, Astriads, who are already quite stronger on average than humans are. However, this difference isn't great enough to cause problems when it comes to weapon design.

Now the problem comes with the internal magic. Using the internal magic, they can greatly empower themselves. While this isn't that practical for waving heavy weapons around, for archery, this is quite a problem. Where as, say, elite English longbowman would use 140-200 lbs force bow, and according to some stories, 240 lbs bows have been used in some archery competitions worldwide, elite longbowmen with internal magic can easily generate pull force far greater, from 400 pounds up to 800 pounds of pull force, depending on how good these elites are when it comes to internal magic.

My trouble is this: How would they design their bows in order to maximise the impact of increased strength? For example: So far as I understand it(and I might be wrong), if they just went for a thicker longbow, they would not achieve much improvement over 200 lbs bows because of limits of material. So what sort of bow (without use of modern materials) do they develop to properly use most of their magically enhanced strength to their benefits? 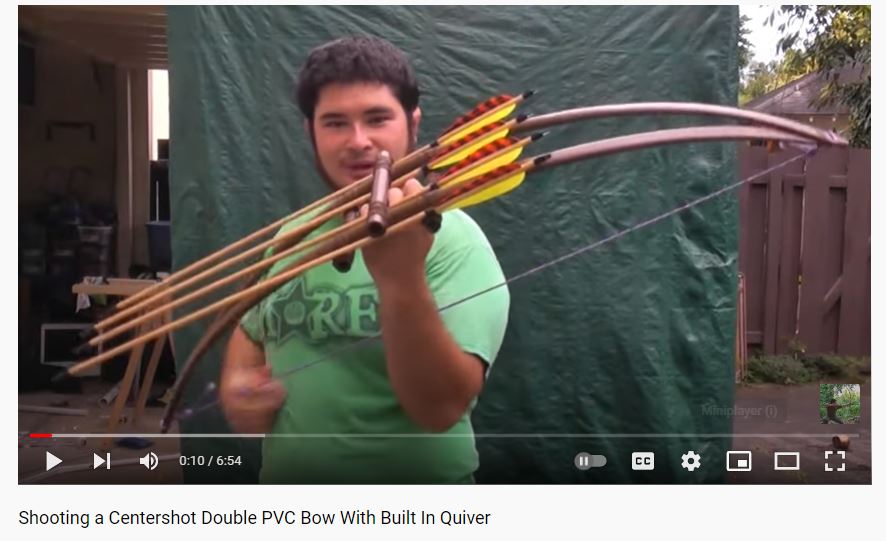 This dude is an Astriad! You can tell. And besides his might, he is a maker of awesome things and so himself magnitudes more awesome. He has made an awesome double bow with double the pull of a single bow. Thus he can leverage his magestic mightytude without requiring any unobtanium.

"But!" you sputter wetly. "But what if my people are even mightier than this bowsmith dude!". Even he would admit it might be possible, because his true might is the making of awesome things. Bowsmith dude would make the mightier dude a 3 bow bow and let mightier dude test it out in a video.

"But they are really mighty!" you retort. "Too mighty for a 3 bow bow!". One can add bows in proportion to might until the bow is an adequate match.

Throughout the middle ages in Europe there were thousands of battles. Bows were useful in only two of them, both won by the british, and this has made the longbow a sort of mythical status as a medieval uber-weapon in the english-speacken world, just like the absurd glorification of the katana as a superior sword, or the fascination about nazi super-soldiers and super-weapons.

Bows are tools for hunting. They are good to hunt small game from short to medium distances. That's what they are good for. In battle they are next to useless, unless a certain combination of tactics and opportunity concurs.

There's a tendency in fantasy novels and visual media (movies, videogames) to depict bows as the medieval rifle - or even submachine-gun - which is another misconception. Bows were used in battle, when they were used at all, as a primitive form of field artillery. French knights could drank their wine unconcerned by a heavy rain of arrows, but medieval infantry was nothing but peasants armed with forks. Less than one of every ten of them had a shield, less than one of fifty had a sword and absolutely no-one carried any kind of armor. As a result, when in Agincourt or Crézy the welsh bowmen started shooting arrows, they were aiming to the mass of infantry downhill, not to the knights.

Because that's a problem with bows, no matter how powerful or far-reaching: the best bowmen could hit a static human-sized target at a hundred paces 50% of times. What they did was aiming at whole armies, with hundreds at a time. It was carpet-bombing, not sniping.

So the french commanders had three options: retreating from the field, allow their infantry to be massacred until they routed or charge to eliminate the bowmen threat. So they decided to charge uphill against a heavily fortified position. It was pikes, tramps and trenches who defeated the french cavalry. Clever use of the bowmen may have decided those battles, but no knight was ever killed by an arrow.

Bows can be deadly weapons when used like the tribes of the steppe used them. Their bows were far superior to welsh longbows: they required less force to draw, offered comparable strength and reach, where easier to aim and, specially, could be used on horse. By loosing arrows while on the run upon a horse, mongols, huns, scitians and many other peoples of the steppes could run close to their target - otherwise, no matter how powerful the bow, you're gonna miss -, aim carefully avoiding armor and shields, injure the enemy (rarely killing) and run away unscathed.

Even then, bows were used in a war of attrition, forcing the enemy to charge and chase the mounted archers to ambush them and finish them with swords.

So, you want a superweapon for your insanely strong race of supermen? That's easy: a warhammer. If you want a ranged one, a javelin. Optionally with an atlatl for greater reach.

Since your goal is to maximize power, let's think big, increase the weight of the arrows through both size and material so that it could hardly be considered as regular bow ammunitions, and use the power of ballistas to throw them at the enemy.

Ballistas are normally siege weapons, rarely used in field battles. This is notably due to the fact that you needed several crew to man it properly along regular maintenance, for a slow rate of fire (comparatively to bows).

However, with someone with quadrupled strength, you only need one person to reload and shoot, something which would be done much faster and with much less efforts, leading to really strong shots further away, with very high probably chance of killing anything at the point of impact.

Unfortunately, field repairs will be inevitable, but at this level of strength, most kind of mono-string bows1 will need repairs anyway. Indeed, even if they do not break, the components will probably irreversibly bend at the point the draw force is exerted. To counteract this, the ballista could be manned by teams of two mages, alternating between reloading and aiming/repairing as one needs to restore their magic.

Alternatively, miniature-ballistas could be made, something between normal ones and crossbows/bows. They could be set on a foot for the same purpose you lay down heavy-machine-gun, ensuring stability while you manipulate them. It's making them more of a one fighter weapon, where it reduces the maintenance needed through slightly reduced power output. At the same time, you can aim and reload without moving out of your position and for longer periods of time (it's easier on the muscles). Finally, miniature-ballistas would be much easier to manipulate without springs if you don't wish to reload them in the manner of a crossbow.

1 : Of course, if you favor damage bursts and multitargeting over raw destructive strength, multishot bows should probably be your favorite choice. Just don't forget that these kinds of apparel are not really much faster on the long term, as the reloading is often more complex and mostly improve how many times you have to shoot per ammo, which is not the lengthiest part when shooting quick.

Your super archers would use a bow with higher draw weight. What you want is pretty much a bow part of a crossbow, just without frame. Alternatively, you may get crossbows with even higher draw strength.

How would you get that draw strength? If those people are taller than human, they may use slightly longer straight bows, as that will give them a bit more force. But a better option would be to make composite bows. A composite bow is a bow made from different materials glued together so it can have as much draw strength as needed, what's more, they can be finely tuned to the user's strength. Composite bow was traditionally made from wood with pieces of sniew and horn. Horn parts were placed where compressive forces affected the bow and sinew allover but mostly in places where stretching forces applied. Composite bows had one massive drawback - glues used were relatively easily dissolved in damp conditions, so they need to be protected from moisture and could even fall apart in very damp areas.

Fun fact: good quality welsh longbows were in fact natural composites - they were cut from the area of yew where heartwood and sapwood meet. One of those is resistant to compression and the other to stretch, same principle as in glued composite bows.

Composite bows may be straight bow (ancient Egyptians used those), more efficient recurve bow or even reflex bow. The latter types are more efficient because they can store the same amount of energy in a much shorter frame, making it easier to handle and more useful on horseback. Also, skilled bow maker can fine tune the energy store and release curve in those bows.

The other alternative would be to use metal bow. It was used already for high draw medieval crossbows and may be useful for the strongest of your people.

Use magic to create the bow

Suppose you know how much force your super human archer can apply. Then design the appropriate light weight, proper sized material using this,

.. and ask your Magus to create a good stick of that material, and.. a string (chord) of some magic substance that is able to hold the pull and force of the bow.. then, materialize solid steel arrows, and you'll have a nice long range !

A telescope visor would come in handy.

Not the answer you're looking for? Browse other questions tagged magic weapons archery .

11
If a person's strength weren't a problem, what would bows be made of?
26
A more powerful bow
2
How effective are bows when used by a race with superior strength? (numerically)

9
What would medieval battles look like if humans had fully prehensile tails?
14
What would out-of-water warfare look like for underwater people?
10
How much of an advantage in medieval-style combat would it be to have four arms with pivoting shoulders?
8
Could a mass-proportional physical speed limit on projectiles "nerf" guns but not ruin archery?
1
Age of Sail warships with magic flamethrowers
1
Naval cannons vs ships made of magic wood
3
What would the fighting style of someone wielding a longsword-like arm blade look like?
8
What would a hammer designed for throwing look like?