How would the anatomy of a bird that flies with its legs work?

I'm designing fauna for my story and I'd like to incorporate birds but with a twist! Instead of having wings adapted for flight their legs serve that purpose. Ordinary birds have most their muscle mass dedicated to flight which is good but leaves them very literally chicken legged. Flightless birds on the other hand have their muscle mass reallocated to their legs but as a result their wings become vestigial. So the idea is that a bird with wing-like legs would have all of its primary muscle mass useful for running and flying. Two birds with one stone (excuse the puns). This is similar to the quetzalcoatlus which is theorised to push off the ground with its wings to take off. Also similar to the sharovipteryx a lizard that glides with its hind legs.

The bird is somewhat ostrich-shaped with two strong legs with a special toe which houses the alula. This third toe is bent upward while walking so that the feathers don't drag on the ground. It's wings are either repurposed to be talons like those of eagles to catch prey while in flight, or simply reduced to vestigial limbs to make their figure more aerodynamic.

This sounds great but as always with biomechanics it's quite complicated to pull off. The entire pelvic area will be significantly different to allow powered flight, I have trouble imagining how it would work. There's also the fact that muscles for flight would be different from those for walking. Lastly a possible balance problem while in flight, how might the birds position themselves to pull this off?

Why do this? Because leg day is important.

Let us consider aquatic propulsion. Cetaceans and manatees have a long tail which propels them by moving up and down in the vertical plane. Humans can simulate this propulsion by holding the legs together and moving in a vertical plane similar to a dolphin tail.

Birds like cetaceans and humans are descended from land animals and like them have a spine adapted for land. An avian spine will flex vertically.

You have mandated that the bird has legs for land use. I propose that in the air it will flex and extend these legs (and associated wings) in a manner like a butterfly kick or a dolphin tail. The legs will splay in a letter Y with the large single wing between. The tail will also be used to steer and for balance.

On the ground this creature will not run like an ostrich because the wing extends between the legs. It will hop, mightily. Birds have a long track record of successfully getting around by hopping. The mighty hop will also get the bird clear of the ground so it can spread its wing and continue on.

The bird can also travel on all 4 limbs when slower or more measured movement is needed. The forelimbs are not needed for flight. They are grasping limbs like the foot of a parrot and used for arboreal movement. The forelimbs are also used to grab prey out of the air or off the ground in the way hawks and owls use their feet. The bird can hold prey and dispatch it with its beak, and then eat while in flight.

I imagine it will look something on this line, with the flat of their feet retracted at tips of the wings.

Or with the tights acting as the flying surface and the (long and thin) calves bent back towards the body, the knees being the tips of the wing.

Note that a Forward swept wing is unstable under stall conditions, and such a flight regime it's a very energy consuming one, albeit quite maneuverable.

Not likely to like perches and branches as a landing spot, the mix of "landing gear and wing" makes it difficult. Maybe plains or mountains with ledges as a habitat. Same args would lead against a seed-based diet. With a little bit of care, one may think of water birds, a supple torso, long neck and beak may be adapted on the frame without damaging the aerodynamics.

If the flight is used for hunting, it relies on speed and maneuverability, short flights (no soaring like an eagle), plenty of food around. Either:

One think I'm sure about: I'd hate to be an egg in a belly with such strong muscles that are used for flight and as a shield against accidental impacts on landing.

(as taken from the Guardian) 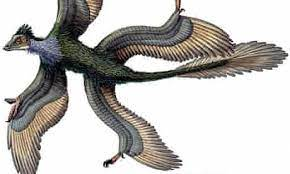 There have been lots of fossil finds the past few years and quite a few species identified.

Not the answer you're looking for? Browse other questions tagged creature-design anatomy flight avian .

9
How do the eggs of birds that fly using their legs not crack?

13
Planet of the Aves: Quadrabirds
11
Could you make Bat wings shaped like the different kinds of Bird wings?
8
Are my wing-walking griffins viable?
4
Adapting ostrich legs for climbing
6
Unique take-off strategies for six-limbed creatures?
4
Humanoids with wings, how do they take off?
8
Naming the "hand" of a humanoid bird
2
How two-limbed creatures could evolve powered flight? ("wingless" bird)
2
How large of a feather "parachute" would these flightless birds need to fall safely?
9
How do the eggs of birds that fly using their legs not crack?