What kind of air currents would be made in and around reverse-gravity bubble fields?

Bubbling up some ideas

Last night, one thought plopped one after another in my mind, and one of them was about adding local space anomalies which reverse the force applied through gravity. They're literally static bubbles : They are spherical, don't move relative to the world nor grow or shrink over any meaningful time. Their size ranges from as little as 20cm to 30m in radius, although most are around 1 to 4m in radius.

Because I lack complex physics knowledge and because I want simple things, the way I imagine they work is to simply add a coefficient to the Newtonian gravity equation. This coefficient ranges from 1 (outside the bubble, normal gravity) to -1 (at the bubble's center, reversed gravity). There is a smooth, linear gradation at the borders which roughly goes to 0 after 15-20cm inside the bubble and -1 at double the distance, so ~40cm. The borders' size are not relative to the bubble's own size. 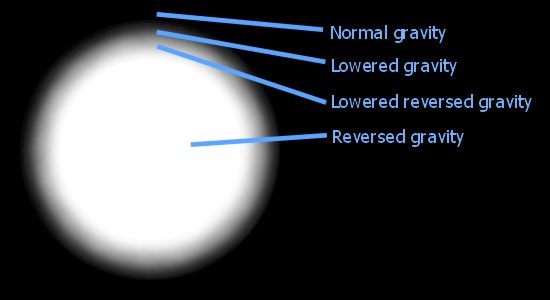 A rough 2D cut of the bubble's force field, where white is reversed-gravity and black is normal gravity. Grey is anything in-between.

So what can you expect from this?

For objects "left" on the borders (ie. dropped without giving force) :

The movement of anything solid inside the bubble is quite easy to figure out (I could actually make a simulation of it like I did there) : Things inside move "up", things outside move "down". The weirdest thing that could happen is at the borders, where -as far as my thinking can go- objects left not exactly on the bubble's top will tend to spin along the round surface, as the forces are not uniformly spread on the volume. Think like you slide a cylinder between your fingers, sort of.

That is, everything above is conceptualized in a vacuum environment, as I happen to also have vacuum in my fluid dynamics lessons. If you left a tennis ball here or there, it would probably be affected by air currents too and move another way. That is, if there are any airflows o_x.

So I wish to know what would happen to air inside and in direct proximity to these bubbles? Would air currents be created spontaneously, and if so, what direction would they take and what speed would they roughly have?

In other words, should I expect some fresh cool winds or stormy, very strong ones, if at all? Would they go upward then downward around the bubble, or maybe something else? Would this affect only large sized-bubbles? This is the kind of thing I'm currently wondering about.

I'm aiming this for a classic Earth-like world. I'd like first and foremost to know what would happen in windless environments, as it'd give a much better understanding of the system. But if by chance you happen to have a glimpse of what would happen in a real context with some wind, It'd be interesting too :).

The main effect with regard to air currents in and around the reverse gravity bubbles would be due to the difference in pressure gradients inside and outside the bubbles.

At sea-level there is an approximate pressure gradient of -10 Pa/m (i.e. pressure drops as you rise in altitude), and inside the bubble (ignoring the transition zone between normal and reverse gravity) this gradient would be reversed (i.e. atmospheric pressure inside teh bubble would increase slightly as you rise in altitude). For a 4 m diameter bubble, the upper part of the bubble would have an excess pressure of ~40 Pa compared to the air outside the bubble, and at the bottom surface of the bubble there would be a similar pressure deficit. As a result, air would be forced in through the bottom and would be expelled at the top (a wonderful example of perpetual motion that often accompanies anti-gravity models).

40 Pa is not a lot (about 0.04% of atmospheric pressure), but it would be sufficient for quite significant 'convection' currents to develop. Approximating each of the transition zones at the top and bottom of the 4 m diameter bubble as a vent of diameter 2 m, 1 m in length (to allow for the transition from +ve to -ve gravity), with a pressure difference of 40 Pa, then greatly abusing an airflow model beyond anything it was reasonably designed to calculate, suggests that this would introduce an upward oriented 'draught' with wind velocity of the order of 10-20 m/s (about 35-70 kmph). That is a fairly stiff breeze.

If you have a force field active in the volume, whose effect depends on the mass present in that volume, you can have buoyancy forces by changing the relative density of the matter in that volume.

The buoyancy forces will then produce currents, with effects proportional to their magnitude.

Nothing much different than the old story on hot and less dense air going up and being replaced by cold and more dense air, with the warning label that wherever "up" is is determined by the local field.

Again, the magnitude of the buoyancy forces will determine the strength of the currents. The bigger the difference in density, the bigger the induced currents.

It's easier to intuitively visualize the behavior if you switch to a potential diagram. The potential of a point is defined as "what energy do I need to bring a particle with one unit of (mass, charge, whatever interacts with the field) from infinity to the point of interest" (in math formalism, force integrated over distance from infinity to the position)

For you gravitational bubble with a radial distribution, it looks something like this: 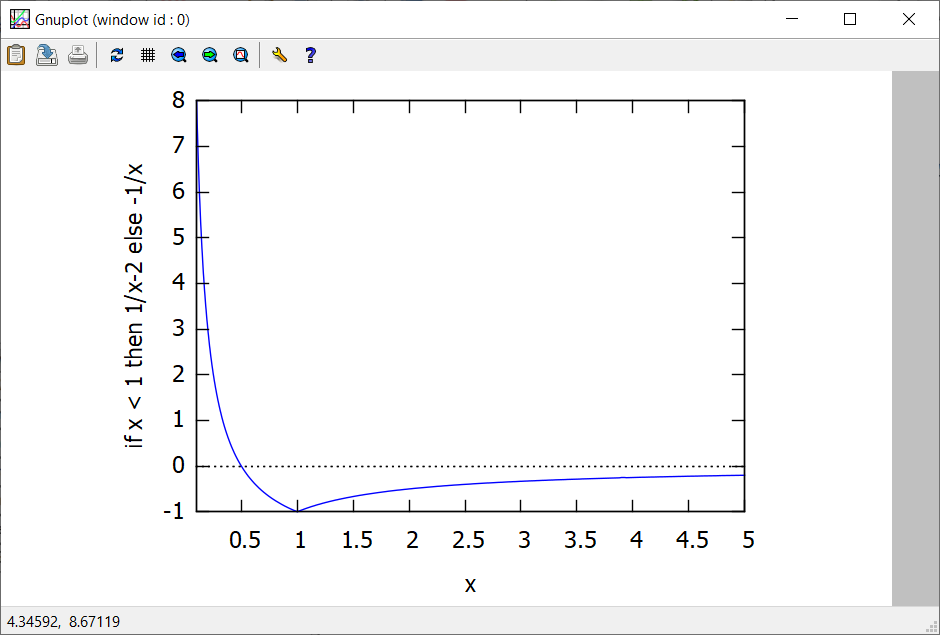 Now, release some gas around it.

Tactile, trying to grab it, it will be like squishing a ball of nothing that becomes tougher the harder you squish (not unlike a compressed rubber, except that the resistance to deformation increases faster than linear). If follows that the ball will levitate on top of a table (when placed into the gravitational field of a planet) at whatever distance the repulsive potential energy inside the bubble equals the attractive potential energy of the planet acting on the bubble as a whole.

Visually, classic Newton interpretation, gravity does not influence light, so you'll see a "nothing to see there". Einstein GR, gravity is a curvature of space, you'll get a divergent gravitational lens in your hand.

Oscillation of air on the boundary

opening: "Their size ranges from as little as 20cm to 30m in radius, although most are around 1 to 4m in radius."

I don't think it would relevantly affect its outside, at this size. When the field is modulated in some way, air could move (oscillate) around the boundary and generate a sound. Of course, in a vacuum, that sound would not be audible.

In a small scale situation, as presented in the opening, enough reverse gravity inside the sphere would cause material and gasses inside to move outward, slowly, quickly, explosively, depending on the strength of the field. It will leave a vacuum inside, or low pressure situation. This would attract gasses again, causing the oscillation. But this traveling back is not caused by gravity. Outside the object, any gravitational effect would be near zero, as a result of the small size and weight of the object. Escape velocity from this object would be zero. The only reason gases will tend to move inward is pressure difference. Air flows back, until it is forced out again.

When this field would be half the size of a solar system, the mass inside would become relevant, and matter outside the field would be drawn toward it, or orbit around it. Meanwhile, all matter inside would emigrate outward. The sun will be torn apart. Oscillation at the boundary will happen, but eventually, lots of matter would get concentrated into a certain region at the boundary. When parameters are tuned accurately, the field could form a natural Dyson Sphere.

Not the answer you're looking for? Browse other questions tagged physics gravity air or ask your own question.

20
Oscillating orbit: how to produce one in the real world?
5
How do you commute in a sphere where gravity goes the wrong way?
9
What would be the structural impact of an oscillating orbit on a planet?
12
Delta-v budgets and modified gravity

16
Is it possible to have a logically consistent world where F=mv instead of F=ma?
7
Is the Alcubierre Drive relatively free from relativistic collisions?
3
Acceleration insulation: I can build the Moon cannon, now what?
9
Infinite tube world
10
What would a hard boundary mean in physics on the quantum-mechanical level?
8
Magic: Reality check of effects of mass-altering magic
4
Dimensions of an O'Neill cylinder with gravity and coriolis force like surface of Earth
13
Would skyscrapers tip over if people fell sideways?
3
Ultimate fate of someone falling out of a skyscraper in warped gravity
2
Defining specific physics for a fictional element (or substance) used for airship lift