How would you design a race of small humanoids such that they could ride a Quetzalcoatlus?

I would like to know whether it would be possible for a sufficiently small humanoid to ride a Quetzalcoatlus, a species of pterosaur alive during the late Cretaceous. Plausible adaptations to the creatures themselves could be made, as I am not trying to directly copy Quetzalcoatlus bit by bit. 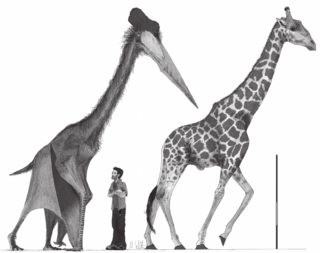 I want answers to consider how small would the humanoids have to be. Additionally, I believe there are other factors to consider other than weight when creating a rideable creature. Would a small humanoid on top of the quetzalcoatlus be detrimental to its balance?. Would it be able to fly while carrying the humanoid?

Insects were too small to consider. I think that the flying methods of reptiles, mammals, and birds are different, and have different strengths and weaknesses.

If you consider what percentages of their body weights present day bats and birds can carry in their mouths/beaks or rear claws, you could assume that a specific extinct flying animal like a Quetzelcoatlus could carry the same percentage of its body weight. Of course a rider weould probbly ride in some harness on the flying creatures back which might affect the weight it could carry.

More recent estimates based on greater knowledge of azhdarchid proportions place its wingspan at 10–11 m (33–36 ft).2 Remains found in Texas in 1971 indicate that this reptile had a minimum wingspan of about 11 m (36 ft).3 Generalized height in a bipedal stance, based on its wingspan, would have been at least 3 m (9.8 ft) high at the shoulder.4

Weight estimates for giant azhdarchids are extremely problematic because no existing species share a similar size or body plan, and in consequence, published results vary widely.4 Generalized weight, based on some studies that have historically found extremely low weight estimates for Quetzalcoatlus, was as low as 70 kg (150 lb) for a 10 m (32 ft 10 in) individual. A majority of estimates published since the 2000s have been substantially higher, around 200–250 kg (440–550 lb).11

So a 70 kilogram or 150 pound Quetzelcoatlus would have to carry an additional 100 percent of their body weight to be able to carry an adult male human of similar weight.

A 200 kilogram or 440 pound Quetzelcoatlus would have to carry an additional 34.0909 percent of their body weight to be able to carry an adult male human of about 150 pounds.

A 250 kilogram or 550 pound Quetzelcoatlus would have to carry an additional 27.2727 percent of their body weight to be able to carry an adult male human of about 150 pounds.

In anthropology, pygmy peoples are ethnic groups whose average height is unusually short. The term pygmyism is used to describe the phenotype of endemic short stature (as opposed to disproportionate dwarfism occurring in isolated cases in a population) for populations in which adult men are on average less than 150 cm (4 ft 11 in) tall.6

Thus it would be possible to have have a population of pygmy riders who weight about half as much as most adult humans and thus about 75 pounds, which would be 0.1363 to 0.1704 of the weight of a 440 to 550 pound Quetzelcoatlus.

So I can imagine a situation where normal sized children ride on quetzels for various puposes of greater or less importance but adults (except for rare dwarfs) are too heavy to do so. Or maybe at fairs kids can get rides on tethered quetzels.

Homo luzonensis, also locally called "Ubag" after a mythical caveman,2 is an extinct, possibly pygmy, species of archaic human from the Late Pleistocene of Luzon, the Philippines. Their remains, teeth and phalanges, are known only from Callao Cave in the northern part of the island dating to before 50,000 years ago. They were initially identified as belonging to modern humans in 2010, but in 2019, after the discovery of more specimens, they were placed into a new species based on the presence of a wide range of traits similar to modern humans as well as to Australopithecus and early Homo.

Since the remains are so fragmentary, it is difficult to make accurate estimates of actual size for this species, but they may have been within the range of modern day Philippine Negritos, who average 151 cm (4 ft 11 in) in height for males and 142 cm (4 ft 8 in) for females.2

Homo floresiensis ("Flores Man"; nicknamed "Hobbit"6) is a species of small archaic human that inhabited the island of Flores, Indonesia, until the arrival of modern humans about 50,000 years ago.

LB1's height is estimated to have been 1.06 m (3 ft 6 in). The height of a second skeleton, LB8, has been estimated at 1.09 m (3 ft 7 in) based on tibial length.8 These estimates are outside the range of normal modern human height and considerably shorter than the average adult height of even the smallest modern humans, such as the Mbenga and Mbuti at 1.5 m (4 ft 11 in),[64] Twa, Semang at 1.37 m (4 ft 6 in) for adult women of the Malay Peninsula,[65] or the Andamanese at also 1.37 m (4 ft 6 in) for adult women.[66] LB1's body mass is estimated to have been 25 kg (55 lb). LB1 and LB8 are also somewhat smaller than the australopithecines, such as Lucy, from three million years ago, not previously thought to have expanded beyond Africa. Thus, LB1 and LB8 may be the shortest and smallest members of the extended human group discovered thus far.[67]

In addition to a small body size, H. floresiensis had a remarkably small brain size. LB1's brain is estimated to have had a volume of 380 cm3 (23 cu in), placing it at the range of chimpanzees or the extinct australopithecines.[3][42] LB1's brain size is half that of its presumed immediate ancestor, H. erectus (980 cm3 (60 cu in)).[42] The brain-to-body mass ratio of LB1 lies between that of H. erectus and the great apes.[47] Such a reduction is likely due to insular dwarfism, and a 2009 study found that the reduction in brain size of extinct pygmy hippopotamuses in Madagascar compared with their living relatives is proportionally greater than the reduction in body size, and similar to the reduction in brain size of H. floresiensis compared with H. erectus.[70]

Smaller size does not appear to have affected mental faculties, as Brodmann area 10 on the prefrontal cortex, which is associated with cognition, is about the same size as that of modern humans.[42] H. floresiensis is also associated with evidence for advanced behaviours, such as the use of fire, butchering, and stone tool manufacturing.4

Someone writing a fantasy story can make humanoid pople as small as they want while remaining intelligent beings, and can make flying creatures as large as they want.

And it seems that the example of Homo floresiensis proves that in a science fiction story humanoid people can get at least as small as 25 kilograms or 55 pounds while retaining approximately human intelligence.

So you need to find examples of the percentages of their weights which various flying creatures are known to be capable of carrying for various distances and times to see how plausible quetzel riding can be.

As for how your people could tame and train quetzels, perhaps the quetzel riders are not the quetzel tamers. Maybe there is a giant species in your world, which is almost as large compared to quetzels as humans are compared to the largest present day birds. Humans tame and train many species of raptor birds for falconry, ranging in size up to the golden eagles used by Mongolians.

So maybe the giants tame and train quetzels for falconry and carrier pidgeon duties, etc., and then sometimes train them to carry smaller people, perhaps adult humans, adult human pigmies, human children, or adult "haflings" the size of Homo floresiensis.

And since nobody knows much about the intelligence of quetzels, you might want to make your modified versions seems as intelligent and trainable as possible, perhaps being herd animals with complex social lives and thus comparatively easy to train to consider giants and humans part of their flock.

There are many other relevant questions on this site.

I tried searching for "size of flying creatures" and got 277 results:

What's the scalability of this flying strategy?

How to make a viable flying mount?

How big does a pelican type creature need to be to carry a grown up human inside its mouth and still fly?

How small can a humanoid be? Answer: really small, with the relevant science and arithmetic here: At what size would a Fairy be biologically viable?

Equines can carry about 30% of their bodyweight, as a rule-of-thumb. Flyboys could, I imagine, carry far less, maybe 10%. Quetzalcoatlus weighed about 200kg according to https://en.wikipedia.org/wiki/Quetzalcoatlus#Size so maybe aim for a 20kg humanoid. That's certainly a feasible size for a humanoid; it's about 28% of the weight of a person or 40% of a jockey.

They could be easily ridden

Quetzalcoatlus was a large and strong animal, and could easily bear a normal sized human. Its back, though it may not be fully fused, seems quite strong. While its body-shape seems ill-suited to being saddled, this could be changed for your version. Perhaps you could give it wider shoulders. I'd speculate that Quetzalcoatlus would be a lot like a horse, just bigger and carnivorous

If you want your Quetzalcoatlus to be flown, then it's a lot more implausible. Firstly, it would be very hard to make a saddle that won't fall off immediately, especially for a flight-worthy Quetzalcoatlus. Furthermore, Quetzalcoatlus was not adapted for flying all the time. This means that either you'd have to make it completely unlike a real Quetzalcoatlus, or impose some heavy limitations on their use in the air. I'm not sure how small the humanoids would have to be, but it'd probably be very small

Use a very small humanoid! 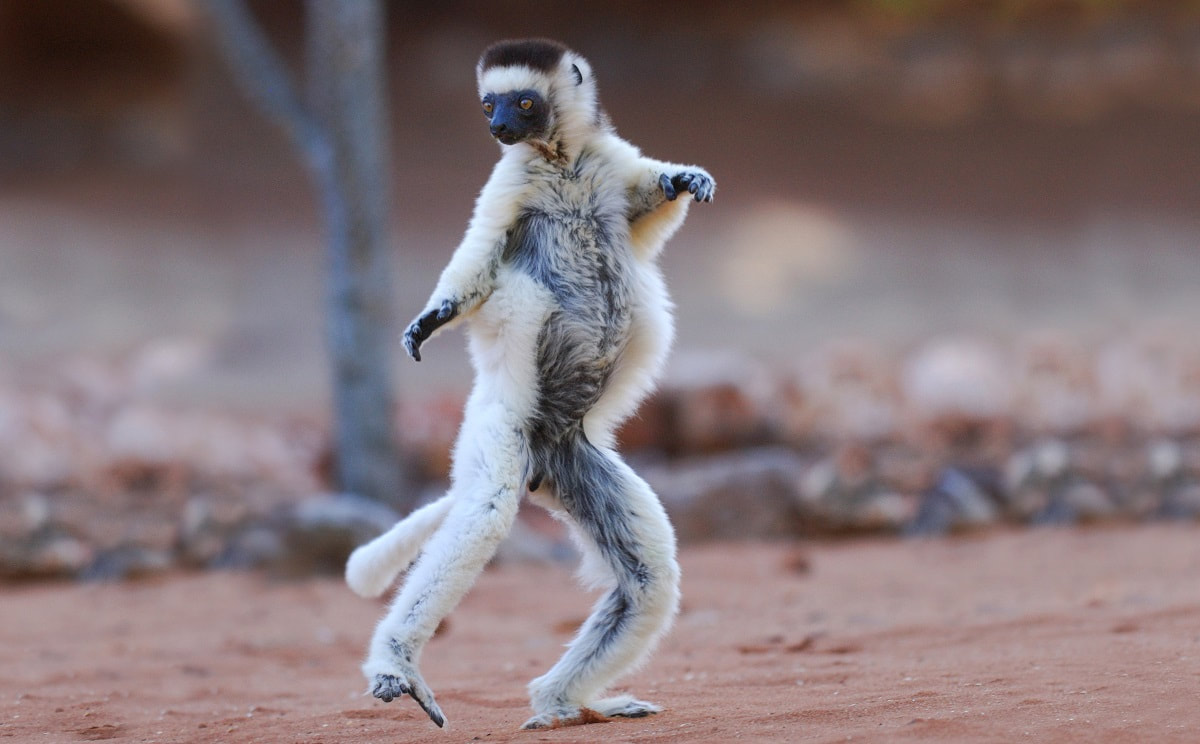 They are out there. At 3.5 kg and 45 cm tall the Sifaka lemur is a fine start for your little humanoid. It does not take a lot of imagination to have these things walking around, chatting people up. In fact one did exactly that (with some puppetry help) with the Kratt brothers on their Zooboomafoo show. On looking for an image with the lemur and the Kratt's I learned that the lemur from the show lived to be 20 years old! 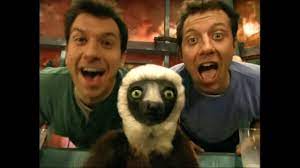 Look at those handsome Kratts! Especially Chris. I am envious of the fact that they have since both transformed into ageless cartoon avatars.

Not the answer you're looking for? Browse other questions tagged fauna flight .

21
How to make a viable flying mount?
23
How does a society domesticate the hippo?
8
At what size would a Fairy be biologically viable?
8
Can a horse-sized flying creature grab and carry a human's weight while flying?
4
What's the scalability of this flying strategy?
2
How big does a pelican type creature need to be to carry a grown up human inside its mouth and still fly?

13
How could animals evolve like they do in Pokémon?
10
What benefits, if any, would animals have on an island given that they all have black fur or skin?
4
How useful would small, domesticated, omnivorous bears be?
33
How small could an animal be before it is consciously aware of the effects of quantum mechanics?
10
What sort of animals would a civilization of small feline omnivore humanoids domesticate
4
If you could train them, would bulls make good cavalry?
1
How Could Cold-Climate War Animals Such as Mammoths be Adjusted for Warfare in Warm Climates?
5
is it possible in a given world to ride a triceratops and so how would it work?