In my world, I'd like to place a region of permanent forest fire, but I'm having trouble coming up with the minute details of the biome.

For example, my first idea was that it started when a lush, humid forest was exposed to a volcanic eruption, followed by a permanent but slow lava flow, lasting long enough that some plants have adapted and evolved into flora that relies on the constant fire and is itself so slow to burn it can outgrow whatever is lost to the fire.But how plausible is that, biologically speaking?

What is a better approach to creating a permanently burning forest?

Yes there is a better approach 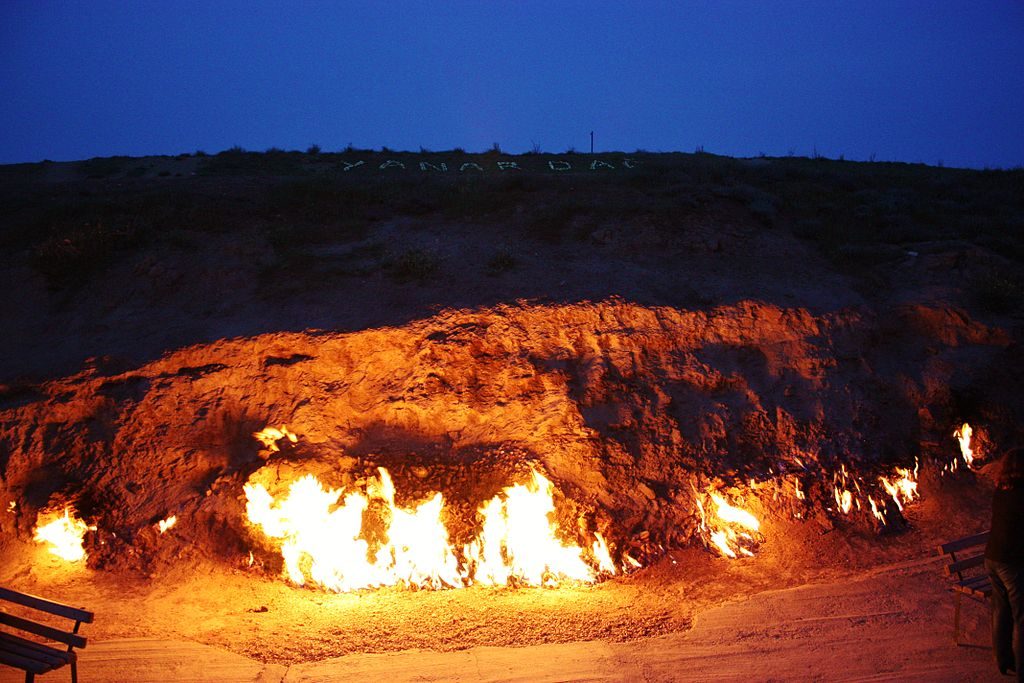 The volcano essentially did a naturally occurring version of fracking, creating channels to the surface for gas, while land slides exposed coal seams, in some instances laying the coal bare on the surface.

These fires ebb and flow with the seasons, especially effective if they are not the four seasons we have on the temperate parts of the Earth (Winter, Spring, Summer, Fall) but instead Wet and Dry seasons like in the tropics.

The biology would have to...

Vines and brush — where the roots go deep — would work, the plants survive having the surface parts scorched off because when the water comes, the roots shoot and grow new surface parts and send vines in all directions. 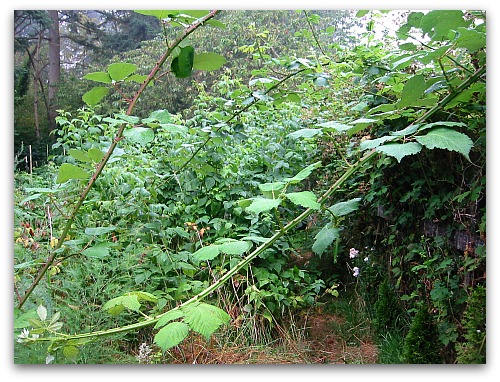 Blackberries are infamous for forming brambles and spreading quickly

Quite a few plants - mostly trees - have evolved to require fire to germinate! This seems like the seed of what you might need - combined with a geography that's appropriate.

Annual fires are common in several areas; but what makes them not permanent is the weather cycles. This could possibly change, though, and become permanent in a way - if your geography allows the fire to "travel".

Imagine a Pangea type world, a single large continent taking up 30% of the surface area of the globe, say. If that Pangaea is ringed by forest, and if the weather patterns comply, it's possible that you could have a travelling fire, which, say, is on the east from March to June, the north from June to September (northern summer), the west from September to December, and the south from December to March (southern summer). (West/East could easily switch, of course.)

The fire could literally travel in that way, ringing the globe every year. Then, cultures would possibly come up that would worship the "renewing fire", have rituals based on it, etc.

I'm not sure what you'd need for the weather to work out this way (you'd need the rainy season to not coincide with the fire, but to coincide with the end of the fire, for example), so that part might be a bit handwavy - but it seems like a possibility, if you're not going into meteological science fiction, at least!

t started when a lush, humid forest was exposed to a volcanic eruption, followed by a permanent but slow lava flow, lasting long enough that some plants have adapted and evolved into flora that relies on the constant fire and is itself so slow to burn it can outgrow whatever is lost to the fire.

I don't think that can work. Evolution for something to adapt to those conditions would take several generations, even assuming an annual reproduction cycle for something like grass that would take decades or centuries.

Over that time span a lava flow would involve volumes so huge that it would annihilate any volume organically produced in the same time. And don't forget that, though volcanic soil is fertile, it cannot straightforwardly grow anything on it without some weathering.

Weathering requires time to happen and, most importantly, exposure to weathering agents, which is going to be difficult or impossible with new lava flowing on the old one.

But how plausible is that, biologically speaking?

Is there a better approach to creating a permanently burning forest ?

Your only chance, by direct evolution in hot conditions.

You can't have traditional trees they're too slow you need something that grows far faster, probably faster than Bamboo or even Kudzu, something with a growth rate in the 10s of metres a day range, more importantly 10s of kilograms per day. I don't think osmosis allows for absorbing, moving and just chemically processing that much material but lets go with it. What is this plant going to be like:

All of these adaptions do exist in nature; Oak trees survive grass fires in meadows by having a thick spongy bark. Willows have high silica in their wood making it slower burning, which is not why it is there but is a useful side effect. Many grasses in fire prone environments have deep roots to survive burn over. Clover roots exude acid primarily to balance their pH in light of nitrogen fixation but it has the side effect of mobilising nutrients from dissolved soil particles as well.

Such a plant won't give you a big flashy crown fire but it could smolder continuously pouring smoke and ash into the environment and burning anyone who ventures that way.

I reiterate that I do not believe that this is within the reach of the biological systems we understand and share our world with but maybe if it smoldered slowly enough without burning out it could work.

You can't. It's simply a matter of energy input and output. The sun delivers about 700 W/m^2 to the Earth's surface. Plants convert a small fraction of that into biomass. (Photosynthesis is at best only about 5% efficient: https://en.wikipedia.org/wiki/Photosynthetic_efficiency#Typical_efficiencies )

A fire will convert many years worth of plant-produced biomass into CO2 & H2O in minutes to hours*, releasing the stored energy in the process. Then no more fire until the plants have a chance to regrow.

Even the coal seam & natural gas fires mentioned in another answer demonstrate this. It took probably millions of years of plant growth to produce that coal or natural gas, which is now burning at a rate far greater than production.

You can do one better than a permanently burning fire - a natural fission reactor. The best part? It isn't science fiction, it's history: https://en.wikipedia.org/wiki/Natural_nuclear_fission_reactor

OK, maybe "permanent" is a bit of an overstatement, the one that existed on Earth only ran for hundreds of thousands of years. It required a high concentration of fissile Uranium and some groundwater. You could do all sorts of things with the water coming as part of a rainy season, or a river meandering to the wrong spot....

You also have a fuel in a fixed location and life won't exist right next to it, but there will be a fringe that is just at the boundary of survivability, and is changing little for thousands of years, which seems ripe for evolution. If you want to keep the evolutionary challenge as heat rather than radiation, then the specific locations will be cracks in the rocks where the steam escapes, some could be hot enough to produce flames whenever burnable material is available.

Fire loops around the globe

Your planet has its landmass as a band around the equator. (or, alternatively, there's [almost] no open water, poles are covered in snow, leaving only the equatorial zone available to the biomass)

Somehow, there are no large rivers. (plants still need to get moisture, and there's evaporation, which means there ought to be rain- or snowfall, which usually means runoff, but fires tend not cross large bodies of water... figure this out).

The equatorial zone is dry-ish, and e.g. typically covered by grasses.

The fire started (magically in only one direction), spread the entire width of the equatorial zone, and continues to burn, e.g. westwards.

By the time the fire has reached it's origin, that part has already sprouted new mature (and dry) grass, with seeds either preserved deep in the soil, or spread by wind, or spread by birds or even migratory animals.

Thus the fire continues to burn in a circle around your planet.

The long-lived plants died out, what remains are grasses and maybe shrubs.

The plants have therefore evolved to live in this cycle, and so have the insects and the animals.

Thus, for a planet the size of the earth, the fire circumnavigates in ~4½ years, leaving enough time for plants to germinate, go through several life cycles and accumulate large amount of stale, dry biomass.

Biology already knows plants that got adapted to periodic fires. These include either fire-resistant trees that just do not catch fire because of some non-burning composition or seasonal plants which get burned but keep roots and/or seeds intact so to re-grow.

A permanent forest fire with burning trees is likely impossible, because it would require much more energy than can be produced.

So, you are confined only to a choice of either periodic, seasonal fires or fires with fuel supply other than trees.

That fuel supply can be natural gas, petroleum, underground coal or peat deposits, or gas produced by microorganisms on swamps (burning methane is common in swamps, producing "lights").

The underground peat deposits can burn for years in Moscow area, even under snow, producing smoke. But, of course, this does not mean the trees are burning all that time.