How could blood be purple and reasons for it?

This is for an alien life form with similar biology to mammalian Earth life. I already know about hemerythrin. I don't like the disadvantages it has. What are different feasible ways for blood to be purple(dark purple would be best) without it being toxic or having any other disadvantages in comparison to red blood?

Your species has two parallel oxygen-carrying systems: one using hemoglobin, one using hemocyanin. While I won't try to justify how it got that way, there could be some good uses for this. Hemocyanin is found as free proteins in the blood, so these smaller molecules than red cells may help with peripheral perfusion into tissues where the blood vessels are extremely small. Or perhaps your species regularly encounters toxins that affect hemoglobin, like cyanide, that don't affect hemocyanin. And while carbon monoxide will react with hemocyanin, it's reaction with CO is WEAKER than with oxygen, rather than stronger like hemoglobin. So two parallel oxygenation systems (while a bit competitive, potentially) allow greater flexibility against environmental toxins. (Cyanide also affects the mitochondria, so other adaptations would be needed for that).

Or you can bypass the fancy reasoning and simply have a blue compound in the blood that causes the red blood to appear purple. 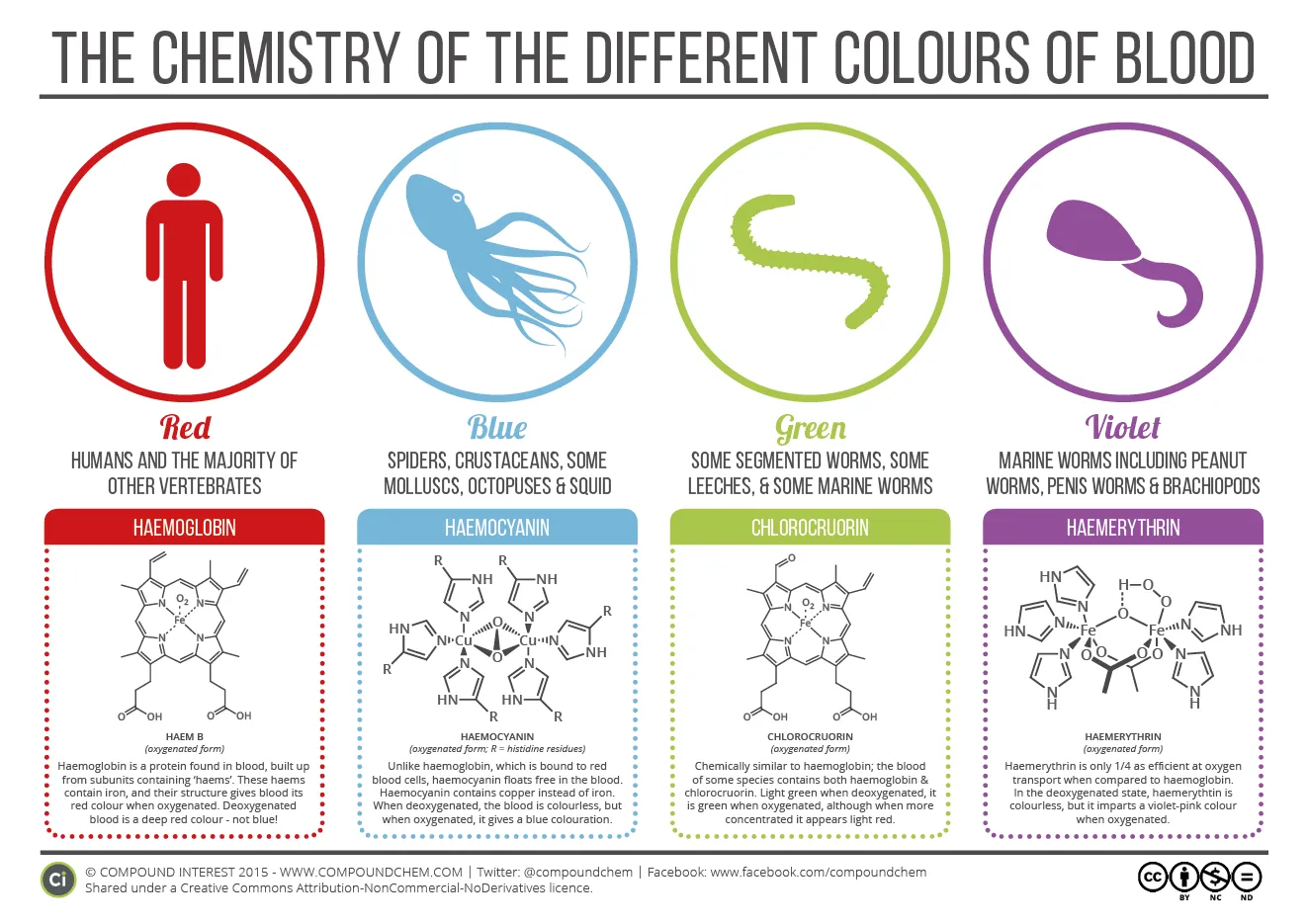 I guess I should make my comment above an answer. I've been thinking of it and it can be a solution, built upon the useful information provided by @DWKraus

In this case, 10's of millions of years ago, a parasite and host developed a mutual co-existence relationship. The host provided sustenance and transportation, and the parasite provided something, maybe a form of protection (defensive venomous stingers), increased energy or a better method of metabolism (such as what mitochondria does now.) Some mechanism that made it that the two cannot live separate from each other.

Now the host could be a mammal, having red blood and the parasite being a type of cephalopod, having blue blood. After many millions of years of co-evolution, the host began to absorb the parasite and integrate its body into itself, becoming an endosymbiont. In this method, many different species would develop, creating many variations to finally creating a successful body plan.

Now, in this 10-50 million years of evolution, it is not enough time for the full conversion to be completed. Some of the necessary organs of the parasite have yet to be fully powered by the host's metabolism and the two blood systems cannot power the organs of both systems, so a type of separate circulatory system had to develop to power the organs of both creatures.

Now, the blood is not purple as you would like, but if you cut this creature, as the answer above states, red and blue make purple. The two bloods spill out and mix, making it look purple.

Not the answer you're looking for? Browse other questions tagged biology .

5
How can I preseve a small sample of blood for centuries?
2
If a humanoid species evolved on the dark side of a planet would they be 'warm blooded'? Other physiological factors?
4
How could a biologically engineered body dump toxins from the blood stream?
3
How to justify a scarcity of sulfur minerals, and the impact this might have on a fantasy world
11
How Efficient Could Anaerobic Megafauna Be?
6
How could a race of humanoids have grey skin?
28
Is it possible for a tiger's tail to be taken off and replaced with a living cobra, with both creatures still alive?
6
Miniaturization of nerve cells
1
My magic is blood magic. How can my magic users quickly regenerate blood?
6
Would a copper-based pigment give my Orcs green skin?