Maximum number of earth-like planets in a system

I stumbled upon a site a few months back that went into detail on this issue. The site is made by a man who knows what he is talking about. Read the whole thing for more detail on how he came to his conclusions. The question is, is the system artificial, or constructed? If its a single star system you could fit 36 planets realistically. Double that for a double star system. Of course this really couldn't exist natually, the odds are really against it. But as a construct, absolutely. http://planetplanet.net/2014/05/23/building-the-ultimate-solar-system-part-5-putting-the-pieces-together/

To answer, I split this question into multiple parts (each of which may have subparts):

For 2, the conservative zone is about 0.5 AU, centered on Earth's orbit, for Sun-like stars. Stars that are somewhat smaller than the Sun have smaller Goldilocks zones (but live longer so life has more time to evolve); stars slightly large and brighter than the Sun (but burn out faster giving less time for life to evolve). Stars with types other than F, G, and K are unlikely to support life.

Because the habitable zone moves during the star's lifecycle (Venus used to be when the Sun was cooler, and Mars will be eventually as the sun gets hotter), I find it somewhat unlikely that more than two orbits could fall into the zone for much of a star's life. However, since both Venus and Mars are almost in the zone and we don't really know how much they are hurt by not having a massive moon (which is necessary for tectonics and a magnetic field), I'll say 3 orbits.

For 3, you can consider rocky planets or the moons of gas giants. There are stable solutions that involve two planets sharing the same orbit. You might be able to replace each of those planets with a pair of planets orbiting their common center of mass while that center orbits the Sun. This way gives you a total of 1*3*2*2=12. Though I'm not sure if all the doubling is really safe so 6 would be a much safer number.

Although gas giants have many moons, they are unlikely to have more than 4 with significant mass, and the presence of gas giants in the inner system invalidates the doubling cheats we used in the rocky case. So just 1*3*4=12. Note that with gas giants you do have a larger goldilocks zone, but this is cancelled out by the fact that gas giant orbits must be farther apart.

If you don't mind long-term instability, a Klemperer Rosette https://en.wikipedia.org/wiki/Klemperer_rosette 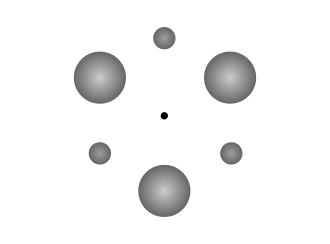 can be extended to any number of bodies

Unfortunately, these are not stable, although it is suggested in the Wiki article that a 12-body version may be stable since each body is at the one of the Lagrange points of two others.

3
How many habitable planets can I have around my star?
36
Can a planet realistically have multiple suns?
16
Viability of a mega star system
2
What distances would be involved in this planetary system?

2
What distances would be involved in this planetary system?
8
What kind of human habitable planets should in put in the goldilock zone?
2
Conditions for human life in a Jupiter-like system
3
Are my planets too close together?
12
What is the theoretical maximum number of habitable planets in one solar system?
5
What conditions to make this habitable moon plausible?
8
Is it possible to have earth like planets in Jupiter lagrange points?