Why would very large trucks regularly be used for logistics?

The very large trucks are mining truck size. They can haul 300 to 100 tonnes of Thing™. They can be outfitted to carry containers.

They have a roughly equivalent curb weight to their payload. They can travel at up to ~100kph. They need wide, level, dedicated roads. But they can travel at most of their top speed without paving. But this is bad on their wheels.

The biggest issue I see with these things is that they wouldn't be that efficient compared to trains. There is near future technology.

The land is flat and hard and disruptive to rails:

Your environment needs to be filled with hazardous material disruptive to rails. The terrain can shift regularly, or be filled with a corrosive substance that will slowly dissolve any rails put down. While your vehicles are affected by the corrosion, they can be hosed down at the destination and coated anew with anticorrosive coatings. Or perhaps there is some organism (intelligent or large) that actively destroys rails.

Your terrain should be relatively flat and featureless, but the ground should be well packed or stone - a natural road bed for your vehicles. But when I say relatively, we don't want perfect, or else someone will use a vehicle with smaller tires. So a terrain with no major irregularities, but small ones - imagine a city-sized ball pit filled with head-sized boulders. Perhaps a terrain constantly hit by small earthquakes that have broken down the surface to the consistency of gravel. While train tracks keep getting broken, big trucks keep on truckin'.

Ice might be a nice choice (especially if your trucks can float if needed) as the terrain would change enough to disrupt trains, but still stay flat enough for your trucks. If rivers were shallow and frequent, mostly frozen but occasionally thawed, they could be made to be roads. Even if your truck broke through, they could drive on the bottom.

An alternate version of the river scenario is if the terrain they need to travel across is frequently interrupted in shallow water with a hard bottom - the big trucks can simply drive through these obstacles, while lesser vehicles can't.

Look at the reasons that trucks are used today instead of trains. The routes that trucks follow can change very quickly while it takes a long time to change railroad tracks. Even in the first days of railroads, it took a while to survey the proper route for a railroad. Truck roads can be built faster, they can go over rougher ground, they can go up and down grades that railroads can't. Schedules are much easier to change. At the start and end of the trip, trucks can change where they pick up and deliver to far easier than railroads can.

In Australia, they use trucks hauling many trailers as "truck trains". (Other places allow doubles and a few triples.) Again, this was faster than building a railroad.

So, to answer your question, one of the major determinants of why very large truck would be used for logistics would be whether the government decided to subsidize the use of those trucks.

Thing™ comes in a fixed size. 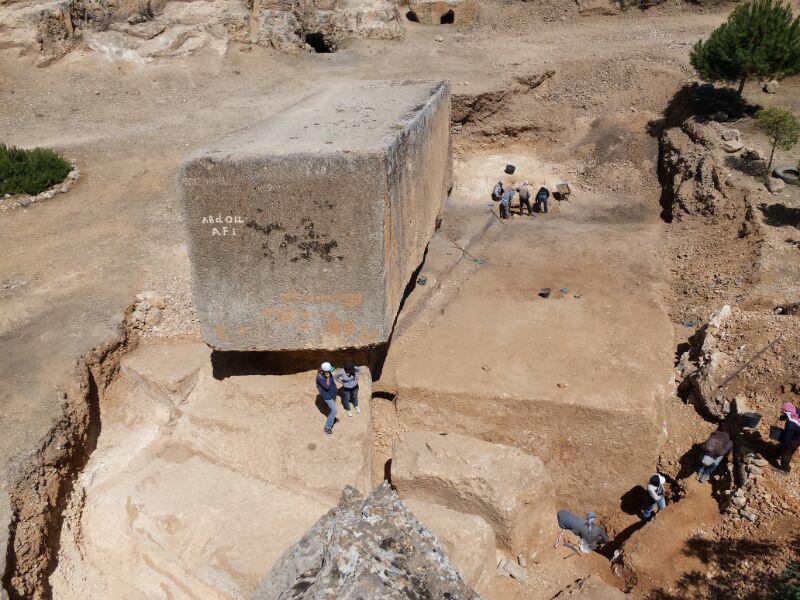 And Thing™ is big. There is no way to break it up into smaller thinglets to transport on trains or barges. Thing™ is the size it is. And if you want Thing™ you need to move it in a vehicle that can accomodate its very large bigness.

There are a lot of threats in the path from A to B traveled by the big truck, and they travel in convoys, with the main truck surrounded by other vehicles dedicated to its defense.

This sort of mimics how carriers cruise the oceans, for the same reasons.

A railway, in a scenario of constant threat, when compared to your truck which apparently can fairly manage unpaved roads, has two disadvantages:

Easiest way is cargo width requirements. Trains run on track gauges. Making them broader is more expensive both for the tracks and everything associated with them. So if your cargo sometimes is exceptionally wide you cannot use a train.

Another possible reason is if some of the land is disputed. You can't build rails etc,. but a convoy of guarded trucks is different. Or rails are a sabotage risk.

Thing does not have fixed sites for loading/dropping-off

Trains are great when you have to move payload between two fixed points A and B. Even greater if said train uses that rail route repetitively.

Unfortunately, there is no fixed place with respect of transporting this Thing around. Building a rail route may not be worth it, especially if it turns out you've built it in the wrong area and you don't need to use it anywhere enough ever again.

On the other hand, the trucks can traverse most part of your area. Half of your areas are already developed and have some sort of roadway infrastructure available. The proportion of roads with high-quality dedicated tarmac may not be 100%, but it's already above the safety and practicality margins required for the tracks.

So, trucks, because it can afford flexible load/drop-off points and it's infrastructure requirement is not as gambling and demanding as rail routes.

Such trucks already exit and have existed for decades. They're called road trains or long combination vehicles.

They transport freight across some of the harshest environments on Earth. 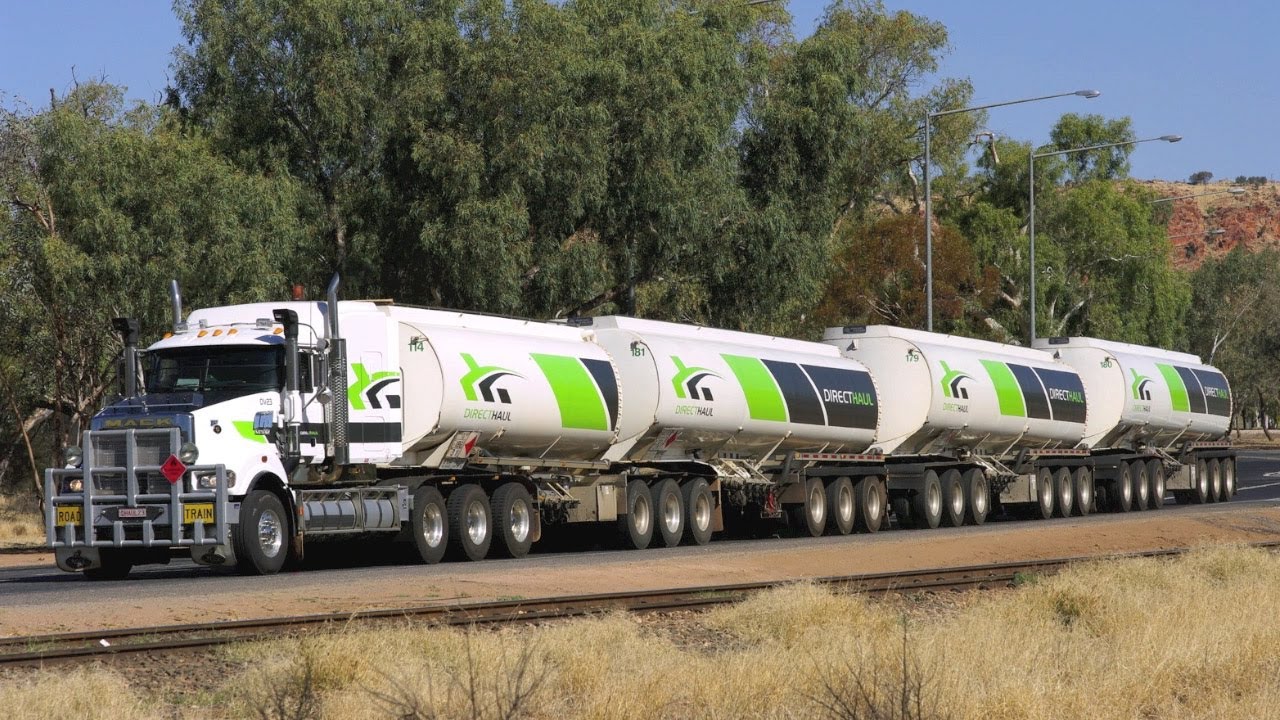 They are used in Australia, Europe, the US, Mexico, Zimbabwe and the have been used in Argentina.

Depending on the configuration and the legal restrictions in each jurisdiction they can be a single prime mover with several trailers.

In Australia they can be up to 53.5 meters long and weigh up to 200 tonnes. They can travel at speeds up to 110 km/h. The limit so far being legal restrictions. In remote regions without rail they are sometimes the only way to transport freight and they do it efficiently. They are used on both sealed and unsealed roads. Though, wet dirt roads, after heavy rainfall, can be be problematic. 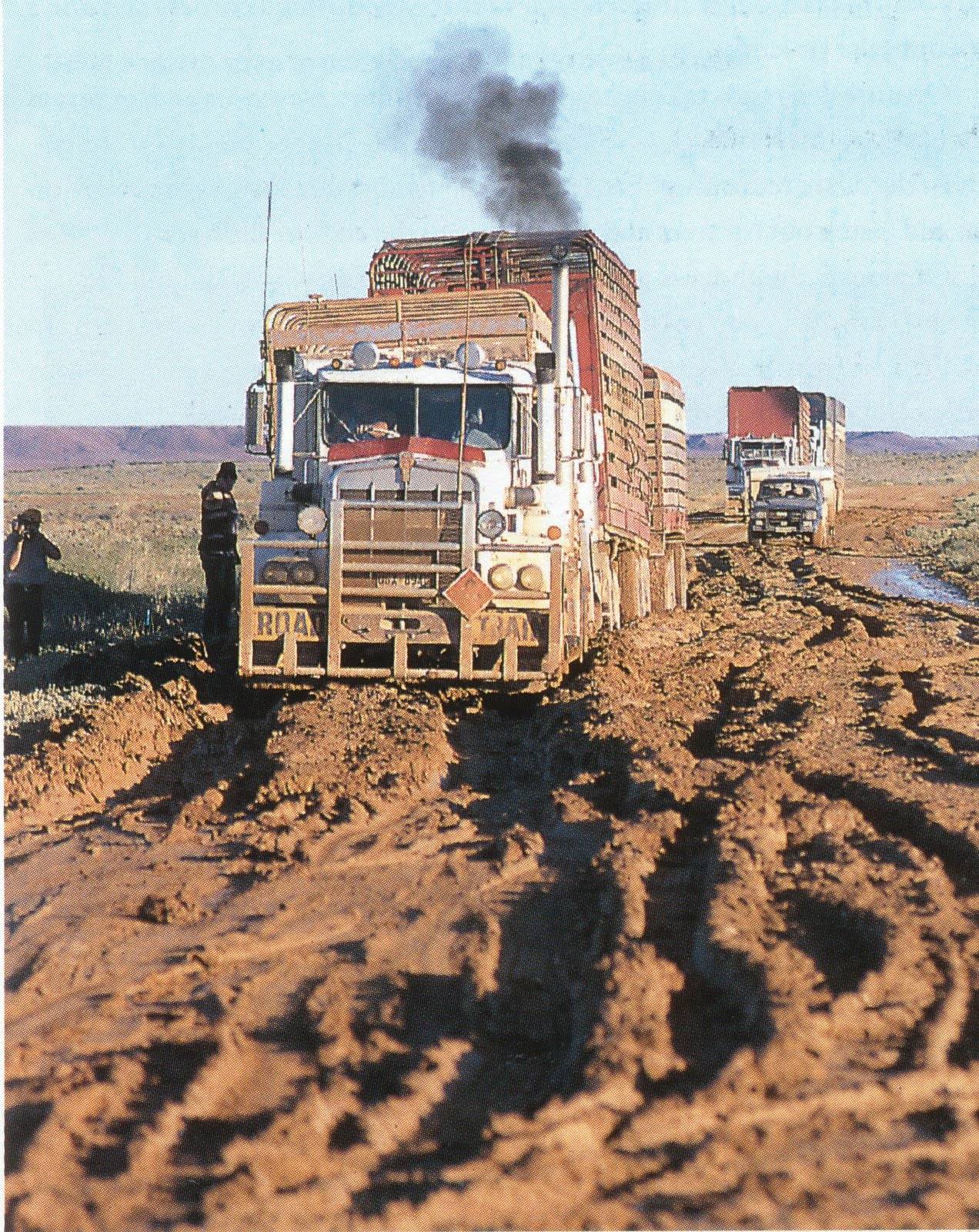 The equivalent of cows.

During the expansion from east to west in America the railways had to occasionally deal with cows on the tracks. A train cannot go around them, a truck can.

Some form of large animal lives in the area. You arent allowed to seperate its living area (or that of another species) with rails+fences while creating a long stretch of high terrain with wildlife tunnels is just not economically feasible. You'd have to maintain the rise, fences and tunnels.

So you build roads with trucks that can move off-road for a moment to avoid these creatures should they block the road.

Putting down and maintaining a road is 'easy'. For high speed rails, you need continuous welding, a whole load of dedicated infrastructure including switchgear and turntables. A train can't really go backwards easily either. A train certainly can't overtake.

While maintenance is needed, a wide enough road system means your trucks can overtake each other (and a train style central control system would be useful!), split off the 'main' path easily without dedicated hardware. You probably would periodically close off one half the road, repave the thing overnight, and you're good for quite a while.

Essentially the ideal use case here is lots of high volume (so the big trucks are useful), high value (so the capex is worth it) items.

Supplying a spaceport or 10 might make sense - especially if you're doing interplanetary mining. Space ships are large and bulky and can't be built onsite. A remote location might be the best or safest place for such an installation. You'd occationally move rocket segments (bulky/light), supplies and fuel to the spaceport, and come back with ore (heavy) - which explains the basic mining truck design for these vehicles.

Not the answer you're looking for? Browse other questions tagged near-future vehicles logistics .

5
Logistics of high-quality lifestock delivery for alien megacity?
5
Horse-logistics for a militia of 350
5
What would make planet very hard to pacify?
128
What vehicle would be the best one to start a >1000 km travel in a post apocalyptic zombie situation?
2
What would be the logistics behind evacuating the Western United States?
4
Why would warfare become mostly built upon large fortress firing large artillery pieces at other large fortresses?
3
Why would large fortifications make a comeback in the near future?
4
What would a unit built purely for fighting in extremely large buildings for look like?
2
Why would a military use hybrid jet-propeller planes?