How would a two thumbed hand work

If our hands had 2 thumbs and 3 fingers how would they work? I mainly concerned with the bones and how they would interfere and interact with each other. But the muscle work would be helpful as well.

As far as anatomy goes, it would look about like this: 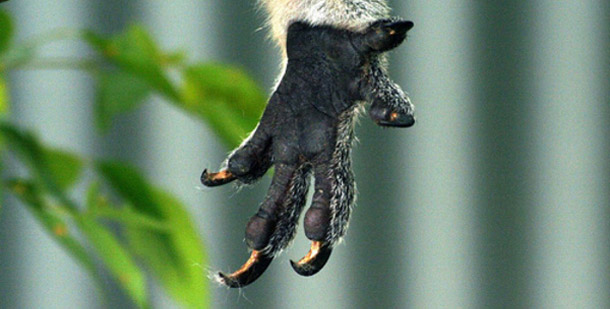 That's a picture of a koala hand, which has two opposable thumbs. If we had two opposable thumbs, they'd probably be structured roughly the same way. This kind of hand structure is common in several other marsupials as well, such as the cuscus. It aids them in climbing trees.

The cuscus: another animal with two thumbs.

For animals with two 'thumbs' which point opposite the fingers, a good example in nature may be the osprey. 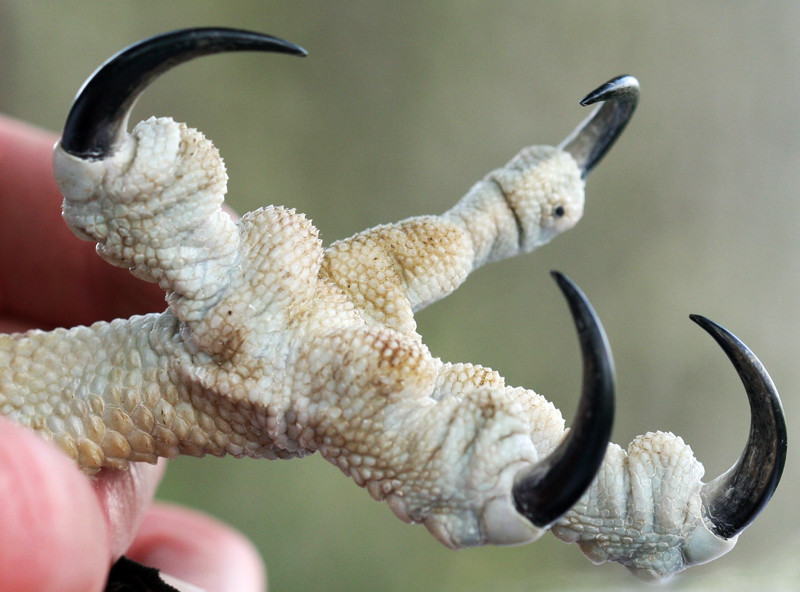 Unlike koalas, which utilize their dual thumb to hold on tightly to branches, osprey use their talons to grip slippery squirming fish of uncertain orientation. While the second thumb may get in the way of strongly opposing the main toes with the first thumb, this omni-directional grip makes fishing easier. This arrangement of toes is called zygodactyly, and is found in ospreys and owls, as well as in parrots and woodpeckers.

Interestingly, in ospreys, the second opposed digit is not held in fixed opposition to the main digits, as is the case with our thumbs, but can swivel back and forth between opposing and not opposing the main talons. This, presumably, allows the bird to obtain a tighter grip during activities like perching, in which a firm grip is more important than an omni-directional one. It's likely that the hand structures of a two-thumbed sentient being with a thumb on either side of the hand would allow for similar behavior.

Woodpeckers also benefit from the omni-directional nature of a zygodactyl foot, but in a different manner. Rather than using their claws to grasp and lift slippery fish, woodpeckers use them to cling to the sides of trees while they feed. Woodpeckers, as a result of their zygodactly feet, can orient themselves upwards or downwards on the trunk of a tree, or even on the bottom of branches, to obtain food from a greater number of locations than they'd be able to without a firm grip or with a grip that only worked optimally in certain directions. Parrots, similarly, climb about in trees while eating fruit, and utilize their zygodactly feet to hang sideways or upside-down while feeding.

In humanoids, zygodactyly would lend itself to two behavior patterns: ambush hunting of small animals (probably fish) or non-orientation dependent hanging. Humanoids with the first adaptation would likely have evolved to live in a similar manner to storks or herons, waiting still in shallow water for fish to approach, then rapidly grasping downwards to catch them. Such humanoids would probably be far more patient than humans are, needing to sit stock-still for hours on end in order to hunt.

Alternately, zygodactyly could be an evolution for locomotion across vertical surfaces, like the sides of trees. Our ancestors evolved thumbs for grasping branches, but if we'd instead evolved in an environment where trees had long, relatively branch-free trunks with few low branches or vines, but with featured, sturdy bark, zygodactyl hands and feed would have granted them the ability to climb up and down those trees in search of food. The Redwoods are one example of such trees, though it's likely that humanoids would need a better food source than pine cones to drive them to the tree tops. Arboreal zygodactyl humanoids would also likely have strong claws, capable of supporting their weight, in order to dig into tree bark.

Similar to how humans live on the ground but have thumbs evolved to climb trees, it's also possible that the zygodactyl thumb on an alien race may have evolved for arboreal locomotion or fishing, but was retained and repurposed by a ground-dwelling humanoid. Just as humans occasionally still climb trees or swing from our arms, a zygodactyl alien race would likely retain some of the traits and behaviors of whatever it's ancestral form was, but just as our behavior differs markedly from chimps, gorillas, or bonobos, the behavioral traits of our hypothetical aliens would be driven more by their pattern of live and environmental pressures than they would by their ancestry.

Having two opposable digits allows them to be different from each other, each specialized differently rather than a single compromise design.

Instead of guessing what if, we can examine animals that have relevant features. Our hand is not the only arrangement of digits. Questions of how it’s put together and how the actuators and structural members are arranged can be observed in various animals.

The link in the following paragraph lists no less than 15 –dactlyl ’s for a starting point.

Different from the osprey illustration in another answer, I’ve observed my Zygodactyl pet and pondered the fact that it’s essentially two thumbs.

Notice that our thumb can move two different ways: in opposition, or side-to-side up to being parallel with the other fingers. One of Diamond’s talons is also this flexible in what it can do, but is even more in opposition then our own thumb. The other outside talon is more dedicated to being used in opposition. Instead of swiviling out 180° (like our thumb does 90°) and then bending, it is more as if our pinkie finger were simply mounted facing the other direction. It gives more rigidity in the side-to-side motion, which is the opposite of flexibility.

So, having two different opposable digits means different trade-offs with conflicting design elements. It’s not two of the same thing, but a choice of two things.

I suggest you find video of different animals using their manipulatory digits. Spending time observing anything more alien than any fellow mammal (like dogs and cats) can be mind-expanding.

Can the human hand design be altered in this way? It appears that this would be easily workable.

Take the little finger (leftmost in this picture) including the metacarpal and turn it around, so the joints bend the other way. Adjust the shape of a couple of the carpals (wrist bones) to angle the finger so it closes in opposition to the middle two digits. 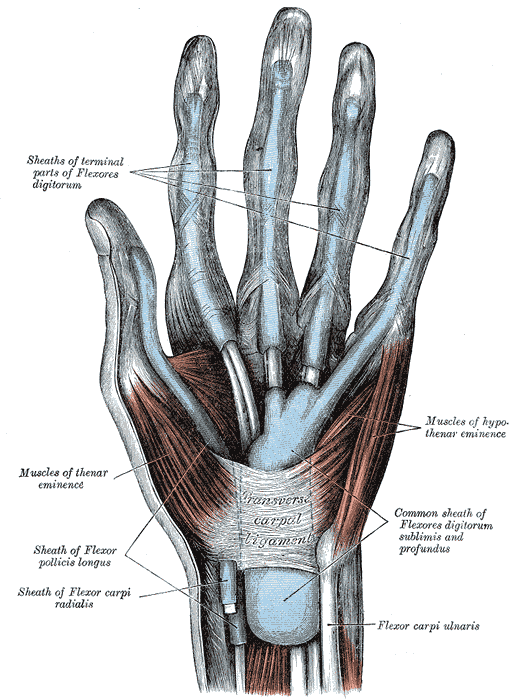 Just restack the three muscles in the opposite order so the opponens digiti minimi has leverage in the other direction.

The joint of the metacarpal to the carpal does not need to swivel in this way, and doesn’t need the muscle to provide such a range. Instead the anatomy is optomized for closing and grasping tight.

This means that the (original) thumb can be releived of this responsibility and be more specialized for swiveling. It will have a larger range of what it can oppose with, and improved dexterity for when it’s paired with the index finger for precision tasks. So, reduce the size of the opponens pollicis and abductor can be better developed rather than being “the most superficial”.

You could have 1 thumb on each side with the fingers in the middle. The thumbs need to be offset so that when you make a fist, one sits bellow the other. The configuration of the bones and muscles should be fairly obvious. You know how to place 1 thumb, on one side of the hand; now mirror this principle onto the other side of the hand.

Turn it around the other way: What disadvantage would there be to having an extra thumb on our hands.

If on the other side of the hand, next to the pinkie finger, it would get hit first when using the edge of our hand to strike something.

That digits get smaller/weaker/less controllable as you move away from the thumb suggests that the asymmetry of the hand is useful.

I've read that a relatively large amount of the brain is concerned with controlling motor action of the thumb. Given the time it takes to learn a motor skill, having a second thumb is not a clear advantage.

(You have two hands. But try to sign your name with your non-dominant hand. Different muscles, different nerves, different motor memory.)

Why don't we have two thumbs on each hand? What advantage is there to the regular human set up?

We have similarly strong muscles on both sides of the hand and no overall design limitation (arrangement of bones, ligaments, etc) that I can discern. So we could have two thumbs but don't, so why?

Because we'd have lots of broken thumbs. That meaty pad of muscle on pinky side of the hand is commonly what we pound with and is the leading side of the hand in most activities. With the smaller, more flexible bones there is room to absorb shock through the greater ratio of muscle and tendon to bone, and lower nerve sensitivity compared to the thumb (try it!).

Put the edge of your hand on the table with thumb up; it's comfortable. Now do it with thumb down, on the thumb only (no index finger); not so pleasant. It would be uncomfortable and dangerous to do manual labor or even shimmy along a branch. Since office work was hard to get a million years ago on the African savannahs this wouldn't have been an advantage. Overall it would seem to limit adaptability as those creatures that do have it are specialized.

Perhaps in your two-thumbed world agriculture wouldn't have arisen, too many smashed thumbs. Cooperation would be challenging since it'd be difficult to shake hands on a deal :) Our hands curve and cup, useful when carrying small things and taking a drink; not so possible without the pinky side of the hand (try it, keep the pinky side stiff and try to cup your hand from the thumb side).

The more I think of it the more awkward many regular activities would be. I now see both sides of the hand as having specialized function, a second thumb would be redundant and limit overall abilities. It would also be like having three pincers, the middle being more flexible.

17
How to justify digging claws and opposable thumbs in the same being
7
Advantages of different thumb orientations?
4
How and Why Would a Species Evolve This Hand Structure

4
How would the design of tools differ if people had developed crassly dissimilar hands?
14
What are the design implications on firearms when they will be used by a race without opposable thumbs?
11
Could a hexapodal bat actually fly?
5
What evolved weapons could be used against graphene skin?
8
Giving dragons more flight muscle
6
Geckos walking on two legs
4
How and Why Would a Species Evolve This Hand Structure
5
The most suitable martial art for birdpeople?
3
Hand mouths evolution