Why do my humongous cliff ledges have cultivable soil on them?

This world is basically a huge vertical cliff wall, hundreds of kilometers high. Some of the crevices and ledges in that wall are large enough to build cities on (up to kilometers in length and up to 500 meters wide). That's the largest horizontal surfaces available in this world, the chasm is literally bottomless.

How can such a world have cultivable soil on those ledges and crevices that can have things growing in it like trees or crops, if by logic erosion by wind and water from rains should flush everything off the cliffs into Below (which is inhospitably dangerous to all life even if there is a normal flat land somewhere down there)?

The technology level is somewhere around the late 19th century. No magic. Explanations that propose natural solutions are highly desirable over artificial means, since the people should've been able to survive and have agriculture in these conditions before inventing these artificial means to create and retain soil.

Waterfalls cause more erosion where they land than they do up or down stream which creates natural troughs. The waterfalls bring in mineral sediment, and the erosion patterns they create will create natural bowl shapes in the rock face that will retain these sediments over time. So your flat lands will over time develop lakes on the wall side and levees on the chasm side. As the flow of water changes over time, some of these waterfalls will slow down to a trickle leaving large sediment rich areas of dry land on the chasm side, and retaining small lakes for irrigation on the other side... or perhaps it is like the Nile and it floods seasonally bringing in fresh mineral sediment every year, then mostly drying up for growing season. 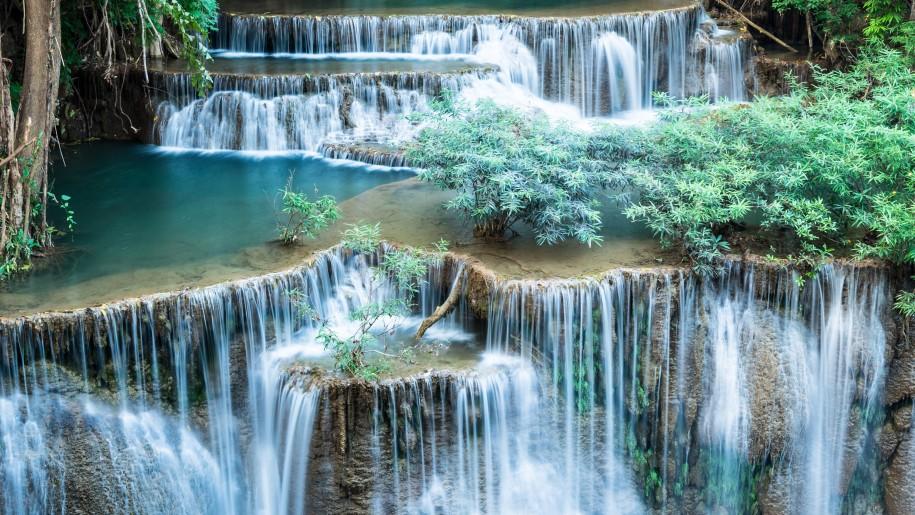 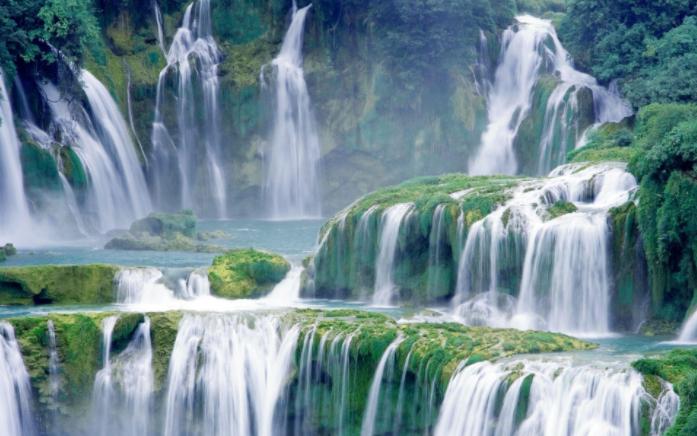 Specifically bat poop. Guano is some great stuff for growing, among other things. And of course, bird poop.

if by logic erosion by wind and water from rains should flush everything off the cliffs into Below (which is inhospitably dangerous to all life even if there is a normal flat land somewhere down there)?

By that logic, no highland anywhere would ever have any arable land. Which is not true.

But you also say:

Some of the crevices and ledges in that wall are large enough to build cities on (up to kilometers in length and up to 500 meters wide).

And that this is the only flat land. So things might live there. And living things, from cows to humans do poop. And a flat area that big means that stuff from above that would end up caught there. So, that's soil. That's growth.

What you haven't mentioned is...sunlight? How are they getting that?

For civilization, I would be putting soil and plants on moving carts to catch the sun. Sun will be more valuable than anything else. Some crops can grow in shadow or on the edge of a shadow that gives way to sunlight, but not all, and if plants have adapted to these conditions there should be some stuff that doesn't need as much sun.

Wind could work to deposit fine material onto the floor of crevices. When biological material mixed with this fine rock you get some fertile soil. And water can't wash it away because the soil is in a crevice. It just falls in front of it. hardy plants can spread from these more sheltered places. to the more inhospitable ledge-crevice combination. Just a couple of small loose rocks making a little sheltered spot just big enough for a single grass seedling would be enough of a start. Just having that single plant established stabilises that small bunch of soil. Enough that only storm like winds and fast flowing water would have a hope in taking that soil away. In fact slower moving winds would deposit some fine material into the crevices made by the plant. Increasing the available amount of soil and allowing for growth. This process will slowly cover the entire plateau. Parts can and would get washed away. But so long as it is just parts and life has been able to recover then those area's washed away would only temporarily be uncovered by plants.

Erosion isn't that uniform; your ledges won't be completely flat.

There's several ways that erosion might create sheltered nooks where life could evolve. Erosion will magnify any existing imperfections in the rock, and expand them into crevices. Heat expansion and contraction can lead to cracking. Rocks from one ledge can fall onto a ledge below (at least, this happens with sandstone, I don't know if it can happen with igneous or metamorphic rock). Alternatively, minerals leached from the rocks on one level might drip to a consistent place on a lower level, leading to stalagmites.

These will all create sheltered places where microorganisms (and eventually moss) can evolve. These microorganisms will evolve to adhere well to the rocks, and also to stabilise the rocks around them. Larger and larger mosses will evolve, as the previous generations make the landscape more hospitable. Perhaps this will lead to the formation of small, permanent pools of water, and eventually to the formation of parasitic organisms that eat the mosses. (You may want to check the science on this, I'm not sure if it's completely plausible, where the carbon was before life started moving it around, or whether the pools are necessary). At each generation, there's more and more shelter for life to develop. Eventually, there's enough shelter for soil to persist long enough for plants to evolve to grow in it.

I may be wrong, but I am going to have to make an huge assumption here.

This world is a constant cliff, overlooking oblivion. Applying physics, you cannot really have a constant air pressure unless:

Gravity works weird, pulling those on the cliff down and air towards the cliff face.

The world is really in some kind of finite system where air falls into oblivion and is constantly replenished and the same rate of loss. This, due to the regulated pressure and constant flow of air, should prevent a buildup pressure at the bottom. (Similar to a back pressure regulator in a water system.) However, I'm a little fuzzy on the physics of air pressure regulation based on its compressibility, but I will just assume that there can be a constant pressure maintained.

Assuming the constant pressure mechanism, there will be a constant flow of air rushing by the cliff face, causing significant erosion. This erosion will cause material to fall to ledges below. The lower the ledge, the more built up debris. This will allow more than just lichen to take root, producing more arable conditions further down. That is until the entire ledge is chocked full of debris that no one can make a home there.

from there, you can also add erosion due to water (which will also need to be replenished) and biological activities of plants and animals.

Not the answer you're looking for? Browse other questions tagged science-based geology flora erosion soil .

12
Why would a land creature have tentacle-like appendages
6
How would mountains and hills have to be made-up in order to impede tunneling them WHILE still allowing them to be mined out?
22
Is this coral lagoon geologically possible?
24
How many tectonic plates should my planet have? And why?
6
We Have Successfully Established Plants and Insects on Mars. How Long Will It Take Them to Colonize the Entire Planet?
21
Why would Martians have green skin?