This is the second part of a two-part question. This part uses third-party worlds to illustrate a couple of points, but it is not in any way about them, therefore this question is not off-topic.

So in the previous part of this question was asking about the feasibility of an airship kept aloft by dragon fire breath. (Link here Dragon Sailing Airship Part I: Fire Air Balloon). Now I had looked over some of the other questions regarding airships on this site, and thanks to the sparse information I got from that question, I think I can safely eliminate hot air as a viable lift option. From what I can tell between the size the balloon would need to be, the limitation of fire breath, the wildly reduced cargo weight, it seems that the feasibility for that method of air travel was somewhere between “not possible” and “not worth the effort.” This part is going to deal with a bit of a more…exotic solution.

Who remembers The Hallelujah Mountains of Avatar? 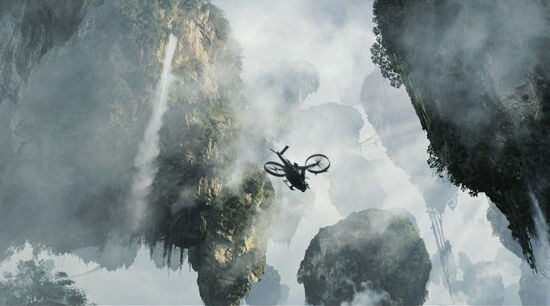 Now according to the lore of the film, those floating mountains are initially ripped from the surface of Pandora thanks to the gravity of its gas giant parent and contain so much of a special room-temperature superconductor that electromagnetic magnetic currents are able to keep them airborne thanks to the Meissner Effect.

I started thinking if a room-temperature superconductor in a powerful enough magnetic field could hold up at least a hundred tons of rock and vegetation, why not an airship?

Then I thought it was so unbelievable that I was considering shelving the idea entirely, until I started listening to The Cartographer the Complete Series on audible, and learned that their airships worked similarly. The mechanics were different and explicitly magical in nature, but it was still magic rock mined from floating islands meaning that a bit more of a Sci-fi take on it might be worth it.

So the question is: How feasible is a large airship held aloft by Room Temperature Superconductor Anti-Ballast?

Note: I am using the term Anti-Ballast because the term Ballast describes heavy material, such as gravel, sand, iron, or lead, placed low in a vessel to improve its stability. The only antonyms I could find were to unload or empty which is clearly not happening here.

Edit: having looked over some of the questions that have been offered as answers to the question I can say none of them work as answers to this one. The one with the robot while using electromagnetism to remain airborne has nothing to do with what I am asking here. I am asking for the feasibility of this airship design, not asking how well it would fly if I crank up the juice which is what the robot is asking. I didn’t find it helpful nor worthy of the tittle Duplicate so please stop suggesting it. As for the floating city, I will grant there were a few concepts that helped a bit. Just a bit. But the primary defining feature of an airship is that it is mobile. Now while I thank you all for the additional reading material, sadly this question remains unanswered, so please don’t vote to close this question before it is even answered!

Well, for starters, the Hallelujah Mountains aren't actually scientifically possible. See, the field strength needed to lock a superconductor in place is stronger than depicted in the movie. For example, humans moving close to the magnetic field should have their blood ripped out of their body by the magnetic strength.

James Cameron was aware of this, but decided that art should trump science in this example.

The second problem is that superconductors aren't repulsors. A type II superconductor in a magnetic field will try to keep the penetrating field constant. Therefore, in order for a ship to fly using this, they would have to fly along magnetic field lines perfectly. This means that a ship can only move in ways that make sense for the magnetic field in the area. If the ship tries to "cross" the field in some way, the entire effect fails. This will severely reduce the effectiveness of such a transportation system.

Here's some more information on that. Notice the "train" in the second video on that site can only move in a specific path, and the effect is strong enough to get it to "bounce" off the ends of the path.

Not the answer you're looking for? Browse other questions tagged reality-check dragons airships superconductors or ask your own question.

11
Arctic Airships, Part 1 - Generating Electricity
5
Will this anti-gravity airship balloon give me a working vacuum airship?
1
Saucer-shaped airship: Is it stronger lighter and better?
14
Armament for airships filled with non-flammable gas
6
Post-apocalyptic aircraft
8
Is a 500 kg flying creature possible?
4
Would a Liquid-Metal battery be practical for powering an airship
4
Additional applications for advanced airships in my earth-like world
0
Dragon Sailing Airship Part I: Fire Air Balloon