In the event of a strategic nuclear war that somehow only hits Eurasia and Africa, would the Americas collapse economically or socially? [closed]

Ask Question
Asked 24 days ago
Active 23 days ago
Viewed 1k times
1
$\begingroup$
Closed. This question is off-topic. It is not currently accepting answers.

Let's say that there's a strategic nuclear war in Europe, Asia, and Africa - only - and does not involve nuclear weapons hitting Australia, the Americas, the Pacific islands, etc. What would the second-order effects be of such a war on everything that isn't in Europe/Asia/Africa, and would they cause a social/economic collapse in the Americas, the Pacific islands, and Australia?

In the case of war at this scale (you essentially picture WW2 in a much more interconnected world), there probably will be world-wide economic and social collapse even without the nuclear option.

p.s. good luck staying out of the conflict as well.

p.p.s speaking of Americas, a lot of countries in the South America are in a social and economical collapse right now, without any world-wide war.

The hardest hit would probably be the loss of imports from China.

This shortage of electronic devices will have severe consequences on the largely digitized society of today. It means computers, cellphones, even household appliances will be irreplaceable for years, if not decades. While this might be inconvenient for private people, just think how this shortage of electronic spare-parts is going to affect industrial facilities and critical infrastructure.

This will also create a negative feedback loop which will make recovery take far longer than one would expect: It's pretty difficult to build a factory for mass-producing integrated circuits when you can not buy any integrated circuits anywhere for controlling all those machines. And assuming you somehow manage to cannibalized all the electronics you need, then it's difficult to run it when you can not rely on your suppliers delivering raw materials on time. Or even on the local power station. (No, they still did not find a replacement for that control chip. Would be easier through eBay. But well, you know how spotty the internet has become.)

Previous answers pointed out the destruction of supply chains due to the nuclear war in Europe, Asia, and Africa. From an economic perspective, the destruction of manufacturing capacities in Asia would be catastrophic (almost 1/3 of global manufacturing is located in China). The electronics mentioned before is just the tip of an iceberg. Today's world is so globalised that virtually nothing can be produced locally. Even food production depends on global supply chains. For example, organic farming may not require imported fertilisers, but it still needs machines and/or machine parts made overseas. It is possible to switch to traditional farming methods that would not require any imported materials or machines, but yields will drop and it might become impossible to feed the existing population. 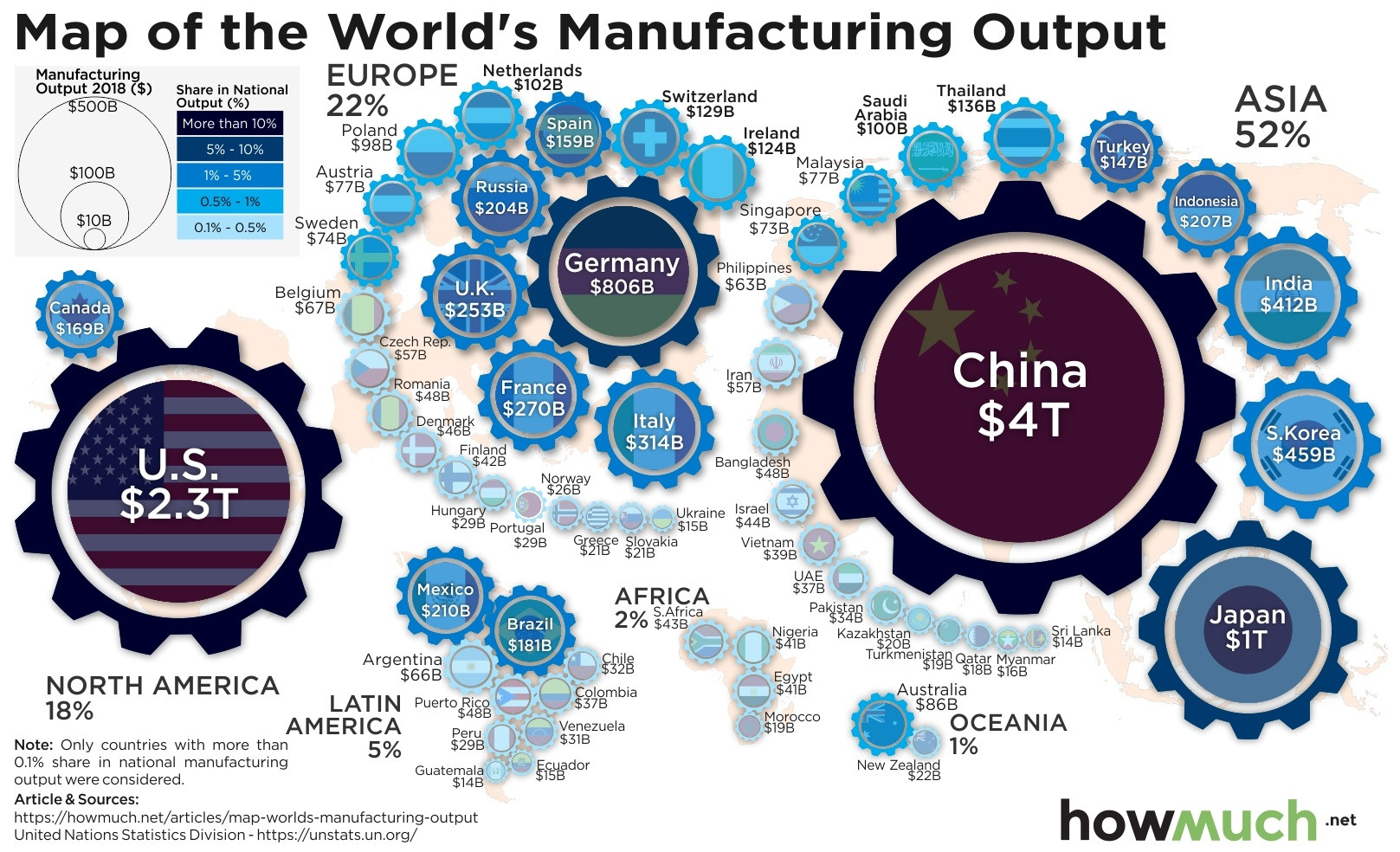 Still, the greatest economic consequences will be caused by the effects of a nuclear exchange on the global climate. Depending on the timing and specific targets, global agriculture may fully collapse. This article in Nature suggests that even a small nuclear conflict would have worldwide repercussions:

Even the relatively small India–Pakistan war would have catastrophic effects on the rest of the world, he and his colleagues report this week in the Proceedings of the National Academy of Sciences1. Over the course of five years, maize (corn) production would drop by 13%, wheat production by 11% and soya-bean production by 17%.

The worst impact would come in the mid-latitudes, including breadbasket areas such as the US Midwest and Ukraine. Grain reserves would be gone in a year or two. Most countries would be unable to import food from other regions because they, too, would be experiencing crop failures, Jägermeyr says. It is the most detailed look ever at how the aftermath of a nuclear war would affect food supplies, he says. The researchers did not explicitly calculate how many people would starve, but say that the ensuing famine would be worse than any in documented history.

Farmers might respond by planting maize, wheat and soya beans in parts of the globe likely to be less affected by a nuclear winter, says Deepak Ray, a food-security researcher at the University of Minnesota in St Paul. Such changes might help to buffer the food shock — but only partly. The bottom line remains that a war involving less than 1% of the world’s nuclear arsenal could shatter the planet’s food supplies.

The most likely outcomes of nuclear war as described are:

Societal collapse as depicted in post-apocalyptic films and literature is highly unlikely. Society will not rapidly degenerate and disintegrate. There will not be street gangs dressed in punk outfits and wearing 1980s makeup. It is also unlikely that all people suddenly decide to arm themselves and adopt 'every man for himself' ideology.

Societal collapses are not something new. There were plenty of them in history. But they are rarely sudden and people still cooperate with each other. It may take decades for a civilisation to fully collapse. This process can be accompanied by social unrest, civil wars, and population decline. However, all of these things will unfold gradually, not overnight.

Most likely the governments of countries unaffected by nuclear exchange will try to contain the situation and develop plans and strategies to deal with the economic consequences of the war. The Americas will be in a slightly better situation than countries of Oceania due to their geographical advantage: Bigger territory, more available resources. I also think that they (the Americas) will have fewer refugees.

The long-term consequences and specifics of restoration efforts (or eventual societal collapse) depend on too many factors and cannot be easily predicted. For example, the USA may stay true to its rugged individualism ideology and refuse to implement any policies mitigating the economic and social consequences of the nuclear war. However, it is also not impossible that the global famine and supply chain collapse would create conditions for the rise of progressivists and socialists and a new New Deal. Both scenarios are realistic and can be supported by developments in US history.

The biggest source of wealth for the US is their role as the world financial center. Wiping out 80% of the world population means taking out a big chunk of the economy that was managed in the US. Add to that the fall in trading in that part of the world that avoided the war and the result is that a big chunk of the US workforce, from share traders to bankers and big managers, would suddenly find themselves unemployed together with the employees of the tech giants that lost their global status. What would do the current ruling class on the verge of losing their power and their status?

Could this situation lead to a coup attempt? This might happen only if the economy is still big enough to pay for the army, the FBI and the police force, but this is not a given and it will depend on their ability to maintain the current food production which will depends on the energy production and here there is another problem. Currently the position of the US seems solid, they are one of the biggest energy producers, but Texas oil wells are partly depleted, there is a lot of work constantly done to keep the production, gas and water injection, new drillings, soil fracturing. This requires a lot of equipment and spare parts. who is going to make them? Who will provide the ships and the equipment to drill new wells under the sea at depths around 1500/2000 meters? How long the gas wells of the fracking boom will last? Wells that rely on fracking are on soil that was not spongy and does not hold so much as the old wells. A chain reaction might lead to a situation where the current rulers have nothing to pay their agents and their pundits and no resources to support their authority.

But that's not enough, because the rulers are the same who control a big chunk of the arable land and mineral production in Latin America. They need also a lot of resources to pay politicians, policemen, soldiers and militias even in that part of the world. But without the backing of the current economy the value of the dollar would go down the drain.

Does it mean the a social collapse would be inevitable? I don't know? Under such unstable balance everything could end up in a widespread revolution or under a big international dictatorship. Some fight will be inevitable also in the part of the world that avoided the war.

Not the answer you're looking for? Browse other questions tagged warfare geography apocalypse nuclear-war or ask your own question.

2
What would be the key differences between real-world nuclear warfare and alternate reality where each nation has only a single thermonuclear weapon?
7
Minimum nuclear weapons required for deterrent?
1
What would the global effects of a prolonged nuclear war at sea be?
8
What are things to consider and keep in mind when making a heavily fortified and militarized border?
5
What would drive the native tribes of Australia to form a kingdom?
11
Why would it take years to decades for aid to reach the survivors of a localized nuclear war?