Is it possible for a land organism to break the sound barrier via running?

Is it possible for a land organism to break the sound barrier via running?

I may make an organism that can move faster than the speed of sound, however on this planet the main components of air is Hydrogen Chloride and the speed of sound in hydrogen chloride is 964 ft/s, 294 m/s, or 657.2 mph.

By this measure, the mite runs 20 times faster than a cheetah and the equivalent of a person running 1300 miles per hour.

One last thing, make it plausible and I would also appreciate if you could tell me the fuel requirements of such a beast.

Not just by running

The fastest wheel-driven vehicle was the Bluebird CN7 which reached 403mph. It has been suggested that its theoretical top speed could be as high as 500mph. This is still a long way off the speed of sound in air (761mph) or the speed of sound in the OP's question (657mph). More recently, the Spirit of Rett achieved 414mph.

The Bluebird CN7 his was limited partly by aerodynamics but also partly by its ability to lay down power at the wheels; and that power came from a gas turbine engine rather than internal combustion. The Spirit of Rett used an internal combustion engine. All vehicles exceeding this speed have been jet-powered.

Does your worldbuilding allow jet-powered creatures?

There is no plausible way that a creature could evolve a jet turbine, as used by post-war aircraft and by land speed record vehicles from the Bluebird CN7 onwards. The mechanics of evolving the compressor stage just aren't possible.

Pulse jets are simple enough though that a creature could conceivably evolve them. V1 flying bombs achieved 400mph and were primarily limited by the control technology, so we're getting towards the right kind of ballpark. Since jet turbines are a mature technology and superseded pulse jets, research on improving pulse jets has been relatively limited, so we can speculate that it could be possible to do better.

But then they're more likely to be flying creatures

If you've got jet power, there's no need to stay on the ground. And more than that, there are evolutionary pressures to not stay on the ground. Running at high speeds, even just on a horse, needs flat surfaces. Nature isn't like that, so if you want to go fast then you need to be in the air, otherwise you die just from hitting a pebble at high speed.

When a car or person is speeding up, their speed eventually stops increasing. This is why cars for example have a maximum speed even at maximum throttle: the combination of inefficiencies of the engine and air drag will increase the faster you go.

Lets assume that you have a perfect engine with unlimited horsepower and only air-drag being a factor, then you are still limited. Even a car pushes off the ground with its wheels. So the contact of the wheels with the ground is what lets it move forwards. This contact is based on the normal force and the friction this can generate with the surface, as well as the materials of the contact surfaces.

Normally a friction coefficient is something like 0.9 (rubber on dry asphalt). This coefficient goes down when the asphalt or rubber is wet, causing the wheels to slip sooner. So lets assume a perfectly ideal situation with a coefficient of 1. This means that you can get the maximum speed out of the friction, which uses the normal force, which uses gravity in its equation.

In that idealized scenario your maximum speed will the equal to the maximum speed you can achieve by gravitational pull. This would be the same as terminal velocity.

A human in belly position reaches around 200km/h. If your creature is more aerodynamic we can equate it to a human terminal velocity when facing straight down: around 290km/h. So you would not exceed that limit.

Let's do it anyway

Let's minimize the speed requirement a bit. Say, your atmosphere would consist of Sulfur hexafluoride (11ºC) the speed of sound would be reduced to 133m/s, which is 479km/h. Now suppose your creature can breath that atmosphere and be as fast as an ostrich (70km/h), it would need to be at least 7x an ostrich height, which winds down to a running bird about 7x2.5 or ca. 17.5 meters tall. See below. 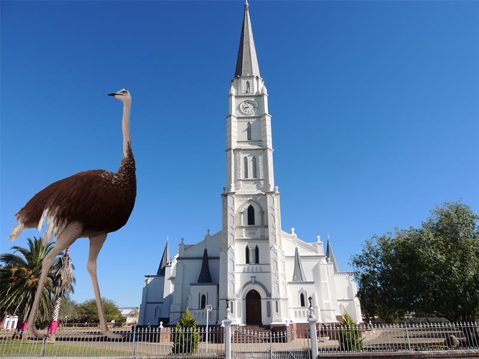 On your planet, with a speed of sound more than 2x my example value, it would stand about 35-40 meters tall.

As far as "fuel" is concerned (I prefer "food" for organisms) this is quite modest for ostriches. An earth ostrich needs about 3 pounds of food per day, mainly vegetables and some insects.

NOTE: taking into account the Square-cube law, my giant ostrich would of course be ca 50x the weight. It needs more food, thicker legs, slowing it down. Maybe somewhere is an optimum to be found ? Or you could lower gravity of course.. Another, more secundary issue is: my Ostrich does not have any incentive to run that fast. You'd probably need a ca 40m cheetah to hunt them.

But it might be possible on a planet with a thinner atmosphere. The speed of sound (unlike light) is not a constant - it depends on the medium the sound is moving through. On Earth, in air at sea level, that's about 340 meters/sec. But on Mars, it's only 240 meters/sec, much more likely to be achievable.

Obviously you'd need to explain how a creature can breathe in such a thin atmosphere, and how it can breathe methane instead of oxygen - or your planet could still have have an oxygen atmosphere, just less dense than on Earth.

On paper, then, it sounds very plausible.

The density of air $\rho$ is 1.225 kg/m3. These fine folks have calculated the $C_D A$ for a subsonic bicyclist to be 0.39. I'm going to estimate A is 1 m2, to pull from this measurement a $C_D$ of 0.39. And this stack exchange question includes an image from Horner's 'Fluid Dynamic Drag' which shows several bodies and gives the shockwave + other drag for a body at around 0.4.

What Would It Take For An Animal to Generate 21 kN of Thrust?

However, area scales as the square of cross-section. For an animal half this cross-section, the mass required drops by a factor of 4 to: 525 kg.

This Answer Does Only Does the Rough Analysis of Biomechanics at the Top. Speed of muscles could be in the regime of the speed of sound in seawater (1,500 m/s). Nerve conduction is much slower at 80 to 120 m/s. But, it appears possible that some animal design may exist that could conceivably go supersonic.

How Much Does This Thing Eat?

Energy is a function of force and distance. If this animal runs in 100 meter bursts, then, it would consume at least 21 kN x 100, or 2,100 kilojoules of energy. Converting to calories, that’d be around 500 kilocalories, or what we usually just call calories.

A similar-mass animal (humans) consumes about a 2,000 kilocalorie per day diet. If this animal could do several bursts per day (maybe a dozen), it would only about triple the animal’s calorie needs compared to a human.

Not the answer you're looking for? Browse other questions tagged science-based creature-design xenobiology .