How close can a launch pad be to a lunar base?

This is for a base that has been built up into a big, complex place. For the radiation safety of long-term residents, the walls are very thick. There are windows, that are quite large. They have quite strong glass, reinforced and double glazed with about half a meter between the panes, so the outer layer acts as Whipple shielding against meteoroids. The rockets are nuclear but their fuel is hydrogen, so there isn't radiation exposure from them. Still, I put the nearest landing pad half a kilometer away in case of explosions. But I wonder if I'm being too conservative. 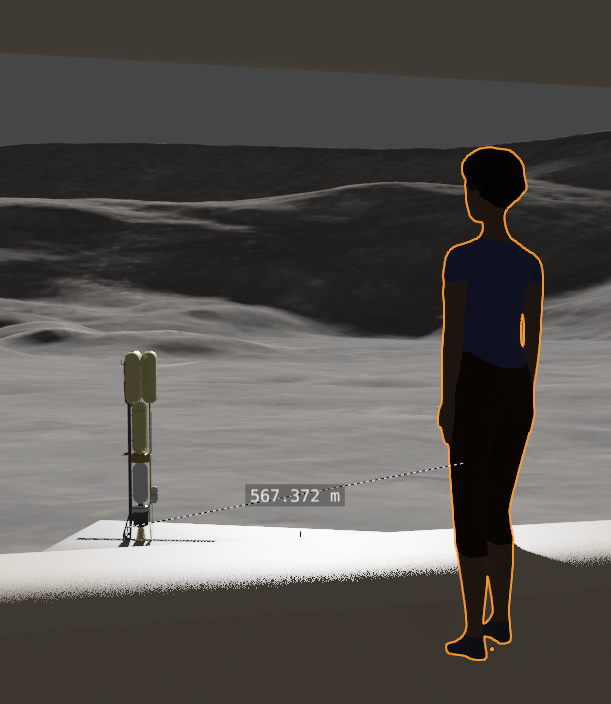 The ships do use liquid oxygen in an afterburner design, it's injected into the nozzle just after the throat so it's never exposed to the nuclear reactor. So the ships are carrying LOX and liquid hydrogen, but they are in separate tanks, in a vacuum. (The LOX is in the smaller tank sticking out near the bottom, the LH2 is in the larger tank to the left of it.) Does the low explosion potential of that arrangement allow the launch pad to possibly be even closer? Or does prudence say just never do that? These ships fly themselves - to hit other structures they'd have to be quite off their final approach and their emergency systems would have to all fail. (I don't know that 'self-destruct' is the way to go in this case. Maybe...)

Bits of debris are not likely to come firing out of the blast any faster than that. The blast is going to be approximately spherical, which means that most of the shrapnel will not be heading towards your viewpoint. It'll arrive as a cloud of irregularly shaped chunks of lightweight metal and composites.

This compares favourably with the speed that you might be expecting meteor strikes to have, which could come in a lot faster than that... up to 72km/s, in the extreme.

The minimum safe separation distance, then, is a function of how much energy your windows can absorb per unit area, and some model of the most dangerous bits of debris coming out of the explosion. That seems entirely too hard to work out, as far as I'm concerned, but with suitably over-engineered windows you could handwave almost any distance away.

does prudence say just never do that?

There are good reasons to be cautious here. You're flying a nuclear reactor strapped to a bomb in front of a viewing deck.

Personally, I'd consider being about 1km away from a debris cloud propagating at 2km/s to be an OK distance. Consider that you have half a second to activate emergency protective systems... a set of safety radars might be able to trigger an explosively-closed blast-shutter fairly promptly, throwing up a curtain of rock and metal that could be as over-engineered as you saw fit.

These ships fly themselves - to hit other structures they'd have to be quite off their final approach and their emergency systems would have to all fail. (I don't know that 'self-destruct' is the way to go in this case. Maybe...)

One possible scenario here is an uncontrolled descent onto the spaceport at de-orbit velocities, which is also going to be at about 2km/s, only there's going to be just one big lump of debris instead of an expanding cloud most of which will miss you.

The roof of the any of the buildings on the surface will probably be quite thick! You might consider that point defense systems (that after all, might be powerful fast tracking laser weapons that could present a serious threat to anything hundreds or even thousands of kilometres away) or range safety systems that would allow someone to remotely destroy a ship, problematic for other reasons (especially for the owners and any passengers!) but then you're in the territory of viewing areas being too risky to allow.

There's also an additional problem you may want to consider.

A bang which throws up debris at 1-2km/s in a vacuum is going to throw that stuff a long, long way. A lot of it is going up and out, and it could pose a serious threat to anything in orbit. That's a reason why you have landing pads by the way, instead of landing on unimproved regolith, because otherwise the debris kicked up by your landing burn could trash the person behind you in your original orbit...

"This is for a game, this decision is for convenience of good visuals and game navigation."

I found that in the comments. That is key! Leave the pad where it is. Then when something blows up the players can see. When it blows up real good it will mess with the base, knock stuff over, hole the windows etc. Best - the players will see the flash and then see and hear the rain of stuff coming across and down. No shockwave though being as it is the moon.

Stuff blowing up is one of the main reasons to play a game! If nothing blows up you might as well stick to cribbage.

I love the idea of the crumple zone on the roof too. Because a player might then survive having something big come down on the roof, then go out and survey the crumplage. That is a French word I am pretty sure.

Not the answer you're looking for? Browse other questions tagged spaceships space-constructs .

18
What would an asteroid base look like and how would it operate?
3
Neutron bomb vs Nuclear Thermal Rocket (NTR)
3
How massive can a spacecraft be?
9
Can I have wind turbines on my base?
3
How can a long spaceship combat torsion and shear stress while moving in space?
5
How Close Can We Build Solar Collectors to the Sun?
4
Can we have a civilization living at close to the speed of light?
2
How would you build an emergency launch rocket?