I read a story about a Mars war. There was a lot of shooting by the Martians, which made me think about insurgents weapons on Mars. It makes no sense to me for all these guns to be accessible. Not having hunting or armies beyond perhaps a police force, they wouldn't have much in the way of guns. So what could they use that would be effective against gun armed Earth oppressors.

Slings seem a great idea, I can sling a stone over 100 mph on Earth. The main drawback with slinging is air resistance limiting range and slowing the missile. The place seems to be littered with rocks if you run out of better ammo.

I'm no great shakes but in antiquity slings outranged bows and you can make one out of just a strip of cloth. So it's easy to conceal unlike a bow and arrow.

To me they would seem an excellent weapon on Mars with less gravity and next to no atmosphere.

Is there anything wrong with this idea?

Unsure where people get their rate of fire ideas from. I can sling every 4 seconds, which is not close to a crossbow and is superior to a bow. That's a relaxed pace, unsure what it would be if I tried for speed.

This is an example of how simple an effective sling can be.

Please refrain from answering if you have no idea what a sling is capable of, or how it is used for anything other than target practice.

It could make a good story.

Slings could be exciting especially if they arrive in the story unexpectedly - of course you would show your bored Martians practicing with the slings at the beginning of the story. They are better than just throwing rocks, which could be exciting too. You could probably throw a rock a long way on Mars. Or one of the Martians could have a staff sling which offers more leverage and power than a conventional sling.

For the story I think the appearance of slings in the story would be more exciting when guns became unavailable or there were not enough to go around; the slingers account for themselves well. The weapon of David has a fine track record of unexpected power and success and you could tap that for your story.

If we are really making strategy for our Martian rebellion I think I will go with 3d printed oxyacetylene air rifles.

Crossbows have a similar fire rate to slings and have better penetrative power. They also leave something sticking out of the target that will cause more damage if they move too much. They can be made in any garage shop with a supply of steel, spring steel, and cable.

There is no reason that the rebels can't make guns. There are new reports of villagers in Afghanistan making guns with fairly primitive tools (wiki).

This is a "Kyber Pass Copy": 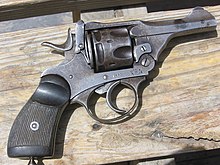 There is another image of long arms but it won't post here. You can see it at the wiki link above.

This is somewhat dependent on the history of technology in the setting. If you want to write The Gulag Archipelago on the red planet, slings fit better. However, if the setting assumes that automatisation and robotics didn't came to a near total stop in the early 21st century, combat bits are the way to go.

Given our current trajectory we'll use a lot of automation in space colonisation. Some Mars colony is in my opinion unlikely to have a large proletarian class. The lower classes simply don't have the resources to get offworld. Robots are cheaper. So a Martian colony, let's call it Teslatown for no reason in particular, is going to have a very rich upper class, whose economic base is still on old Earth. The rich are on Mars because they can afford it. The majority of the population will be in the middle class, scientists and technicians and so on.

So why do the Martians revolt? Fundamentally because Teslatowns investors have interests perpendicular to those of the educated, idealistic and pioneering colonist types. These demographics are in my opinion crucial in understanding the kinds of weapons the Earth security forces will face. Some 16 year old Palestinian kid with no future might yeat rocks at the evil Jews. In the best case he can hope for is getting double tapped and creating a scandal. This way he would help his people the most.

The Martians aren't desperate and without a future, they are annoyed and disappointed. Additionally they have a lot more to loose than someone from the lower classes as well as a lot more historic and technical knowledge.

Armored construction bots, cleaning bots dispersing toxic chemicals and delivery drones with explosives performing precision strikes will be among the things the people of Teslatown can muster with relative ease. It is worth pointing out that the security will most likely be equipped with small arms and riot gear. There is, as you mentioned, little reason to have guns on Mars. There is even less reason to have anti-tank weapons.

In warfare one targets the enemy's weakness with one's own strength, preferably in an overwaeling manner. Go big or go home. The security forces face a hostile population, inadequate weapons and supply lines so long that one would rather invade Russia in winter. Additionally the Corporations in charge face the issue of the PR desaster nuking the place from orbit or landing Espatiers to retake the place block by block would be. The rebellion isn't run by a bunch of fanatics who want to establish a chaliphate. Unless the rebels are stupid (which I established they shouldn't be) they will offer very reasonable demands. Establish a parliament, oversight of corporate policy, guarantees to participate in the colonies economic growth, legalisation of unions, no foreign security forces, better healthcare, those sorts of things. The goal isn't to kill every last enemy, it is to make concessions far more attractive than enforcement of peace.

Finally one must consider the weapons one employs in the context of the campaign as a whole. Strategy and economy's win wars, tactics only decide how much resources one has to throw at a given obstacle. The TOP THREE of this campaign will be 1st: controll of the narrative / public perception, 2nd: seizing the means of spaceflight and production and 3rd: elimination of domestic resistance. Whatever weapons you employ will influence 2 and 3 very directly, but 1 in a secondary manner. Putting loyalists and security forces under house arrest by hacking their accommodations doors, making it attractive to declare loyalty to the rebellion by making it the winning bet and ensuring communications back to Earth show a very positive picture of the rebellion and a dire picture of Teslatowns oppressors until they sign the deal you want is how I would do it. Sling and molotov equipped lynchmobs raiding the Earther District while robbing, murdering and rapeing anyone are detrimental to this strategy. Combat robots and PR campaigns will require fewer individuals and will be more impactful.

Not the answer you're looking for? Browse other questions tagged warfare weapons mars .

23
Could a Mars colony use asteroids as weapons against the earth?
16
How will my nerdy Mars astronauts do battle between their colonies?
9
Making Mars bigger
1
Colours on Mars
9
How to prove Mars landing
17
What weapons would likely be used in a Martian war?
20
Export economy of Mars