I'm new here and I assume that it might be weird to have souls in a science-fiction question but hear me out. While souls in my setting do have some magical unexplainable supernatural properties, it isn't what I want to ask here, this question is about the physical consequences of some properties I'm giving this set up.

I created this field for souls to connect to or reside in, it is an objective reference frame field, where time always ticks at the same rate and space is compressed to a single point. Regular physics do not work there, of course. The Soul Field can gradually transition to regular space-time in the material universe, where physics should be realistic, dictated by relativity and so on. All points in this gradient would map to the slices above and below in order to keep the smoothness, meaning that eventually all points in the universe map to the same, single point of the Soul Field. I decided that the clock rate of the Soul Field should be similar to the CMB frame, since it is the backdrop of the entire universe.

Due to the requirements of my setting, I need communication between souls to be possible, even if one is in the afterlife and the other isn't. In the Soul Field this is trivial, since relativity does not apply there, and since all points are the same. But anywhere closer to the material universe, I expect problems due to general and special relativity making souls perceive time at different rates. The way I tried to fix this was by having the souls move up the gradient, closer to the Soul Field, and send the message in that way, minimizing the effects of both relativities and allowing for faster communication (interpolating between lightspeed and instantaneous depending on how close to the Soul Field they are).

The problem is that my brain is getting stuck thinking about how that would look like for living beings, trying to shift their frame of reference to align with the Soul Field (CMB frame), but without really changing how they move from the outside (this would be bad). One restriction that I already have is that two souls that are in the material universe cannot shift to eachother's perspective directly, in order to obtain maximum alignment they must both be as close to the Soul Field as possible. They can only adjust between their own frame of reference and the Soul Field, knowing that the Soul Field is the same for everyone.

What is the best way to interpolate between a given relativistic frame of reference and an OBJECTIVE frame of reference? And at the risk of breaking the rules: Is there a better way of doing this? (ignore this if I shouldn't be asking it in the same question).

I think a half-baked idea I was having the other day might apply here.

In relativity, there is no absolute reference frame. If there was a clock at every point in space they would all read differently. But presumably, the clocks were all wound at the same time: the "Big Bang". I think you could justify that the soul field is the "place" before the big bang, where only time existed (space hadn't expanded yet). So, running on this assumption that you could read the clock at your point in space, you would know your temporal distance to the singularity. That's your objective reference frame.

I suggest that travel between the soul singularity and our material universe happens in discrete "jumps". Once you know your distance from relativity-governed space to the singularity, you can perform an instantaneous jump to it, and vice versa, from the singularity back to any point in space at its "latest" clock date. I could be wrong about this, but I believe this avoids causality paradoxes associated with FTL--almost. I know you'll need one additional stop-gap1.
You can think of the universe as a kind of bar graph, I guess, where the time on each clock at each point is mapped to the height of a bar in the graph. You can only move between/exist at the very bottom of each bar (the singularity) or the tippy-tops. 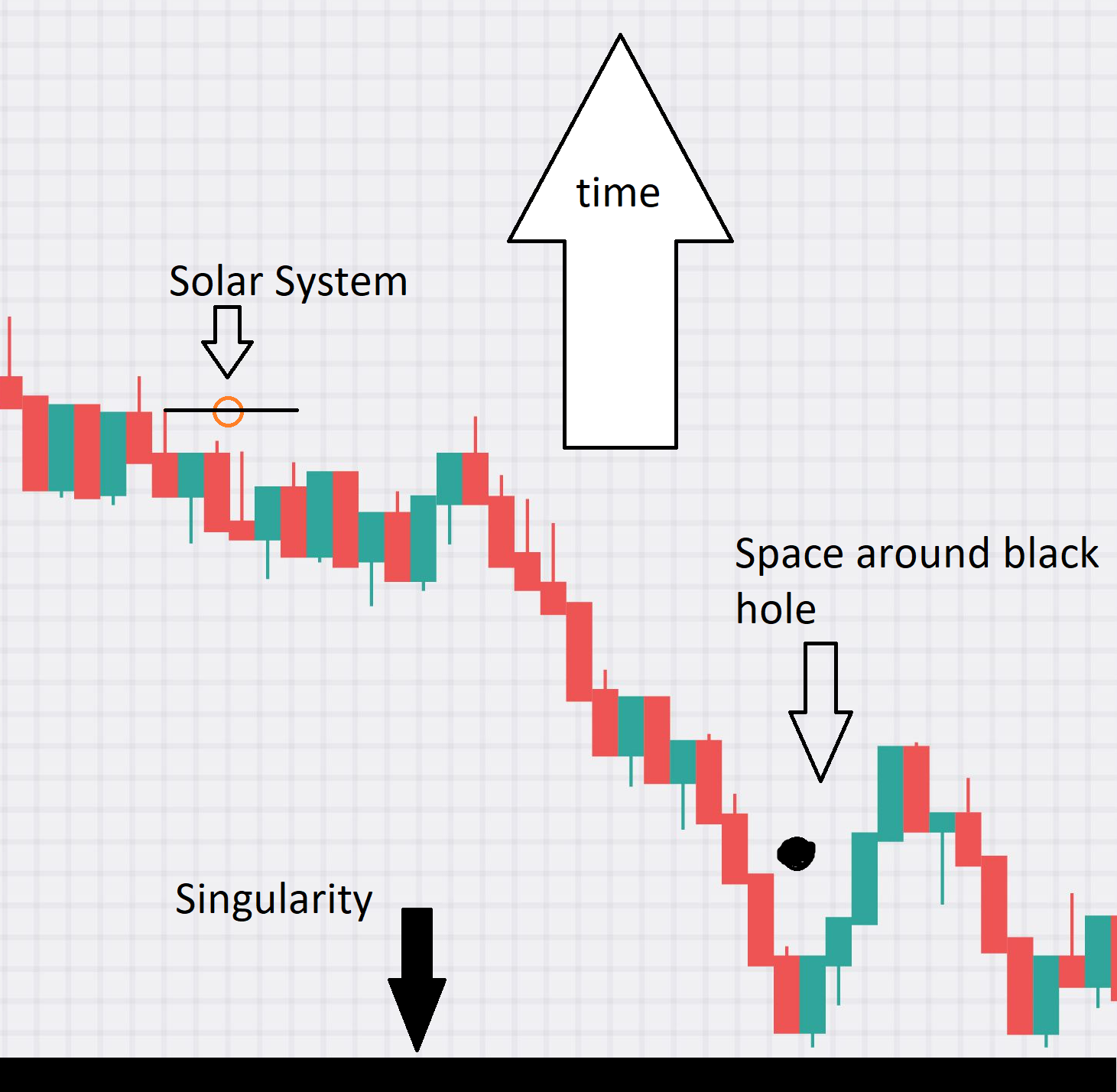 (Important to note, the "bars" all converge at the singularity, which is by definition just a point.)

I think part of what you're asking isn't very feasible. You want a smooth gradual transition from a 1-dimensional "place" of only time to a 4-dimensional place of time and space. I'm not sure you can gradually transition like that. A line can bifurcate and the space between them can become a 2d "universe", and later on, that 2d surface can split to get a 3d volume, but there's always a discrete point where the transition happens.

I don't think the idea of a spaceless line of "time" really jives with the idea of instantaneous communication. Ignoring everything I said and going off your Q, as you recede from relativity-space and head for the soul field, the universe wouldn't shrink but instead grow, as communication becomes faster and more regions of the universe become accessible. Eventually, the entire universe is accessible. This would be my singularity. From the singularity, communication anywhere in the universe could be done (again, only communication to the "tippy-tops" of the universe--the in-betweens are inaccessible). Furthermore, down at the soul field/singularity, there wouldn't be any "time". Information can pass around instantly. Every soul ever would form a kind of geometric construction without space/time dimension.
(And it's kind of poetic, in a way. Every soul that would ever exist burst from the singularity, traveled through space-time, and fell back to the singularity. And every soul is indirectly involved in how the universe takes shape.)
What came first? The universe or the soul?

Anyway, if you want your souls to interact with the universe at the same speed as the universe (at the "speed of time"), ... well, you've already got it. They can only jump to the "tippy-tops", which means they experience time all the same, all the while existing in a dimensionless amalgamation.

I don't have the scientific understanding to answer your question in the physics jargon in which you've asked it. For example, at my IQ-level, "Frame of Reference" refers to the cultural and philosophical biases which a person might bring into a situation. It's a characteristic of the person experiencing the universe rather than an aspect of that universe itself.

But I've listened to enough of the big brains around here to know that you are indeed using your words correctly, despite the fact that I don't personally understand them.

What I do understand is that you are trying to facilitate a situation-limited communication between souls whether they are incarnate within the physical, material universe or existing elsewhere with a soul field. To that question, let me offer a scientifically ignorant but perhaps useful solution...

Instead of defining your incarnate material world brain as a soul cage in which a former occupant of the soul field resides while incarnate down here, make the brain a transceiver through which the soul field occupant interacts with our world. Then make the experience of using the transceiver more than fully immersive. Make it so captivating that the soul's full attention is so enthralled by the idea of three physical dimensions and one-directional time, that it totally forgets its higher existence. For as long as that brain continues to perceive our world the way we see it, our distant yet enraptured soul cannot look away.

With this understanding, the process of communicating with other souls on the soul field requires that you escape from the mesmerizing effects of our reality through meditation, drugs, deep-sleep or fervent prayer. Only when your soul distances itself from three-dimensionality does it remember how to communicate with its brethren.

Communicating with other incarnate souls is handled in the same way, but both enthralled souls need to meditate themselves out of enrapture at the same time.

Not the answer you're looking for? Browse other questions tagged science-fiction physics communication faster-than-light or ask your own question.

4
Could a non-relativistic universe be logically consistent?
6
Can this version of the Alderson Drive be used to violate causality?
9
hypothetical criteria for non-paradox FTL
13
I would like to know if "imaginary velocity" has serious problem
14
How does paradox-free FTL travel affect the details of my story or gameplay?
1
Could a universe with a relativity that is a cross between Galilean and Lorentzian Relativity be self consistent?
3
The Paradox Men - Cosmology
2
Localized manipulation of the speed of light