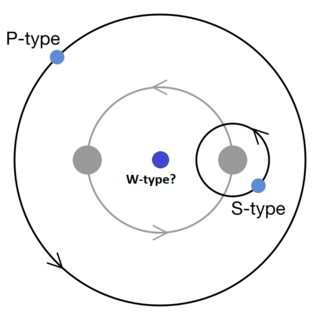 The wikipedia article describes P-type and S-type orbits for planets in binary star systems. There are possibly some other quasistable funky orbits.

But what about a central planet? I have added one to the diagram with its "W-type" nonorbit. The Ptolemy planet is parked between its two suns of equal mass. It does not orbit but sits there in the middle, centered between the stars. Physics wise it seems like it should be stable. How the planet would get there is a different matter - probably it would need to be a construct or perhaps a survivor of a more complex multiplanet arrangement in which other players are now gone and Ptolemy is sitting still.

Of course the stars would need to be suitably far away from each other such that their combined light did not bake a planet that we want to be redolent with sweet alien life. Ptolemy would be outside the habitability zone of either star considered alone, and probably there is no P or S type orbit around these wide spaced binaries that would not bake or deep freeze the planet.

The joint efforts of the 2 stars produce this small habitability zone centered between.

Physics wise it seems like it should be stable

Seems like it is balanced on a bit of a knife-edge... a little nudge towards either star will cause it to accelerate out of position because the gravitational pull from the nearer star will be stronger than the farther star. You'll end up with a plummet to firey doom (or at least, a cometary trajectory that will spread the firey doom out over a few orbits).

The presence of any other body in the system seems like it could upset the delicate balance. Even if it were just these three, I wouldn't want to bet on it remaining stable long enough to develop life.

You are correct that between two large masses there are gravitational equilibrium points. These are known as Lagrange Points.

The unstable Lagrange points are exactly that: points. Any real object with real mass will extend into the area where there are gravity differentials (which are not uniform unless the two major objects are exactly the same mass, density and perfect spheres - so, not stars) and will drift away.

Natural Trojans can exist at L4 and L5. Such systems are only meta-stable in any system with more than 3 bodies (i.e all real systems) because sufficient perturbation from other bodies will knock them out of the stable zone. The rule of thumb for long-term stability is m1 > 100m2 > 10,000m3 for the primary, secondary and trojan respectively. There are certainly binary systems that could meet this criterion.

There are and are planned missions that place satellites at both stable and unstable Earth (and other planets) Lagrange points. While the unstable ones do require station keeping, the fuel requirement is small. This means, for example, that a solar observatory at L1 can be kept on station with minimal fuel, is closer to the Sun than Earth and is always in communication. However, without thrust, an object at an unstable Lagrangian will rapidly drift away.

In the Solar System, the Jovian trojans are about as numerous as the asteroids in the asteroid belt and trojans have been identified for Venus, Earth, Mars, Uranus, Neptune, Ceres and Vesta - some are transient and some are stable.

I don't think that position is stable: any small deviation from the exact center where the gravitational forces balance each other would cause the planet to drift further away.

Also don't forget that the center or mass of the system would be orbiting some other attractor (c.o.m. of the Galaxy), and such an orbit would inevitably result in one of the bodies moving away from the sweet spot, with catastrophic (for the planet) consequences.

Location W is what we would call "unstable equilibrium".

While there is an atom-precise location between two binary stars where gravitational attraction to each star is equal, any perturbation away from that point will lead to a greater attraction to one star that will inevitably pull planet "W" out of that central location.

Furthermore, the same logic applies to making a planet out of the accretion disc at location W: dust will be pulled away by any perturbation.

Planet W is not plausible and cannot exist. The best option for something at location W would be an artifact from an advanced civilisation (with propulsion to hold it in place, or an inevitable orbital decay).

Not the answer you're looking for? Browse other questions tagged planets orbital-mechanics stars .