Staring at goats - What if it had worked?

It is claimed by some that the movie The Men Who Stare at Goats is based in fact. Supposedly the US military funded an experiment that lasted for twenty years and included testing the idea that you could kill an animal or human at a distance by psychic power alone.

What would the world be like now if the experiment had been successful, i.e. soldiers had really discovered how to kill the enemy just by psychically staring at them?

ADDED RULES in response to comments:

(b) How would it affect the detection of crime? (Would there be any detectable psychic signature for example)

(c) How would it affect the meat industry and pest-control industry as far as commerce and ethics are concerned?

(d) Men and women can both have the ability. Would they tend to use it in different ways? (preferably-science based on actual crime statistics of men and women using different weapons)

(d) What other implications are there that I haven't thought of?

My question is different from the similar one that has been indicated.

I'm planning to put a sizable bounty on this question. I'll do it when all the bugs have been ironed out. Please feel free to give comments in the meantime to clarify the rules. When I do award the bounty I'll make sure all the rules and all parts of the question are clear in my question. If you want to give answers now, please feel free. You can always add another answer later or edit your answer. I'll give the rules for awarding the bounty later when I've decided how best to do it. (I haven't given one before.)

Edit: In light of the new rule saying it's a 5 minute (average) kill with a 25 minute cool-down, there are changes.

Warfare
I think warfare would be largely unchanged. This is mostly because this method is so slow. It's mostly impractical for combat because getting the enemy to stand still for half an hour, within visual range, is not dependable. Especially when if you could see them, and had a sniper rifle, then the target and several other targets of opportunity that were standing near by would be dead.

Edit: A 5 minute kill makes this slightly more practical, but still a lot less practical than conventional weapons. A sniper that took 25 minutes to reload would be in a lot of trouble. The one place this would be more useful than a rifle is that there is no maximum range specified, so if you can see someone 5 miles away through a scope, you would be able to kill them, which is far outside a snipers range even in perfect conditions.

What's it good for?
The biggest thing it could be used for is political assassination, when you want to get into an area without having to carry a weapon, and take out a target without anyone knowing who did it. The problem again is the length of time it takes to make it happen.
Political speeches would either be shorter, would have breaks every 20 minutes to break the sight lock, or would be delivered via video.
Secret service agents would be scanning the crowd for anyone that was staring to intently, and there would most likely be physical facial cues that they could look for.
Also, if, like a heart attack, there are any side effects that happen while the attacker is convincing the targets heart to fail, they could duck out of sight. Maybe an emergency trap door that they could trigger to drop themselves into a windowless safe vault.

Edit: A 5 minute kill means most political speeches would probably be televised only, especially for top officials. Someone running for local county commissioner probably wouldn't need to worry, but security around the president, congress, and high judges would be very high.
At some point it would become a security theater nightmare.
In countries with more paranoia than morals, blind servants would be in high demand, possibly to the point of enforced conscription.

Research
There would be huge amounts of funding on psychic detection devices, and things like fMRI would probably be advanced quickly. Any high security location (airports, government buildings, etc) would have screening in place to detect people with the ability to do this.

Detective work
So an autopsy would show pretty quick that the heart was healthy, and just stopped because of psychic attack, and then it's just basic police work. See who has a motive, who was near by when it happened, etc.
Not to much different from someone committing murder with a pistol and then disposing of the gun.
You wouldn't have GSR to detect, but you could test people for the ability using fMRI to see what areas of the brain are active.

Homes
This has probably the biggest impact on the building and decorating trade. Mirrored windows and blinds would be in high demand. Windows without external line of sight, privacy fences and secluding landscaping...

Creative surgery
If the heart is moved to another part of the chest, then it would be much harder for an attacker to target it. It wouldn't even need to be moved very far. This would be very dangerous, and only used by the most paranoid of individuals.

Depending on how the attack functions, something like a pace maker or internal defibrillator might be able to restart the heart or keep the heart going despite the attackers best efforts.

Can I first say, what a collosal failure of the government that failed to contain this weapon and let it become widespread.

Hopefully the governments are tracking their own psychics, but it sounds like it might have become too big to effectively control.

This has significant impacts on warfare. Anyone (Terrorists, foreigns countries, internal dissidents, bored psychopaths) in control of a single psychic power could decimate your political leaders and military forces from the top down, leaving them in chaos.

When you need large groups working together, everyone would need to be masked - this might not save individuals from a "sniper" in their vicinity, but it would prevent images being distributed for future attacks.

Meat industry At one kill per half hour, this power is not efficient enough to impact the meat industry. Unless you can kill way more animals than people. In this case, the ability would need to be pretty common in the population to bother using it this way, and not for something more valuable like warfare.

Psychic tests Put a rabid animal in an enclosed space with a suspected psychic and see what happens. If they didn't survive, they probably weren't psychic.

Crime Autopsies would be able to tell whether someone was killed by a psychic attack (it definitely wouldn't be confused with a heart attack). So at that point your police forces would try to identify who you knew that was a psychic and why they might want you dead - and look for common links. Proving it beyond a reasonably doubt would be even more difficult.

For crime prevention/detection, surely all known psychic could be given some kind of monitoring device that can monitor psychic surges.

Gender It's up to you whether both Male and Females have this ability, and how it might work differently. As for Gender and crime, Men are way more likely than women to be involved in mass shootings, so they might be more inclined to use the power just for random chaos. 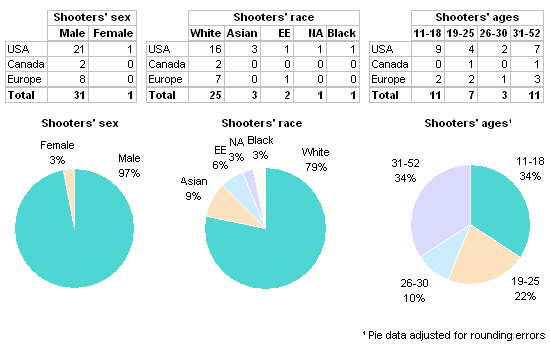 I am going to mostly focus my answer for...

Because the other questions can be decided by what you'd like to achieve with the ability, and would be primarily opinionated answers.

How would this affect warfare?

There are two primary restrictions on this ability.

The fact that it takes so long to kill somebody means that the ability cannot be used defensively. If an attacker approaches you on the street you do not have 30 minutes to stare at their heart. An army of people armed with this ability along with guns does not have an advantage against an army of people with just guns. If you can see them, you could shoot them. The exception is with assassination situations where you could not get a gun close enough.

Assassinations: At first, this ability might succeed in killing off important persons at events. Depending on exactly what the vision restriction is will determine what will happen next though.

Not the answer you're looking for? Browse other questions tagged society crime ethics military or ask your own question.

9
With thoughts that kill: What if one person had that power?

13
How can I successfully prove magical link?
4
How to make a scent seem 'bad'?
6
How would psychics employed by Customs or the Coast Guard use their abilities?
9
What would be the ethics of using test animals in a world where there are spells to speak to animals?
1
Criminal justice if people could live arbitrarily long lives
34
What measures might an early-medieval society take to deal with draugr?
31
How to fool a DNA test (for dummies)
6
Post zombie outbreak world. People who die turn into zombies. Can the government detect murders from natural death + transformation?