What could cause the land masses of earth to move freely around?

In the story I'm making that takes place on an alternate reality of earth in the 1300s, there is an all powerful being that makes all humans immortal. later on he gets angry that not everybody is worshipping him, so he turns everyone but a city of his closest followers into demons and causes disasters around the world. Assuming he can do anything at all, what could he do that would cause the continents to move around the world freely, or the earth move in a way that disregards its axis so that Russia would end up where Mexico is within 100 years?

For more context: After awhile a portal is opened between two alternate realities, the one with this version of Earth that's being destroyed and one where earth had different stuff happen but geographically its perfectly fine. The portal on the Earth being destroyed is on the continent of Russia, and the portal on the Earth that's normal is in central America, but its only between realities so the portal is technically in the same place on both versions of earth.

Back to the main question I'm asking, the all powerful being can do anything, but for story purposes he's only causing problems to punish everybody else on earth. He's not purposely moving the continents, the unstableness of the earth causes it. If so, I'd like a way for it to happen without completely destroying every living thing, but anything is good because the immortal humans will survive either way. As a side note, if a planet had two suns, would that be enough to cause it to ignore its axis?

You can't move the continents. Everyone would explode.

Plate tectonics works by rocks melting and being pushed by magma. 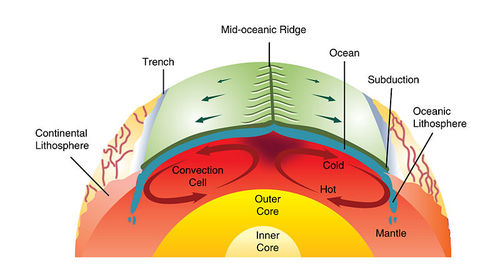 This process is inevitably slow, because the convection cells are made of molten rock and can't move that fast, and it's molten rock floating on the mantle so there's massive amounts of friction everywhere.

This would cause massive earthquakes that would wreck human civilization, as the massive slabs of rock move at incredible speeds and stressors increase. If the god just causes this to happen by pumping up the mantle with energy it would cause enough damage to scramble the immortals for millenia.

You can make the planet tumble

Another star would do it, or having another planet fly past earth. If the god had a bad idea of how astronomy worked and they changed where other stars were or where planets were they could shift the planet.

It would just spin in a weird way depending on what was nearby. Stars aren't great at this, because they tend to be pretty powerful and may also wreck your planet if you get them close to them. Lots of smaller objects over a centuries flying near the planet would work. You'd have a lot of meteor showers and a lot of tectonic activity, but it wouldn't be as chaotic as just shifting around continents.

this may be to simple of a answer.

protect the city from harm. then stop the earth from spinning. to rotate the part of Russia to where mexico is. wait before the would align to finally speed the earth back up again.

none of the actual plates have moved. but the map may be near unrecognisable if you twist it a bunch so that the length of Russia runs more north south rather than east west. the stopping moving then speeding up again would mess up everything if done fast enough. it would concentrate most of the devastation at the old and the new equator.

Not the answer you're looking for? Browse other questions tagged magic planets geography cataclysms .

3
Russia's Alternate Geological History
10
How to defeat an enemy that feeds off energy
12
What would make scientists realize that they are on a toroidal world?
4
Geography of a Super Venus
2
How to explain the presence of a dense debris field around Earth?
5
For my alternate earth, what could cause the position of the axis to change?
11
What could cause a small enough magical apocalypse?