Lately I have been looking into the concept of megalopolises across several works of fiction and futurology, and I have also been wondering wether or not it would make sense for such urban sprawls to feature proportionate suburban areas.

Just to make it clear, when I say megalopolis I don't mean an ecumenopolis (such as Coruscant or Trantor) which would indicate an urban sprawl covering an entire planet, but I refer to something intermediate, such as urban settlements growing over time and eventually merging together to cover vast areas visible from space.

Here is an image to give you an idea of the concept if applied to north america (take from wikipedia): 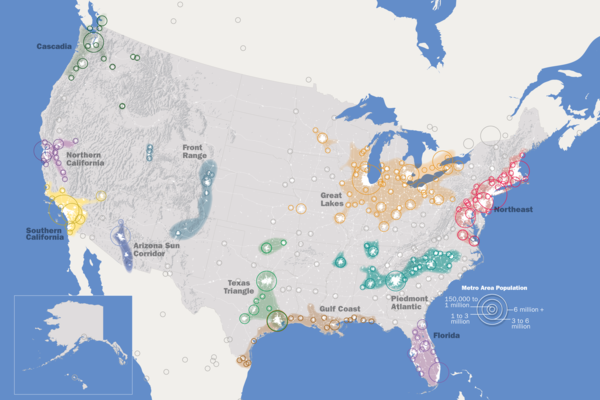 Each of these colored 'blobs' would be a city if the urban sprawls within them merged.

To make it more clear when I say suruban areas I mean low density and at most medium density sprawls, mainly residential zones for the middle class, along with commercial centers.

Would it make sense for such super cities to feature suburban areas post merging?

From a worldbuilding project I did –

The megacity can be modelled as having six different population densities

40% of that area is parks and lakes. (FORTY PER CENT! Has ZERO population!)

This is a population density like a low density town of bungalows, 5000 people per km²

Here things start to get dense and urban. Each person has an average of 23m², a population density of 43,478/km², only about 20-21% denser than Eixample, which "limited building height to 16 metres", and Eixample doesn't feel crazy-dense.

(Note that when I say 20-story apartments, that's not a strict law, just an average.)

This covers 15% of the territory, 3016.32km², and the population density is one person per 10m², more than TriBeCa or Central Tokyo, but much less than Kowloon Walled City. This gives a population of 301.632 million, 60% of the city's population.

Here we get into science-fiction densities, 100-story building the size of the Pentagon. The density is one million per km² or 1m² per person. This is still half of what Kowloon Walled City saw IRL.

Add up the densities and all the populations of the different density-zones and you get the numbers at top. You've expanded Manhattan to be the size of an Irish province. You've crammed half a billion people into an area with 80km radius.

AND YET you did all that while devoting 40% of the area to water and parks, and having 1% of the population keeping chickens.

Most modern urban centres have already swallowed up lots of other nearby urban centres, mostly because as the urban population grows, their suburbs grow proportionately until they meet (which is often the case - a location that can commute to two different nearby urban centres is often going to be more attractive than one on the opposite side with only the one option). If the area between the urban centres becomes higher population density over time, the suburbs will tend to get pushed out to the sides.

If we look back in history (to more easily project forwards), we could follow the example of Vlissigen (New York/New Amsterdam) which was a settlement of its own in 1645, then a town 1683, and became part of New York City in 1898 and is now a mostly residential borough of the city. So if New York City was to continue to expand in population, the towns in the southern part of New York State could get swallowed up, and suburbs could expand towards the other major urban centres as per your diagram.

There are opposing forces to this expansion though - firstly where is the population coming from? While the US population is growing still, it is only growing at below 1% per year and falling, so it will take quite a lot of future to fill up the massive gaps, unless something changes fundamentally in the future around growth/immigration rates.

Secondly there is the practicality - the larger an urban centre gets, the harder transportation gets and the longer commute times from the suburbs becomes, this tends to put a rough upper limit on the size of urban centres if they are exchanging workers with the suburbs - urban centres worked by those that live in the city could expand indefinitely, but that would require a cultural shift in the US at least.

Thirdly there is whether centralized offices and manufacturing sites in urban areas are likely to be the dominant paradigm in the future - given the extra expenses involved in competing for floor space in urban centres, and the extra expenses for paying staff to live in expensive areas or have long commutes, having more geographically distributed set ups seem to have a good chance to out compete them.

Fourthly there is the food problem - if the entire of the Pacific North East becomes suburbs (plus expanded urban centres), where are the farms to feed all those people going to be located - the other side of the Appalachian mountains? But that is going to be right on the doorstep of the Great Lakes megalopolis. Almost all food being transported half a continent or shipped in could make living there pretty expensive, albeit depending on future innovations in transportation technology. Although whether there is enough arable land in the US to support the massive increase in population needed for all the megalopolis' shown in the diagram is another question that depends how far future technology can improve food production density. And if it is going to be shipped in then from where - even if the entire Amazon basin is turned into farmland to feed the American Eastern seaboard, this poses a big food security risk.

Stuart SmithStuart Smith
38955 bronze badges
New contributor
Stuart Smith is a new contributor to this site. Take care in asking for clarification, commenting, and answering. Check out our Code of Conduct.
$\endgroup$
1
Add a comment  |
1
$\begingroup$

Would it make sense for such super cities to feature suburban areas post merging?

Yes, it would make sense. All cities in reality have variable density across their span: high-density bits, low-density bits, medium-density bits. Look at Tokyo or the emerging megaregions in your image.

It passes the reality-check, so if you want to include suburbs, then include them. If you feel it adds texture or variety to your work, why wouldn't you?

I live in the Dallas/Fort Worth area, so it's an example at hand. People joke about Texas having so much room but they put two cities in the same spot. But, most of the metroplex is suburb. There are two large city centers with skyscrapers, but many smaller high-rise areas as well. But there are huge areas of "low-rise" industrial parks and warehouses, and lots and lots of single-family dwellings surrounded by lawns.

I think there will be various forces that draw people together or spread them out, and they can be spread out in different ways. The modern suburb is recent and associated with the USA, driven by automobile culture. On the other hand, look at London with its extensive rail systems allowing huge numbers of villages to exist apart from London in the 19th century.

A new factor to drive spreading out again might be a return to local resources. I have solar power, more than enough for my needs (I sell the excess). A high-rise apartment would not have the same roof to volume area! 150 years ago there were homesteads that covered a couple hundred acres and had all the infrastructure for a farm. It collected rainwater in a cistern, grew vegetables for the kitchen, and had outbuildings for many different specialized activities.

Being "spread out" over 350 acres was largely a consequence of the business of farming and ranching. But more generally, it's a cohesive village that controls its own resources.

In some hypothetical situation, a cohesive village might be a single high-rise apartment building, with public shops on the bottom, apartments on the top, and local businesses easy at hand. You get the same benefits of short commute and short shipping for most common inter-related goods and businesses. But why would you choose a high-rise building instead of a village spread out over a few miles at ground level? If the main industry is information technology, not farming, they might want to cluster around the central servers and fiber optic feed. A village that did some kind of light manufacturing might prefer a low-rise factory campus.

So, suburbs or similar (single-family dwellings, spread out over land) will occur when conditions are suitable to favor that. So have them, in some places.

Not the answer you're looking for? Browse other questions tagged reality-check near-future cities futurology or ask your own question.

4
Classification system and measure of progress for science and technology branches and other areas of life
32
How long would it take for a forest ecosystem to overtake New York City?
6
Planet with large areas of shadow
4
How long would it take for society to forget a language if a new one is enforced upon it?
0
Optimal altitude for an airborne floating island
2
Eternal seasons bind to geographical areas
3
Ideal Place For Kenya Spaceport?
21
Why do people prefer metropolitan areas, considering monsters and villains?